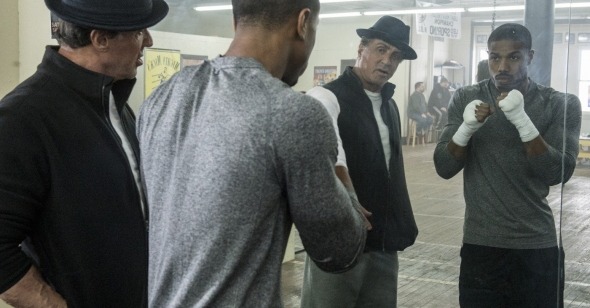 A small detail in Creed, fleeting but worth catching: after winning his first major professional fight, aspiring light heavyweight contender Adonis Johnson (n√© Creed) (Michael B. Jordan) dozes with his girlfriend in front of a television set blaring an action set piece from Skyfall. This is one venerable MGM property nodding to another‚ÄîRocky Balboa, meet James Bond. But it‚Äôs also a strategic pop-cultural allusion in a movie that‚Äôs urgently seeking a split decision between realism and ritual.

Ever since Joe Frazier showed up to bless the main event in Rocky (1976) and smile off the staccato, Ali-esque taunts of Carl Weathers‚Äôs Apollo Creed (‚ÄúYou next, Joe! You next!‚Äù), the franchise has shaped and embraced a reality where recognizable boxers and celebrities rub shoulders, if not trade blows, with fictional creations. Whatever else one thinks of Rocky III (1982), its images of the Italian Stallion frolicking with Miss Piggy on The Muppet Show and staring down both Hulk Hogan and Mr. T (both playing themselves under thinly veiled fake names) just three years before the first WrestleMania event are hardly digressions. Rather, they represent screenwriter Sylvester Stallone‚Äôs clumsy, earnest, and understandable attempts to integrate his uber-palooka alter ego into the very sports-gone-Hollywood nexus he opened up with his first blockbuster outing.

So when Adonis, who has designs on becoming a world champion despite his skimpy Tijuana-based track record, cues up a YouTube video titled ‚ÄúBalboa Vs. Creed‚Äù on a playlist that also features Ali-Foreman and then proceeds to shadowbox against the grainy, rear-projected avatar of Apollo‚Äîthus mimicking Rocky‚Äôs body-shot blows‚Äîit‚Äôs a deliriously complicated multimedia tableau: a visual pr√©cis of everything that the character and the movie bearing his name mean to accomplish. It suggests that the central tension in Creed is how the film, directed and cowritten by Ryan Coogler with Aaron Covington, will style itself as a series sequel-cum-remake in the context of both an onscreen world where Rocky is alive and well and a real world where his exploits loom even larger‚Äîand which comes with a built-in audience that‚Äôs getting almost as old as its hero.

The first part of this equation is arguably trickier. For instance: how to square the gravitas of Adonis Johnson as a fatherless child agonizing over his pugilistic birthright with the memorably silly circumstances of his dad‚Äôs death, beaten to a pulp in the aftermath of a James Brown concert in Rocky IV (1985)? Is it possible to re-contextualize Ivan Drago and his murderous exploits as anything but a dated 80s-baby joke for the likes of Bill Simmons to giggle over on podcasts? The increasing ridiculousness of the roman-numerated Rocky sequels‚Äîwhich reached an apotheosis in Rocky IV, with its smiling Gorbachev lookalike rooting for the pride of Philadelphia in a bout held in Moscow‚Äîis not the most promising context for a movie striving for legitimate uplift.

Creed is also more immediately in the shadow of the unfortunate Rocky Balboa (2007), which was intended as Stallone‚Äôs elegiac self-reckoning √Ý la Unforgiven (1992) but pulled its punches. The sight of a sexagenarian heavyweight standing toe to toe with former WBC champ Antonio Tarver (as Mason ‚ÄúThe Line‚Äù Dixon), even in the scenario of a charity bout, was frankly laughable, as was the predictable redux of Rocky‚Äôs moral-victory ending. It seemed like another late gasp of vanity from a superstar who has had more comebacks than George Foreman and in the process has overdone the hangdog-underdog act to the point of insufferability. But in Creed, Stallone‚Äôs acting, which is tied to but also more complicated than the mere matter of his presence, is the crucial factor which allows the film to triumph within the strictures of the Rocky series, if not quite transcend them.

Whoever was ultimately responsible for the idea of having Rocky Balboa reluctantly manage Apollo Creed‚Äôs son‚Äîand the film‚Äôs long development saga suggests that it may have been Stallone‚Äîdeserves the proverbial pat on the back, as it‚Äôs a shift loaded with enough series-historic and racial and cultural significance to make even casual viewers sit bolt upright with interest, to say nothing of fans. What makes the conceit work on the screen, though, is the delicate humor and, yes, finesse of Stallone‚Äôs performance. He exudes the same less-than-larger-than-life appeal that made the character so endearing before his creator greedily co-opted him into a pop culture icon, while at the same time generously ceding the center of the movie to Jordan, who fills it impressively with a flashy, fleshy star turn.

Take, for instance, the way that Stallone delivers his dialogue, filtering his own thoughtfulness as an actor (which he‚Äôs always had but rarely applied) through Rocky‚Äôs familiarly halting cadences. When Rocky angrily tells Adonis, whom he‚Äôs taken on as a fighter and (of course) a surrogate son, that the connection between them doesn‚Äôt make them family and the younger man storms out, Coogler‚Äôs camera lingers on Stallone as he sits his grizzled bulk down in a chair and he asks himself, dazedly and under his breath, ‚ÄúWhy did I say that?‚Äù It‚Äôs a powerful, reflective moment, imbuing a narrative turn that almost any viewer would recognize as simple screenwriting-class mechanics‚Äîthe temporary breakup of a bromance en route to reconciliation and triumph‚Äîwith a glancing but real sense of regret.

Instead of giving us a Rocky Balboa simply ennobled by his stubbornness and traditionalism, Stallone shows us the ways in which he‚Äôs also let himself become stunted, and while it‚Äôs surely convenient to just file the performance in the trusty ‚Äúself-portrait of the artist‚Äù category and call it a day, it really does feel like it‚Äôs the character working things out for himself more than the famous guy playing him. Almost every development in Creed is predictable‚Äîthis is not an austere screenplay‚Äîbut Coogler doesn‚Äôt condescend to the conventions he‚Äôs taken on. Instead, he energizes them through simple and persuasive means, including the rangy, purposeful use of widescreen (the bobbing, fluid cinematography is by Maryse Alberti, who also shot The Wrestler, as well as Velvet Goldmine and Tape) and a judiciously chosen hip-hop soundtrack that nods to local heroes (Meek Mill gets pride of place) while playfully interpolating the melody of Bill Conti‚Äôs ‚ÄúGonna Fly Now,‚Äù holding back the actual, bombastic fanfare until he really needs it like a fighter preserving his haymaker for the final round.

Certainly, there‚Äôs more to Creed than just craftsmanship and the various ways that it shadowboxes with its predecessors. Critics as diametrically opposed as A. O. Scott and Armond White have suggested how Adonis‚Äôs desperate, potentially self-destructive and finally empowering yearning for a father figure resonates in the post-Obama era‚Äîa subtext that the filmmakers hint at but don‚Äôt exploit for maximum effect. The fact of the film‚Äôs solid box office, and what it might lead to for Coogler as a chronicler of contemporary African-American experience, is also worth unpacking, as is the close relationship between Jordan‚Äôs performance here and in Coogler‚Äôs Fruitvale Station, wherein the actor had to generate a similar physical and emotional charisma en route to a very different sort of foregone conclusion.

Such discussions are going to get hijacked any day now by all the awards-season noise about whether Stallone is going to win an acting Oscar as a bookend to his Best Picture triumph nearly forty years ago. And to some extent, that‚Äôs exactly what he and Creed are going for anyway‚Äîand more power to them. The surest sign that Coogler has honored his source material is that Creed is populist through and through. His achievement, which mirrors Stallone‚Äôs once upon a time, is that he gives his audience exactly what they want and makes it feel like a gift rather than a bribe.