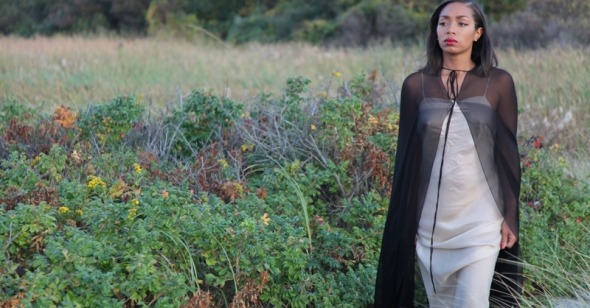 Ganja and Stress
By Ashley Clark

On paper, such material would seem a good fit for Lee. The director has repeatedly broached issues of dependence in his work, from sex in She‚Äôs Gotta Have It, to crack cocaine in Jungle Fever, the drug-dealing ‚Äúgame‚ÄĚ in Clockers, and even the trumpet in Mo‚Äô Better Blues; here, he uses the blood addiction of his central pair as a wide-ranging, unsubtle metaphor for a variety of societal ills, from drug abuse to cultural snobbery. There are also compelling parallels between Lee and Gunn, two African-American directors who, by virtue of their unorthodox aesthetic approaches, subversive artistic content, and anti-establishment views, could be described as mavericks. Gunn, for example, ran afoul of Warner Brothers, who suppressed his 1970 film Stop‚ÄĒa drama about a tortured love quadrangle that remains sadly buried today. The same studio gave Lee such a rough ride over the budget of his 1992 epic Malcolm X that he had to go cap in hand to celebrity African-American funders (including Oprah Winfrey, Prince, and Michael Jackson) to complete it. Since Malcolm X, Lee has complained about the difficulties of getting black-centered movies funded, and for his latest, he worked outside the system altogether, launching a successful Kickstarter crowd-funding campaign for $1.4 million in 2013. The production saw Lee getting squarely back to his indie roots: it was shot over a brisk 16-day period.

That Lee is working with a newfound freedom becomes apparent in Da Sweet Blood's gorgeous first moments. In an era where the excision of opening credits in favor of a cold open has become increasingly commonplace, Lee is the rare filmmaker who understands both the mood-setting potential and the opportunity for unfettered stylistic expression offered by the credit sequence. We‚Äôre treated to a languid montage in which the lithe young street dancer Lil Buck ‚Äújooks‚ÄĚ with tough, sensual elasticity against a changing backdrop of Brooklyn locations (basketball court, riverfront, project housing). These images‚ÄĒwhich are set to a plangent piano score from regular collaborator Bruce Hornsby‚ÄĒblend the micro-travelogue beauty of the monochrome stills that opened She‚Äôs Gotta Have It with Rosie Perez‚Äôs pugnacious B-girl bopping in Do the Right Thing. It‚Äôs a poignant, deeply personal way to begin, rooting the film in a specific slice of New York inhabited by historical ghosts both real and imagined: Da Sweet Blood of Jesus is the seventh film in Lee‚Äôs loose ‚ÄúChronicles of Brooklyn‚ÄĚ series, following She‚Äôs Gotta Have It, Do the Right Thing, Crooklyn, Clockers, He Got Game, and Red Hook Summer. I have a history here, the 57-year-old Lee seems to be saying, and I still have stories to tell.

Lee then thrusts us back into the Lil' Piece of Heaven Baptist Church, locus of 2012‚Äôs Red Hook Summer‚ÄĒa messy but sorely underseen meditation on the declining role of the Christian church in the impoverished, eponymous African-American community. In fact, we seem to be picking up almost exactly where we left off. Disgraced pastor Enoch (the reformed pedophile so brilliantly portrayed by Clarke Peters) has now died‚ÄĒperhaps of shame‚ÄĒand been replaced by Bishop Zee (Thomas Jefferson Byrd, the craggy-faced Lee stalwart you‚Äôll remember as the AIDS-addled junkie in Clockers, or the morally bankrupt MC from Bamboozled). In his fire-and-brimstone sermon, Zee preaches about the deleterious effects of gun violence in the community, and the rapt attention he receives from his modest audience suggests that his concerns are shared by the parish. If his words seem like thinly disguised bullhorn sermonizing from the film‚Äôs director, the energy and stylistic brio of the scene makes it‚Äôs difficult to care; the church interior is ablaze with reds, golds, and purples captured by cinematographer Daniel Patterson, whose digital lensing is impressively crisp and precise throughout. Then, once we‚Äôre introduced to Dr. Hess Green, we discover‚ÄĒin one of the film‚Äôs precious few subtle touches‚ÄĒthat the pastor also moonlights as Hess‚Äôs chauffeur; a detail which suggests that although an active participation in religious community might provide spiritual nourishment, it doesn‚Äôt offer economic succor, and class boundaries remain rigidly defined.

So far, so good, but Da Sweet Blood comes off the rails almost as soon as the narrative proper begins. Gunn‚Äôs original is certainly perplexing at times (there‚Äôs plenty of chronological crosscutting and odd flashbacks to a mysterious African tribe), but its bleak spell never dissipates, largely thanks to the evident seriousness of Gunn‚Äôs intent. By contrast, Lee‚Äôs film is prone to lurches from ill-advised slapstick comedy‚ÄĒworst offender: Rami Malek‚Äôs effete mugging as Hess‚Äôs butler‚ÄĒto gruesome violence to labored attempts at sensuality, often in the same scene. Da Sweet Blood‚Äôs problems are most clearly exemplified in the confused and/or confusing way it positions the crucial character of Dr. Hess Green. In Gunn‚Äôs original, Hess, as essayed by the towering, glowering Duane Jones, seemed bedeviled by remorse at every turn, oozing a palpable ache at having to leech from lower-class African-Americans to satisfy his addiction. This new Hess, in contrast, marauds around, seemingly getting off on his bloodsucking adventures. In one scene he swaggeringly passes himself of as a playboy named Dick Long; in another he raids a blood blank like he‚Äôs pilfering from a candy store. Hess‚Äôs brazen callousness makes no sense when set against scenes of his apparent remorse, and also badly undercuts the dramatic impact one should feel from his ultimate salvation in the bosom of the Lil‚Äô Piece of Heaven church.

Williams gives a curious turn, delivering much of his dialogue in a flat mutter while wearing an unreadable expression, in the process joining Bamboozled‚Äôs Pierre Delacroix (Damon Wayans) as another of Lee‚Äôs stilted, moneyed outliers. It‚Äôs impossible to discern whether the actor delivers a poor performance, or whether he‚Äôs being inadequately directed. One thing, however, is clear: he shares little chemistry with Abrahams. Given that the film hinges on this relationship, the absence of spark is a significant problem. The British actress gives a committed performance, but errs badly in replacing the studied haughtiness of Marlene Clark in Gunn‚Äôs film with a flat-voweled obstreperousness (‚ÄúIf I had two balls and a dick I‚Äôd be a bloke,‚ÄĚ she huffs coarsely in one of her first scenes). To make matters worse, Lee‚ÄĒin a departure from Gunn‚Äôs original‚ÄĒfoists a lesbian love interest upon Ganja to fondle in a soft-focus shower scene. It‚Äôs less a cheering blow struck for sexual fluidity than a doomed, clammy-handed bid for titillation on the part of a director with a demonstrably patchy record on sexual politics.

Worse still, Lee unwittingly acts as self-saboteur with his musical choices. In a generous, community-spirited gesture, Lee issued an open call for unsigned artists to contribute to the soundtrack, before selecting twelve songs for the final film. Yet many of these‚ÄĒwhich run the gamut from squalling rock to clattering, skeletal hip-hop‚ÄĒact as noisy, brutish impositions on dialogue and mood. These intrusions feel even more crushing in light of how crucial musical texture has historically been to Lee‚Äôs work. Consider the inspired use of extra-diegetic music that has shaped and defined some of his most potent scenes: Sam Cooke‚Äôs ‚ÄúA Change Is Gonna Come‚ÄĚ in Malcolm X; Public Enemy‚Äôs ‚ÄúFight the Power‚ÄĚ in Do the Right Thing; or Stevie Wonder‚Äôs ‚ÄúLiving for the City‚ÄĚ in Jungle Fever. Da Sweet Blood of Jesus just bombards us with sensory overload by way of Lee‚Äôs misplaced altruism.

Yet, for all its flaws and eminently questionable artistic qualities, Da Sweet Blood of Jesus at least finds Lee back in playful, experimental form after the joyless Oldboy (which was, tellingly, the first Lee film to be released without the quirky ‚ÄúJoint‚ÄĚ appellation). It‚Äôs his most gleefully excessive, least easily readable film since Bamboozled, and accordingly the most ripe for interpretation. The question, however, is whether viewers will be prepared to return to this messy, bloody stew‚ÄĒwhich runs to a chronically distended 123 minutes‚ÄĒto pick the bones out of it.