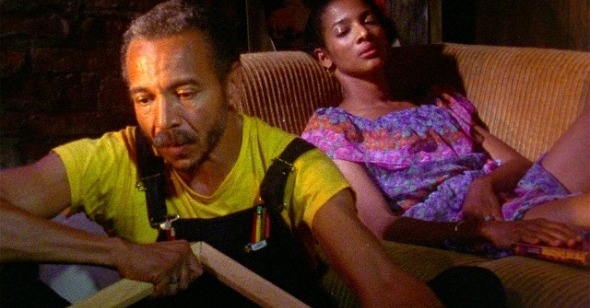 When a historically important film emerges from obscurity‚ÄĒas Kathleen Collins‚Äôs neglected, never theatrically released Losing Ground (1982) has done thanks to Milestone Films, the Film Desk, and the Film Society of Lincoln Center‚ÄĒit‚Äôs almost inevitable that its historically important elements will overshadow its singularities, its idiosyncrasies, its autonomy. But as crucial as it is to reclaim Losing Ground as a vital, vibrant, retroactively canonical independent film by an African American female director‚ÄĒmade when African American female directors were even scarcer than they are now‚ÄĒit‚Äôs no less crucial to view Collins‚Äôs film on its own defiantly individualistic terms. The film doesn‚Äôt shrink from its own significance‚ÄĒafter all, it opens with a smart black woman addressing a classroom of rapt university students‚ÄĒbut within the narrative it‚Äôs a starting rather than an end point.

From that first scene we know that Sara Rogers (Seret Scott) is black, female, and a professor of philosophy. (Collins spends zero time explaining or establishing what it means that she‚Äôs any of these things‚ÄĒthey‚Äôre evident facts.) And by the end we only know that we, and she, have just begun to learn who she is, and who she might become. Collins introduces us to Sara and her painter husband, Victor (Bill Gunn), at a pivotal point in their lives. To celebrate Victor‚Äôs sale of a painting to a New York museum, the couple takes a sojourn upstate for the summer, which reinvigorates Victor and destabilizes Sara. Victor‚Äôs artistic interests have shifted away from pure abstraction toward the representational‚ÄĒto landscapes and people and particularly the brassy Puerto Rican woman down the street. Meanwhile Sara feels exiled in the rural setting‚ÄĒthe local library doesn‚Äôt have the academic titles she needs‚ÄĒyet seemingly provoked by advances from students and colleagues (which come as a surprise due to her studied air of professorial brittleness), she‚Äôs also suddenly stirred by thoughts of the ‚Äúecstatic experience,‚ÄĚ first as an intellectual pursuit and then, eventually, as an emotional and physical one. She consults the literature, she visits a clairvoyant, she visits a church, then ultimately submits to an artistic process in which she can give up control in order to gain some measure of it.

She wishes to experience things more directly, without an intellectual filter, and he wishes to engage with the messy actuality of the world rather than from the remove of pure abstraction. Victor strays beyond their marriage to feel into his transformation, which she seems to expect and even begrudgingly permit‚ÄĒthis clearly isn‚Äôt the first time he‚Äôs discovered himself by discovering the charms of another woman. What truly causes conflict, and thus is clearly a new challenge for them, is her corollary transformation, her feeling into a new understanding of herself. She accepts the lead in a student filmmaker‚Äôs movie, and thrills to playing a more expressive, sexualized version of herself‚ÄĒone who dances and swoons, and exudes rather than caps charisma. It‚Äôs not that she fully becomes a different person, it‚Äôs that the clothes of this person fit far better than she‚Äôd anticipated. Victor‚Äôs machismo can‚Äôt bear the loss of control, or the sight of Sara‚Äôs handsome, baritone-voiced costar, but most unlivable is the loss of his wife‚Äôs dependability, her steady blandness that gave purpose and shape to his eccentricity and buoyancy. If she no longer makes sense to him, it seems he can‚Äôt make sense of himself either.

Yet it's not just marital or societal subjection she's up against‚ÄĒit's also her own personality and character. It‚Äôs not that she‚Äôs a product of anal retentiveness: her own mother is an actress and avowed sensualist who has an easy rapport with Victor, and seems utterly baffled by Sara‚Äôs intellect. Her mother and others hint that her light-skinned daughter‚Äôs academicism is a "white" pursuit, an effort at upward mobility "castle building.‚ÄĚ (She‚Äôs even typecast in the student film, which the director describes as ‚Äúa take off on the theme of the tragic mulatto.") But Collins never lets it be that tidy, never anchors the movie or her character in externally imposed definitions, even if others can‚Äôt help but project those impositions.

All told, it‚Äôs a rich stew for an adult drama. Each of them strains against both how they're perceived and how they perceive themselves, and both Gunn and Scott project contemplation and engagement with all this instability and irresolution. There's awkwardness in how some of this is expressed and dramatized in the film‚ÄĒmuch of Scott‚Äôs line readings come off as line readings‚ÄĒyet there's truth in the awkwardness. Since Sara is a character that performs a self as much as she inhabits one, why wouldn‚Äôt artificiality be present in how she talks, why wouldn‚Äôt she move through space as if she‚Äôs trying to hit a mark? It‚Äôs unclear if Scott is channeling awkwardness or if Collins cast the nasally, angular actress in order to harness it, but what at first seems disconnected from the film‚Äôs purpose emerges as integral. By film‚Äôs end, Scott is performing a tango in a leotard, as regal, self-inhabited, and singularly appealing as anything else we‚Äôve seen before us. Collins isn't just contemplating liberation and individualization, she's sussing it out dramatically, filmically. (Her only other film, the 49-minute short, 1980‚Äôs The Cruz Brothers and Miss Malloy, is no less interrogational of form, and no less liberated artistically. Collins had the temerity, it would seem, to make it not about African Americans, but rather three orphaned Puerto Rican brothers‚ÄĒalso living upstate‚ÄĒwho are haunted by their deceased father, whose point of view is represented by the camera itself.)

All the while, Bill Gunn does as Bill Gunn does, stalking the set with Cassavetean magnetism, playing around with pauses and grins and chuckles so that even stilted moments seem at least naturally so, and wearing an assortment of yellow terry-cloth t-shirts, red Izods, and black overalls like he was in the proud and glorious altogether. His cocksureness and onscreen charisma present an insurmountable challenge to Scott, but the text of the film eventually rises to acknowledge this fact. Collins doesn‚Äôt intend for Sara to out-dick Victor, to become the brand of barker and carouser that he‚Äôs permitted to be thanks to his masculine birthright. What she intends is for Sara to notice and feel, finally, the inequality‚ÄĒan inequality not of desire, but of license. "Don't you take your dick out like it was artistic. Like it's a goddamn paintbrush,‚ÄĚ she says, in the film‚Äôs penultimate scene, when Victor aggressively toys around with another woman in front of Sara. ‚ÄúMaybe that's what's uneven. That I got nothing to take out."

As in that doozy of an excoriation, dialogue in Losing Ground can be a bit bull‚Äôs-eyed, the themes a touch too underscored. But at the same time, these themes are too rarely explored in cinema of any kind, from any era, for the film to suffer from being overly emphatic. And though Collins was an African-American female filmmaker who was working basically alone in that capacity, what she does is scarce for any filmmaker of any race or gender. She‚Äôs articulating and dramatizing that which is habitually inarticulate and not seemingly dramatic. She explores what makes any of us who we are, and what any of us might learn or become if we knew ourselves a little better. As the title says, Sara is losing ground. But she‚Äôs also gaining air, and there‚Äôs literally no knowing where it will take her. It‚Äôs the not knowing that seemed to motivate Collins, the potential for creating characters that are as opaque and confused and irreducibly human as any one of us are‚ÄĒor could be, if we‚Äôre brave enough to admit it. Instead of a character comprised of what others need and expect her to be, Sara is at least beginning to understand herself from the inside out. And with this sole feature film, Kathleen Collins, who died in 1988, was beginning to do the same with her art.