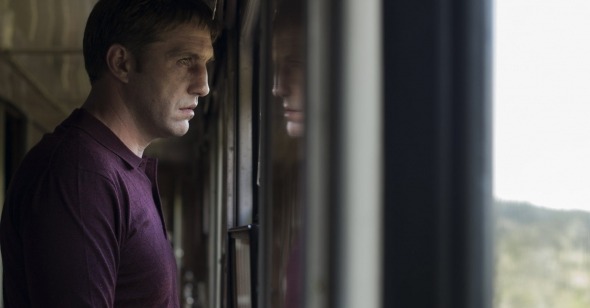 The World at Large
By Eric Hynes

Canst thou fill his skin with barbed irons? Or his head with fish spears? / Lay thine hand upon him, remember the battle, do no more. / Behold, the hope of him is in vain: shall not one be cast down even at the sight of him? / None is so fierce that dare stir him up: who then is able to stand before me?
Job 41:7-10, King James Bible

The film ends the way it starts: staring awestruck at the violence and majesty of nature. At the beginning, we move progressively inland via a series of shots‚ÄĒfrom waves crashing against rocks, to the edge of the shoreline as seen from a distance, to electrical poles dotting an otherwise pristine hillside landscape, to a house on a bluff; at the end, we reverse from this same location, progressively returning to the wild, uncontrollable sea. In between, we encounter people and civilization, and are forced to reckon with how the former are barely better than beasts, and the latter is a lie. But it‚Äôs less a condemnation than a resignation, as illustrated by that pendulum swing back to sea. The degree to which such resignation reflects the film‚Äôs point of view, and not just of its beleaguered characters, is an unsettled ambiguity at the heart of Andrei Zvyagintsev‚Äôs extraordinarily accomplished movie.

While the title is unambiguously a Biblical reference, its applications are manifold and relative. In the book of Job, the Leviathan holds sway over man, while God holds sway over the Leviathan. Power is awesome, it is total, and it is beyond question. In the movie called Leviathan‚ÄĒin which Job is invoked both implicitly and literally‚ÄĒwho or what is the Leviathan? Who holds sway over whom? It entirely depends upon whom you ask.

For the beautiful, inward eye-darter Lilya (Elena Lyadova), the beast might be her husband, Nikolai (Aleksey Serebryakov). They live, along with Nikolai‚Äôs teenaged son, Romka, in a wood frame house beside a scenic lake in rural Russia‚ÄĒa relic of an older, perhaps ancient world that‚Äôs been encroached upon by electrical towers, a modern bridge, and multifamily houses. Nikolai is a careening hulk of a man, a blonde tower of granite, projecting his masculinity about the house via window-rattling barks, knee-buckling glares, and table-hammering fists. As played by the dependably terrifying Serebryakov (he played another don‚Äôt-wake-the-monster patriarch in Aleksey Balabanov‚Äôs Cargo 200), he‚Äôs like a perma-drunk, dolted-down Klaus Kinski, equally enraged at himself and the world.

But for all his physical command, Nikolai has a Leviathan of his own: the town mayor, Mer (Roman Madyanov), a corpulent, unscrupulous excuse for a man who‚Äôs determined to seize control of Nikolai‚Äôs house to suit his own secret ambitions. Nikolai has ownership, history, and of course physical intimidation on his side, but being an office-holder in modern Russia, Mer has near-absolute authority. He conspires with the town judge and the police chief to ensure that the law is corrupted to support his aims, and that Nikolai is effectively clubbed at the knees and controlled. Within his little fiefdom, the closest Mer comes to facing beastly oversight is a well-heeled, shifty priest, who manipulates, shames, and goads Mer into serving the church‚Äôs needs by any means necessary.

Into this musky masculine swamp swims Dmitriy (Vladimir Vdovichenkov), a stolid, Jon Hamm‚Äďhewn Moscow lawyer who‚Äôs come to help his old army buddy, Nikolai, fight Mer‚Äôs land grab. When front-door justice is denied, he goes through the back door to blackmail Mer with proof of personal and professional malfeasance that would destroy the despot‚Äôs career. As we come to learn, the legalistic Dmitriy is an atheist, unimpressed by the mythic intractability of the situation, by the David vs. Goliath role-playing and dick-swing-swagger between these men, and thus it‚Äôs no surprise that Lilya will soon cling to Dmitriy like a lifeline‚ÄĒwe‚Äôre right there with her. But he adheres to a myth of his own, which is that there‚Äôs any such thing as the law, logic, or civilization in this world, and that one can escape the intractable, seemingly divine fact that the worst will always happen and must be endured. He‚Äôs a rationalist rendered powerless against absolutists, who are capable of doing literally anything, such as act irrationally, to get what they want. When he offers to take Lilya back to Moscow with him, she reacts as if he‚Äôs talking about a fantasyland, and within her conception of morality and society, he is.

While Dmitriy‚Äôs citified atheism sets him apart in these parts, even as others discuss, evoke, and patronize the Christian god, evidence of grace is scarcely to be found. When kids gather in the shadow of a half-demolished church, it‚Äôs to get drunk‚ÄĒvodka being the true opiate of the people. When half-mad, cruelly broken Nikolai finally encounters a true man of god, a humble priest who labors for the poor, he‚Äôs not shown affection or redemption, but reminded of the trials of Job. Things can be worse. Resignation. Endurance. Go on. Or don‚Äôt. It‚Äôs all the same. The closest we come to seeing god is a portrait of President Putin on the wall of Mer‚Äôs office, presiding over man‚Äôs misdeeds, unblinking, unmoved, tacitly approving.

Beyond being an accurate bit of set direction‚ÄĒthe president‚Äôs framed visage commonly hangs on the walls of State offices‚ÄĒthe centrality of Putin‚Äôs image in these scenes serves as Zvyagintsev‚Äôs bluntest political broadside. He‚Äôs not just witnessing Mer‚Äôs rank corruption of law and order‚ÄĒhe‚Äôs legitimizing it. Putin is invoked again later, when Dmitriy and Nikolai join a few policia buddies (and their families) for a picnic excursion involving spirited gunplay, with glass-framed portraits of former premiers and presidents‚ÄĒGorbachev, Brezhnev, etc‚ÄĒserving as target practice. ‚ÄúIt‚Äôs too early for the current ones,‚ÄĚ someone says. ‚ÄúLet them ripen up a bit.‚ÄĚ It‚Äôs a funny moment, but one defined by a common ‚Äúfuck the politicians‚ÄĚ enfeeblement. It‚Äôs only when the gods have fallen that anyone can reach them.

In a sense, Putin is also staring down from the walls of Leviathan itself, being that it‚Äôs a film partly funded by the State. It‚Äôs a critique of abuse of power, while also ultimately and inevitably a capitulation to that power. We‚Äôre left with the sense that no matter how unjust certain actions and situations may be, they can only be endured. The picture painted may be ugly, and it may be angry, but it‚Äôs not a call to arms; it‚Äôs the humbled Job that we turn to here, not the agitating Christ.

A measure of audience endurance is required for the film‚Äôs latter half, when masterfully pent-up portent is released into an unsubtle explosion of symbolism‚ÄĒa suicide is preceded by the (admittedly gorgeous) sight of a giant whale slicing out of the ocean; the young Romka fleeing from his broken home for an (admittedly gorgeous) lonely jag on a beached whale skeleton; an ungenerous cut from feeding pigs to a weight-challenged human. But Zvyagintsev‚Äôs exquisite and ambitious image making makes these overbearing tendencies less bothersome than they might otherwise be. Every composition, every cut, every character‚Äôs glance, movement, and utterance means and expresses more than most movies can manage over their durations. From nearly the first sidelong glance, Zvyagintsev so utterly conjures a culture of violence that he hardly needs to depict it. It‚Äôs less implied than inherent.

Such peerless craftwork can make things feel a bit locked-off and overdetermined‚ÄĒsuch has been said of Zvyagintsev‚Äôs equally impressive previous films, The Return, The Banishment, and Elena‚ÄĒbut it also serves the film‚Äôs greater pessimism. The gears turn, the men drink, and the days end. And most crucially, such airlessness is counteracted by the performers, who stir scenes away from being strictly allegorical, and who complicate Zvyagintsev‚Äôs exquisite frames by imbuing them with fitful life. Lyadova in particular nails a blend of scorn, desperation, and faintly glimmering hope that offers the audience a crucial access point. When she exits the film, all really does seem lost.

Leviathan can feel as constrained as Job, and as forbiddingly spectacular as the beast, but it‚Äôs fleetingly free when it plays god, answering to no master other than itself. At the halfway point, immediately after Dmitriy and Lilya have wandered away from the other daytrippers, gunshots are fired off screen, and we‚Äôre left wondering after the fates of our three lead characters, as well as two children, not to mention a marriage already in peril. Instead of panning or cutting to the action, Zvyagintsev sends us somewhere else entirely, to Mer and his flamboyant priest, setting up another conflict before clarifying the current one. Then we cut to Lilya and Dmitriy racing away in a car, their faces bloodied but facing forward, their immediate past and ultimate destination unknown. Alas their fates prove as unavoidable as we‚Äôve been led to believe they‚Äôll be, making the air of possibility to this scene more punishing in retrospect. But thanks to this construct of cinematic suspense, Zvyagintsev lets us feel, if only for a moment, that anything could happen. Would that it were true, and would that this society of Jobs could have something other than resignation to look forward to. For it‚Äôs one thing to wax allegorical about the state of a society‚ÄĒto conjure an endless chain of gods, monsters, and suffering fools‚ÄĒand another, far more troubling thing, to recognize very little daylight between such allegory and reality.