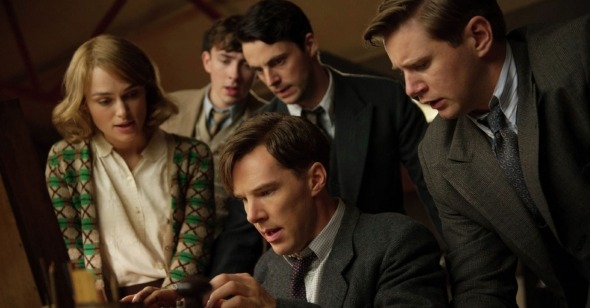 Begging Your Pardon
By Justin Stewart

In 1952, mathematician, cryptanalyst, and computing pioneer Alan Turing admitted to engaging in gay sex and was convicted of ‚Äúgross indecency.‚Äù He was given a choice of imprisonment or quack-medicine hormonal treatments that amounted to chemical castration. Faced with being locked away from his work, inventions, machines, and the outside world, he chose the latter. The treatment ravaged his body and mind and within two years he was dead, having committed suicide by eating a cyanide-laced apple. Fifty-five years later, England officially apologized and then, in December 2013, the Queen granted Turing a royal pardon. Since one meaningless, too-little-too-late gesture deserves another, Turing has now been further apologized to with a handsome, mediocre prestige production. Begging forgiveness, it‚Äôs the film equivalent of a pretty bouquet tossed in the general direction of Turing‚Äôs columbarium, carrying a card reading ‚ÄúOops.‚Äù

The Imitation Game focuses on Turing‚Äôs time as head code-breaker at Bletchley Park during World War II; his work towards deciphering German naval transmissions helped reduce the length of the war by an estimated two years and saved millions of lives. Until it must hit the requisite darker notes, the film‚Äôs tone is politely bright and comic. Benedict Cumberbatch plays Turing as a holy, Father Brown¬≠‚Äìlike innocent‚Äîhe cleverly blusters his way into the Government Code and Cypher School position, yet he‚Äôs all thumbs with matters romantic, as shown in both flashbacks to an ultimately tragic schoolboy infatuation and his platonic courtship of and proposal to fellow Bletchley code-breaker Joan Clarke (Keira Knightley), who enjoys Turing‚Äôs mind. (Much fun is had with her examiners‚Äô bewilderment that a woman would be auditioning for this top-secret boy‚Äôs club.) The film‚Äôs choice of spinning him as a plucky go-getter paves the way for its starchy comic scenes rigged to earn polite audience chuckles, like his dueling with the glowering Commander Denniston (Charles Dance, similarly evil in Bleak House) and the twisty logic Turing uses to turn mundane discussions like what‚Äôs for lunch into protracted mind games. So that it doesn‚Äôt completely sidestep the issue of Turing‚Äôs unsnuggly severity there are also harsh moments, like him trying to ward off Joan by telling her, ‚ÄúI don‚Äôt care for you,‚Äù coldly firing his lessers, and boasting in voiceover, ‚ÄúGod didn‚Äôt win the war. We did.‚Äù

Despite these darker shades and the drab, afterthought of a detective subplot helmed by a thankless Rory Kinnear, The Imitation Game succeeds in simplifying the tedious and technical work of the code-breaking, sentimentalizing furtive wartime heroics, and making Turing‚Äôs abominable fate melodramatically palatable. Visualizing the mental grunt work of mathematics is a challenge, which is why Ron Howard (briefly attached to direct) focused on John Nash, Jr.‚Äôs paranoid schizophrenia, which is always ripe for juicy exploitation, in his overcooked and whitewashed A Beautiful Mind. As in Interstellar‚Äôs wormhole-explicating paper puncturing (another film where the very world/species is at stake), there are some enthusiastically rushed Cliff‚Äôs Notes of how this team used Turing‚Äôs improved ‚Äúbombe‚Äù methods to build on the abilities of the Polish Enigma machine. Mental exertion gets mixed up with flirting, as when Alan dashes to Joan‚Äôs dormitory at night and cutely throws pebbles at her window before the two gleefully pore over readouts by candlelight.

In his essay about anti-intellectualism in American movies, ‚ÄúThe Last Taboo,‚Äù Phillip Lopate bemoaned the 1994 comedy I.Q., in which ‚ÄúEinstein is made to repeat a half-dozen platitudes that assert the heart‚Äôs supremacy over the head . . . the great thinker must ritually offer his head to the audience‚Äôs anti-intellectual prejudices.‚Äù The British-American Imitation Game isn‚Äôt quite so crude, and its agenda‚Äîof helping return Turing‚Äôs reputation to its rightful high stature and shaking its head at historical discrimination‚Äîdoesn‚Äôt allow it to be (Einstein‚Äôs rep is pretty firm). But it is a determined crowd-pleaser, and so it makes sure to drag Turing‚Äôs abstract and potentially alienating genius down to a safer, graspable level, aided by the simple, creamy English charm of its humor and wide-eyed audience surrogates like young Peter Hilton (Matthew Beard), who fails to convince Turing to allow premature and potentially compromising use of the intel to save his brother‚Äôs life in an imminent, preventable attack.

The film benefits from the built-in excitement of the plot‚Äôs wartime intrigue. Norwegian director Morten Tyldum efficiently advances the drama with no-nonsense blocking and the respectable and attractive (but never interesting) photography of √ìscar Faura, which puts it one up on the ugly and similarly over-maudlin Brit-history prestige favorite The King‚Äôs Speech. Not shy with clich√©, Tyldum includes a classic: Turing was a serious long-distance runner, and during one of his exercise asides here, he suddenly stops, poignantly overwhelmed, the audience is to surmise, by his stressful and crucial position in the center of such high private and historical drama. Cumberbatch works in his reel-ready acting crescendos (‚ÄúThat man can act!‚Äù raved someone after my screening) and is brilliant in the film‚Äôs genuinely moving and heartbreaking coda, but he is restrained enough to leave room for clutch ensemble work from Matthew Goode as chess master and fellow math genius Conol Hugh O‚ÄôDonel Alexander and Mark Strong as the crafty MI6 head who supervises the Bletchley code-breakers following the demotion of no-fun Denniston that Turing helped finagle directly from Winston Churchill.

At the press junkets, Goode and Cumberbatch have emphasized how ‚Äúreally, very angry‚Äù they are about their country‚Äôs disgraceful treatment of Turing. But there is little palpable anger in this film of diverting thrills, adorable misunderstandings, and showcase performances. With the enlightened wisdom of hindsight it is able to safely condemn the mistakes of the past, and admirably ‚Äúraise awareness‚Äù of Turing‚Äôs feats and plight. More people will know the man‚Äôs name now, but The Imitation Game is no less hollow a gesture than the Queen‚Äôs tardy pardon.