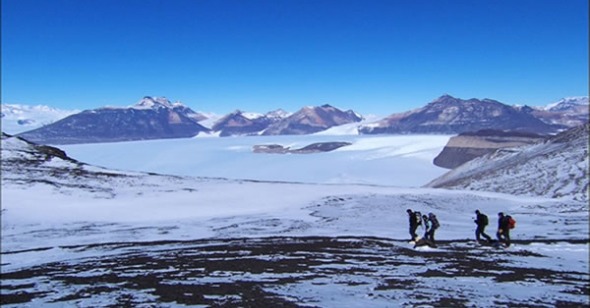 Propelled by the onset of tiny, non-invasive HD cameras, the nature documentary is enjoying a popular resurgence, resulting in the improbable hipness of films like March of the Penguins and stoner TV favorites like Blue Planet and Planet Earth. As society increasingly indulges its voyeuristic love affair with reality television, seemingly captivated by every banal moment in the lives of people of varying intelligence and sincerity, the popularity of the traditional nature film feels almost like pushback; the result of an equal and opposite desire to capture the world without human imprint. The Antarctic landscape feeds that desire perfectly—it’s an isolated, still-wild backdrop to only a few blubbery animals and even fewer people.

Images from the Antarctic have long been a source of fascination, from the photographs of Frank Hurley, who documented Ernest Shackleton’s voyage back in the early 1900s, to recent films such as Werner Herzog’s documentary Encounters at the End of the World and even Alien vs. Predator. Anne Aghion’s Ice People joins the ranks of docs set in the region, but focuses, as the title suggests, on the individuals living rather than the place itself, gently reminding us of the quotidian amidst the impossible splendor of the scenery—that there are average humans leading something approaching normal lives in this extreme environment. In a way, this is a return to the original subject of public interest in Antarctic expeditions: the exploits of the brave men and women who threw themselves into such hostile landscapes, and the narrative of the expedition itself. Now we consider such people scientists of various stripes, but back during the “Age of Heroic Exploration,” they were called adventurers.

Aghion turns her DV camera on a quartet of geologists searching for fossils of plant life that would suggest a formerly tropical Antarctica, but the goal is less important here than the painstaking portrait of their needle-in-a-haystack search. Rather than lazy landscape cinema or the ever-popular penguin porn Aghion follows the minutiae of the subjects’ day-to-day lives. Ice People is mostly comprised of close-ups of the scientists and their hands digging in the dry, frozen earth, effectively creating the sense that their tasks and days run together until time ceases to exist. Intercut with shots of the dig are interviews with the team members on subjects such as how long one goes without a shower in Antarctica, the relativity of cold, and other details of eating, sleeping, and working. Occasionally Aghion’s observational eye will stumble upon a naturally poignant moment: One young scientist holds a markedly strained phone conversation with her boyfriend back home, or an offhand discussion between diggers of the nature of “The Scientist” or what the evidence of climate change might mean for evolution vs. creationism. Unfortunately these contextual moments are all too rare, and their disconnection from one another leaves the film to rest solely on the work itself, which, even in the film’s brief running time, can’t quite carry an entire feature.

While Aghion does not fall back on fetishizing the landscape, Ice People still does right by the beautiful, barren backdrop when it needs to. Long shots of snowy mountains or miles of rock-strewn earth as desolate as any moonscape easily awe, and punctuate the filmmaker’s rigid structure by briefly reminding of the bigger picture. In the strange world that Ice People portrays, the intrusion of a helicopter into the wide, clear sky is as jarring and incredible as a spaceship landing in one’s backyard. The DV format serves the setting well in these long shots, flattening the depth of field into barely distinguishable layers of white and gray, giving the effect of one of Jasper Johns’ monochromes or the overlapping cardboard cuts of a puppet show set.

If the subject matter Anne Aghion captures in Ice People is inherently less dramatic than that of her previous documentaries (which focused on the Rwandan genocide), she at least takes a muted approach here that serves as a nice counterpoint to the zany personalities and grandiose narration of the similarly themed (or any) Herzog film. But Ice People still leaves the sense of having missed something. While her protagonists clearly feel exhilarated by unearthing a leaf-printed fossil from a hole in the ground, the film’s dogged march forward and general disinterest in prioritizing any individual moment leaves us out of their excitement. She captures the lovely, tedious rhythm of the work but makes little room for its underlying joy and spirit. Aghion’s achievement lies in zooming in on this largely ignored portion of Antarctica’s long exploratory timeline, but one wonders what might have happened had she refocused the lens one more time; she’s uncovered the minutiae in the grandeur, but hasn’t dug deep enough to uncover the grandeur within the minutae.