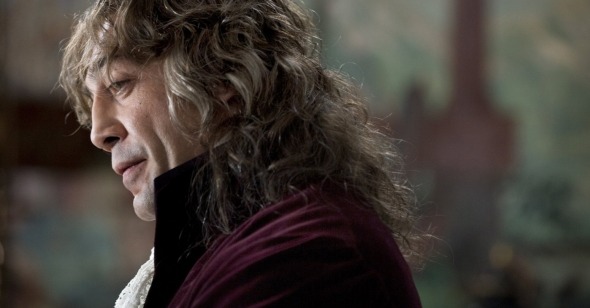 Goya‚Äôs Ghosts is half what one expects from Milos Forman. As in the director‚Äôs One Flew Over the Cuckoo‚Äôs Nest, Amadeus, The People vs. Larry Flynt, and Man on the Moon, its protagonist is a daring iconoclast who stands intrepid against the uncomprehending conventionalists of his time. But it significantly departs from those earlier films by making its hero more an observer than an instigator. In fact, the film travels a surprising route, moving from the controversial nature of Francisco Goya‚Äôs art to the repressive tactics of the Spanish Inquisition in its waning days in the late eighteenth century to the hypocrisy of the Napoleonic invasion and occupation of Spain. By film‚Äôs end, Goya is deaf, still able to paint the madness around him, yet impotent to help those who need him.

But whether the film benefits from placing Goya (Stellan Skarsg√¢rd) on the sidelines is hard to say. It‚Äôs certainly refreshing to see Forman, who wrote the film with legendary screenwriter and Bu√±uel partner-in-crime Jean-Claude Carri√®re, forgo his usual tendency of beating viewers over the head in order to convince them of the immaculate saintliness of his outsider heroes. The film‚Äôs most interesting character and real subject of study is instead Brother Lorenzo, Goya‚Äôs friend and Church opportunist. Javier Bardem plays this two-faced weasel with subtle cunning, purring his words with seductive gentleness as he uses them to lie and cover his ass. His cynical enforcement of Church doctrine indirectly leads to the arrest of In√®s (Natalie Portman), a Goya model falsely accused of practicing Jewish customs. In√®s‚Äôs father proves to Lorenzo that her confession means nothing by feeding him his own medicine, transforming a friendly dinner into a torture chamber in which the priest is ‚Äúput to the question‚Äù with rope and a chandelier serving as a pulley. Blackmailed into convincing the Church to free In√®s, Lorenzo fails to do so and is disgraced. Flash forward fifteen years later and he‚Äôs now a leader of the French Revolution, denouncing the holy men who ran him out of Spain and encouraging a new reign of terror under the banner of ‚ÄúLibert√©, Egalit√©, Fraternit√©.‚Äù

Unfortunately, things start getting a little silly and, in typical Forman fashion, more than a little overwrought when Goya‚Äôs Ghosts arrives at the Napoleonic War. A telegraphed allusion is made to the Iraq War when a French general promises his troops they will be greeted with ‚Äúflowers and kisses.‚Äù (Guess what? They aren‚Äôt.) Randy Quaid makes one appearance too many as an unfunny and non-satirical King Carlos IV. And just when you thought things couldn‚Äôt venture further from the story of Goya and his role as both the King‚Äôs official painter and the people‚Äôs macabre sketch artist, the film becomes a melodramatic family affair, with the newly liberated and half-mad In√®s trying, with assistance from Goya, to locate the young harlot Alicia, the daughter she conceived with Lorenzo (mainly so she can be restored sans broken jaw, greasy hair, and peeling skin, Portman also plays Alicia).

Lorenzo doesn‚Äôt want evidence of his past indiscretions to surface and so uses his power to get Alicia out of the country, which leads the film down a series of tedious twists and turns whose unimportance is conveyed through the hollow pomp of period costumes, unidentifiable accents, and a perfunctory visual palette. And yet, after all the nonsense, Forman sneaks in a final scene that conveys true weight: with the Spanish monarchy restored, a public execution becomes the stage on which Lorenzo and In√®s form a grotesque reunion that mocks the righteousness of political and religious fanaticism. It‚Äôs a haunting ending to an otherwise unremarkable film, all the more powerful for taking one completely unawares.