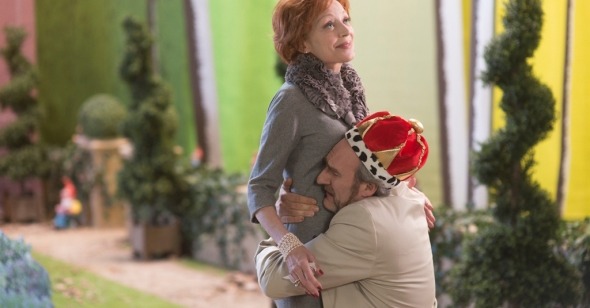 The Puppet Master
By Max Nelson

The current consensus on Alain Resnais‚Äôs graceful, humane, and ribald final film, Life of Riley, is that it‚Äôs something like an airy sonata from a director best known for large-scale symphonies. It‚Äôs certainly a delicate movie, filled with pockets of open space and set to an unhurried, loping rhythm. Yet there‚Äôs something deeply ambiguous about Life of Riley‚Äôs simplicity. It‚Äôs the radical sort of simplicity reminiscent of the late output of so many great artists: the elemental, pre-Socratic mysticism of Heidegger‚Äôs later essays, Fernando Pessoa‚Äôs sing-songy late quatrains, Bob Dylan‚Äôs expansive recent variations on American roots music. Like those works, Life of Riley finds fruitful variations on a fairly rigid traditional form‚Äîin this case, the romantic farce. And, also like them, it seems to have been conditioned, or prepared for, by its creator‚Äôs previous formal breakthroughs.

Resnais establishes the movie‚Äôs central dynamics quickly and efficiently. Across three patently artificial exterior sets, a trio of couples are starting to drift apart due to the operations of an absent seventh figure who, we soon learn, is dying. The world in which they move often feels unfinished or provisional: monologues are delivered behind cross-hatched, bande dessin√©e‚Äìstyle black-and-white backdrops resembling test screens or holding patterns; characters enter and leave each scene through painted curtains; scene changes are signaled by recurring entr‚Äôacte devices, most often a slow zoom onto a watercolor painting depicting the next section‚Äôs set. Under these circumstances, the characters‚Äô petty jealousies and sexual itches become the film‚Äôs real subject with remarkable speed. This is not new territory for Resnais‚Äîbut it is, if nothing else, difficult to square with the regal high-modernist austerity of the films for which he‚Äôs still best known.

By the end of the 1960s, he had made five features, films of immaculate precision, intellectual rigor, and somewhat chilly beauty. Then, as now, he was obsessed with the politics of romantic love. In Hiroshima mon amour and Last Year at Marienbad, he used the love affair as, variably, a subject for forensic investigation, an equation to be simplified, a theorem to be proven, and a problem to be solved. In 1968, Resnais followed up Muriel‚Äîfor which he had expanded the scope of his study to include a small constellation of lovers and ex-lovers‚Äîwith the time travel fable Je t‚Äôaime, je‚Äôtaime. In that film, the formalist trappings of Resnais‚Äôs early work‚Äîcomplex cross-cutting through space and time, a refusal to distinguish clearly between the objective and subjective, a spectral modern classical score by Krzysztof Penderecki‚Äîwere put in the service of what was, in effect, a traditional love story.

To say that Resnais moved from an essentially formalist outlook to an essentially humanist one is to say that, in his earliest films, his characters‚Äô emotional and intellectual lives were in some way support systems for the creation of a formal structure. But that certainly isn‚Äôt true of Hiroshima, one of cinema‚Äôs most devastating reflections on the effect of war on the lives of individuals‚Äîand it is not much truer, it seems to me, even of the chillier, less welcoming Muriel. Instead, if there‚Äôs a deep difference between Je t‚Äôaime, je t‚Äôaime and, say, Hiroshima mon amour, it‚Äôs that there‚Äôs something about the radical interiority of Hiroshima‚Äîor, for that matter, the radical abstraction of Marienbad‚Äîthat makes it difficult to distinguish the mental space of its characters from the physical space of the world in which they‚Äôre alleged to live. In his middle and later period films, Resnais started to work more often by creating rigidly bounded, habitable environments, then populating them with people‚Äîa method he‚Äôs relied on particularly heavily in his recent collaborations with the British playwright Alan Ayckbourn.

Resnais met Ayckbourn in the late Eighties on one of his regular trips to the playwright‚Äôs theater in Scarborough, North Yorkshire, where the filmmaker and his partner Sabine Az√©ma had been vacationing for years. The couple married there in 1997, long after Az√©ma had starred in Resnais‚Äôs first, bifurcated Ayckbourn adaptation, 1993‚Äôs Smoking/No Smoking. His second, 2006‚Äôs Private Fears in Public Places, has certain elements in common with Riley, which was adapted from Ayckbourn‚Äôs play Relatively Speaking: a cast of six principal characters shuffled into different pairings and groups scene-by-scene; storybook-style transitions, here in the form of brief buffer shots of falling snow; a tone of worldly, serene tolerance; an attitude of muted tenderness toward the sexual foibles of characters approaching or leaving middle age.

Even by the time of Private Fears, Resnais still gravitated to the role of the grand designer, placing his characters in a providential network of chance meetings and surveying the resulting picture with godlike omniscience. (‚ÄúHis work,‚Äù he once said a little chillingly of Ayckbourn‚Äôs plays, ‚Äúis like a spider's web when the spider has gone away and the insects start to move.‚Äù) At the same time he had grown more pragmatic, and more closely attuned to the rhythms of daily urban life. He seemed, above all, more willing than ever to give select moments‚Äîin particular, a beatifically lit kitchen-table conversation between Az√©ma and the son of an old man for which she‚Äôs caring‚Äîthe sense of epiphany.

In Riley, Az√©ma plays an actress prone to flamboyant gestures‚Äîa role perhaps better suited to her grandstanding, sometimes grating comic presence than that of the sweet, deeply religious dominatrix she played in Private Fears. She, Kathryn, is married to Colin (Hippolyte Girardot), a doctor who lets slip in the movie‚Äôs opening minutes that George Riley, a patient of his and friend of theirs, is terminally ill. Kathryn‚Äôs two married best friends, with whom she‚Äôs currently putting on a play we never see, are devastated for different reasons: Jack (Michel Vuillermoz) was George‚Äôs best friend, Tamara (Caroline Silhol) one of his many romantic interests. Filling out the picture are Sandrine Kiberlain as Jack‚Äôs ex-wife and Andr√© Dussollier as her doting current partner, a much older farmer whom the movie sets up, possibly deceptively, as something of a patsy. The film‚Äôs great gambit is that George himself, who generates practically all the movie‚Äôs conflict by secretly inviting all three women to accompany him on his final trip abroad, never appears onscreen.

An obvious way to read all this would be to say that George is, in fact, Resnais, who has been playing the part of an absent spider and casting his characters as flies in his web since at least Marienbad. By extension, it‚Äôs tempting to think of George‚Äôs wake, with which the movie ends, as a stand-in for Resnais‚Äôs own. But what could this mean? Is Resnais imagining what people would say at his funeral‚Äîwhat the world would look like without him? Is he reflecting on every film‚Äôs need for a web of order, and a spider to spin that web? On that note: how can a filmmaker go about killing himself off in the space of his own film?

It‚Äôs unclear, of course, whether these are the right questions to ask. The film‚Äôs perspective is far from that of the Don Juanish George, who would, one senses, cringe at the movie‚Äôs soft wistfulness. Occasionally, we watch the camera drift down an empty country road or city street, impeccably smooth in its movements and elevated high above the ground as if borne up on a current of air‚Äîand it‚Äôs these disembodied interludes that might best be said to represent the movie‚Äôs perspective. There‚Äôs something at once curious and bloodless about Life of Riley, from the willingness with which it eschews natural settings in favor of artificial backdrops to the attitude it maintains toward its characters‚Äîtreating their breakdowns, squabbles, and reconciliations with deep interest and genuine sympathy, but also with a degree of placid detachment.

One of the great pleasures of Life of Riley is the underplayed skill with which it wriggles out of its own self-imposed formal constraints. It‚Äôs only late in the film that Resnais introduces a new interior set, then another, then a third. Then, in its last shot, we meet a seventh character. Colin and Kathryn‚Äôs beautiful teenage daughter, who comes to the old seducer‚Äôs funeral, is the film‚Äôs trump card; her serene indifference to the event is a kind of mirror image to the equally serene god‚Äôs-eye perspective with which the movie treats its heroes. As a whole, the film speaks in an Epicurean language of the need for stability, leisure, and compromise. (Its French title translates to Love, Drink, and Sing, and ‚ÄúLife of Riley‚Äù was originally a colloquial English phrase for the life of the wise, judicious freeloader.) The couple‚Äôs daughter, on the other hand, speaks the unflappably confident language of a person just starting to live. To say that the movie lacks the terms to interpret this language is only to say that it‚Äôs a film made in the spirit of old age rather than that of youth‚Äîbut few swan songs cede the floor to a younger generation this graciously, or with such mischievous parting words.