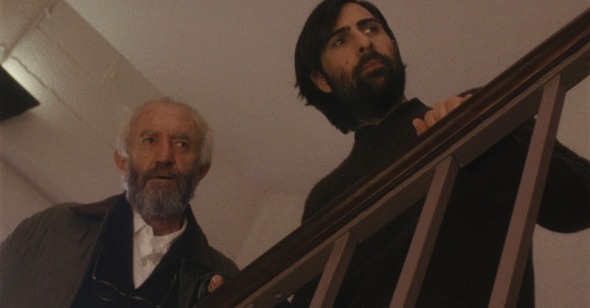 A Bitter Tomorrow
By Danny King

Writer-director Alex Ross Perry (Impolex, The Color Wheel) spends the opening, pre-title-card minutes of Listen Up Philip sketching the repugnant behavior that his protagonist, Brooklyn-based author Philip Lewis Friedman (Jason Schwartzman), has made his stock-in-trade. In the first dialogue scene, Philip‚ÄĒwhose second novel, Obidant, is on the verge of publication‚ÄĒ meets an ex-girlfriend, Mona (Samantha Jacober), for lunch, but the get-together quickly turns into an opportunity for him to scold her. He launches into a tirade about their botched relationship, and how Mona‚Äôs presence held him back; were they still together, there‚Äôs no way he‚Äôd be where he is today, he claims. In the second dialogue scene, Philip meets his former college roommate, Parker (Steven Boyer), for a beer, and criticizes him (as he did Mona) for what he sees as Parker‚Äôs personal failings. Following these beat-downs, Philip returns home to his photographer girlfriend, Ashley (Elisabeth Moss), and tells her about them. In a wonderful throwaway line, Ashley teasingly deems Philip‚Äôs aggression ‚Äúpretty hot‚ÄĚ‚ÄĒa clear indication that, at this juncture, she is completely unaware of her boyfriend‚Äôs true capacity for cruelty.

What Philip doesn‚Äôt understand‚ÄĒand what he probably still doesn‚Äôt understand 108 minutes later, when Listen Up Philip ends‚ÄĒis that, after he triumphantly storms out of situations like these, the objects of his derision (whether it be Mona, Parker, or anyone else) will lick their wounds and go on with their lives. This leaves Philip on the outside, thinking he‚Äôs above it all, when he‚Äôs really the most pathetic character in his own life story. But this realization only slowly dawns on the viewer; for a while, Perry and Schwartzman do a convincing job of dramatizing the nasty appeal of this kind of take-no-prisoners lifestyle. After posing for photographs for the new book, Philip is approached by a worker at the shoot, Emily (Starlet‚Äôs Dree Hemingway), and ends up asking her out. Over drinks, Philip unearths his secret agenda: Emily had rebuffed Philip‚Äôs advances back when he was in the midst of publishing his first novel, and Philip has only met with her to return the favor. ‚ÄúI‚Äôll call you,‚ÄĚ he lies, undoing his tie, as he leaves Emily on the sidewalk. It‚Äôs clear that he gets a high from such taunts.

Even better than such petty victories is the fact that Philip‚Äôs brutal narcissism makes him an ideal prot√©g√© for a hero of his: the towering, reclusive author Ike Zimmerman (a tremendous Jonathan Pryce). Impressed by Obidant, Zimmerman suggests a meeting with Philip purely on mentor-subject terms, but the two are such mirror images of each other that they fast become friends. Zimmerman invites Philip to his country house, where the lack of city noise and combustion makes for a more productive creative environment. Much to Ashley‚Äôs chagrin, Philip accepts‚ÄĒand, to make matters even worse for his relationship, his stay in the country is vastly extended after he accepts an adjunct creative-writing position at Lambert College. Philip has it all‚ÄĒa steady income, a quiet place to write, the constant company of a mammoth literary figure‚ÄĒwhile Ashley is left wondering how Philip could walk away from a nearly three-year relationship in the blink of an eye.

The obvious risk of a whip-smart acidic comedy like Listen Up Philip is its potential for glorifying the narcissism of its male creative characters. The breakneck speed of the movie‚ÄĒfast, conversation-focused editing by Robert Greene; huge, brisk chunks of third-person narration spoken by Eric Bogosian‚ÄĒforces us to keep up with Philip‚Äôs darting consciousness, and initially we respect him for the tempo at which his mind moves and even for the rude, cutting remarks that fly out of his mouth. This is well exemplified when Philip first visits Lambert, voicing to Zimmerman his contempt for the polite social decorum of the academic personalities in the room. ‚ÄúThey just want to be your friend,‚ÄĚ Zimmerman mockingly replies. A woman then approaches them and asks, ‚ÄúIs there a trash in here?‚ÄĚ ‚ÄúYes, I‚Äôm right here,‚ÄĚ Philip responds, much to Zimmerman‚Äôs delight. For Zimmerman and Philip, this room and the people in it are beneath them. For the viewer, it‚Äôs simply a riot to see Pryce‚ÄĒwho appears so invigorated here to be playing a role of significant stature after what seems like years of dismissible projects‚ÄĒspitting up his red wine like a stupid, drunk teenager.

About thirty or forty minutes in, though, the gloves come off and Perry gets to work cutting these men down to size. Leaving Philip off-screen for a notable amount of time (a gambit Perry has claimed was inspired by William Gaddis‚Äôs decision to make his protagonist disappear for long passages in The Recognitions), Perry devotes an entire sequence and a bulk of narration to Ashley. Still reeling from her separation with Philip, Ashley finds herself in a lonely rut, unable to move forward. At one point, she remembers sitting with Philip in a bar, where their charming conversation is interrupted by his random, unnecessarily harsh confrontation (‚ÄúGo fuck yourself‚Ä¶Get the fuck out of here right now‚ÄĚ) with another patron. Philip is kept off-screen as he rants, with the head-on camera focusing on Ashley, aligning us with her point of view; when the memory ends, the movie cuts back to Ashley‚Äôs face in present-day reality. Here, as in the rest of the Ashley-centered sequence, Perry and DP Sean Price Williams‚ÄĒshooting handheld on cozy, warmly lit, nostalgically grainy 16mm‚ÄĒread Ashley‚Äôs face as a shaken postwar zone, reflecting the destruction Philip has left in his wake. The movie‚Äôs most astonishing image might be the forty-second close-up on Ashley that occurs after she refuses Philip‚Äôs first request to move back into their apartment. Moss‚Äôs face projects a remarkable range of emotions here: sorrow, loneliness, giddiness, anger, fear.

Perry then fleshes out Zimmerman in a comparably substantial manner, putting his long-running track record of isolation and hostility under the microscope. Instead of merely continuing to ignore the daughter (Krysten Ritter) who lives with him at the retreat, he takes to actively berating her, casually dropping words and phrases like ‚Äúbitch‚ÄĚ and ‚Äúpain in the ass‚ÄĚ in her direction. He starts sucking down 25-year-old Laphroaig like a fish, and, in one disastrously uncomfortable scene‚ÄĒwhich critic Ignatiy Vishnevetsky has rightly compared to John Cassavetes‚Äôs Husbands‚ÄĒhe tries to score a couple of younger women for himself and his aging writer pal. When one of the ladies asks if anybody else will be showing up to the party, Zimmerman calls Philip to demand his company, and the desperation in his voice‚ÄĒhis crippling fear that Philip might be busy or unable to show up‚ÄĒfurther reveals his emotional immaturity. (Let it not go unnoticed that the title of Zimmerman‚Äôs breakthrough novel is nothing less than Madness & Women.) If Zimmerman‚Äôs weakness here is so naked that it encourages a whisper of empathy, his behavior elsewhere (cursing at his daughter, speaking proudly of a record of burning bridges) justly cements him as a poisonous person.

Considering that Perry identifies as a hardcore cinephile, his style is surprisingly performance-driven: his work prioritizes dialogue and the close-up. This isn‚Äôt to say his movies, with their staunch commitment to celluloid, aren‚Äôt beautiful to look at, but that his voice comes through via the accumulation of emotion rather than visual flourish. In the case of Listen Up Philip, he also shows his absolutely dead-on instinct about what to leave off-screen. Philip, for instance, like Maurice Pialat‚Äôs We Won‚Äôt Grow Old Together (1972)‚ÄĒanother film about an artist (a film director, in this case) and his destructive relationships‚ÄĒconveys no actual interest in its protagonist‚Äôs artistic process. Unlike Zimmerman, who through his old age and his list of notable achievements still manages to emit a writerly aura, there is no mystique or romance to Philip and his writing process.

Listen Up Philip can at least partly be looked at as autobiography: the bearded, fast-talking, thirty-year-old Perry certainly resembles the bearded, fast-talking, thirty-something Philip. Additionally, Perry has singled out a subplot involving a rival writer of Philip‚Äôs (played by Keith Poulson) as based on personal experience. But the problems the film is working through are more expansive than this would suggest, a fact that is aided by Perry‚Äôs purposeful use of narration. Kane, the last name of the Ashley character, seems notable here‚ÄĒin another life, Orson Welles would have made a killer Ike Zimmerman, and he might have even narrated the thing himself. But unlike the rich timbres of Welles‚Äôs narration in The Magnificent Ambersons, Bogosian‚Äôs voice is objective and removed‚ÄĒhe doesn‚Äôt judge or accentuate, but states things flatly and factually. Nevertheless, his lack of emoting does little to keep Listen Up Philip‚Äôs narration-heavy closing passages from registering as tragic. In Moss‚Äôs final scene, Ashley is seen content and poised, and she refuses to let Philip into her house, leaving him on the streets of New York with a box and nowhere to stay. In this moment, Philip has finally gotten his ‚Äúcomeuppance,‚ÄĚ to borrow a word from Welles‚Äôs Ambersons narration. Perry‚Äôs camera then fixes on Schwartzman as Bogosian flashes through years and decades, distilling Philip‚Äôs future‚ÄĒwhich sounds a lot like Zimmerman‚Äôs (a mix of wealth, acclaim, and loneliness)‚ÄĒinto a couple of terse sentences. We might as well be watching the character‚Äôs death.