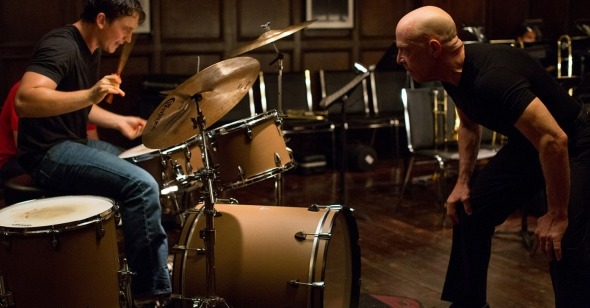 There is a long tradition of films about artists driven to madness by their own stifling passion while under the duress of a controlling mentor. The teacher—or choreographer, or coach, or parent—sees some talent in the pupil that can only be extracted through force and proceeds to push this sensitive soul into oblivion while the other dancers—or singers, or trombonists, or sculptors—survive this treatment, protected by their own mediocrity. In films that focus on musicians this usually means an emotional or mental break, such as the 1996 Geoffrey Rush breakthrough Shine. It is unusual for these films to generate worry about the physical well being of a musician (unless of course that musician happens to have a heroine problem, à la Charlie Parker in Bird). This style of self-destruction is generally reserved for dancers going mad, in films like The Red Shoes or Black Swan, which hail from an even longer tradition of grotesque fairytales about victims destined to dance until they die.

In Whiplash, Damien Chazelle (Guy and Madeleine on a Park Bench) has so effectively represented the intense physicality of being a musician that watching it one might wonder if a drummer could actually play himself to death. The film is a nauseating pas de deux between Andrew (Miles Teller), an up-and-coming jazz drummer at a prestigious New York City music academy, and Terence Fletcher (JK Simmons), the sadistic conductor who takes an interest in him. Mr. Fletcher’s tough-love teaching methods are apparently tolerated at the academy because they yield results. Fame and success follow his pupils, and to be invited into his ensemble is to have a real shot at a notoriously difficult industry, which means his students are all too willing to accept the abuse.

Soon after Andrew joins, however, it is clear that he is out of his depth, bewildered by Fletcher’s violently shifting moods, thrown off his game by the constant tension. On the other hand both fearing and desiring the approval of this tyrant does make him a better musician, but at what cost? As with Black Swan or even documentaries like Frederick Wiseman’s La danse, which show the cracked bones and bloody slippers that belie the elegance of ballet, Whiplash shatters the cool, effortless exterior of jazz musicians. Andrew callously breaks up with his girlfriend, drags his mattress into his practice room, and plays the drums until he literally bleeds, the camera work of cinematographer Sharone Meir lingering on the drumsticks grating against his scabbed fingers, the cloud of blood filling a pitcher of ice water he dips his hands into between sets, the tiny pearls of blood shimmering on a high hat during a terrifying double time swing that seems like it can only end in aneurysm. All the while Fletcher wages emotional warfare against his exhausted students, with a special focus on Andrew.

Andrew and Mr. Fletcher are given practically no back story, which keeps the narrative as bound to the immediate present as the camera, which is usually tight enough on our protagonists to see the sweat beading on a tense brow. It is a refreshing choice, particularly in the case of Fletcher, as it would have been all too easy to explain away his behavior with some sad tale of personal loss. Chazelle revealed during a New York Film Festival press conference that at one point they had shot some scenes suggesting that Fletcher once had a wife and child who were tragically ripped from him. Thankfully, this totally unnecessary flourish was left out; indications of Fletcher’s capacity to feel are reduced to smaller, subtler gestures, such as the atypically sweet exchange he has with a friend’s young daughter, or the tears he sheds over the death of a former student. The fact that this asshole has had some major disappointment in his life is clear, but, because of the extremity of his actions, irrelevant, and guessing at the motivations for said actions—is it truly in pursuit of greatness? Or more insidious than that?—is far more satisfying than having a pat, prefabricated explanation.

The rest of the cast members are little more than signposts on Andrew’s potential road to glory, there to nudge the plot forward or illuminate some small facet of his character. There are the band members that share his abuse, the family friends whose tepid praise of Andrew’s accomplishments show how misunderstood he feels by the outside world, the father (Paul Reiser) who struggles to support a son whose ambition and talent far surpasses his own. This treatment creates a story that is a little myopic in a way; it is a series of volleys taking place over little more than a year, and without any significant character development (unless “going nuts” counts). But without that tight focus, without forcing the viewer so constantly into Andrew and Fletcher’s unpredictable, jittery arena, Chazelle would not have been able to effect such an acute, overwhelming sense of anxiety.

The one character misstep is Andrew’s insipid love interest, Nicole (played by Glee’s Melissa Benoist), who works concessions at the movie theater he frequents with his father on rare nights off. Nicole is a total throwaway in the mold of Rooney Mara’s irritating stock role in The Social Network; a blankly pretty, totally unambitious chick who serves to highlight the protagonist’s drive and ambition by comparison. Although us rubes are clearly meant to identify with characters like this one, the gender politics of the cliché exchange makes her inclusion fairly insulting. And although the purpose of having Nicole in the film is to see Andrew’s awkward tender side, the girl is dispensed with so quickly that there is never an opportunity to invest emotionally in their relationship. Andrew’s capacity for feeling beyond his music is far better represented by his relationship with his father, which, while limited, is clearly full of deep affection.

Critics and audiences alike have been hot and bothered over Miles Teller since his seemingly effortless work in The Spectacular Now. His performance in Whiplash is noteworthy, requiring more diversity and intensity than that star-making turn, which often relied on his natural charm. Teller conveys that tensed, animal plasticity drummers have during play, a mounting sense of rage, and his puppyish looks handle “wounded” like nobody’s business. (Heightening the uncomfortable humor that accompanies Fletcher, after doling out a healthy dose of verbal abuse, mockingly asking Andrew if he’s “gonna be the single-tear guy.”) It is JK Simmons, however, who truly stands out. The tone and delivery of his part do not call for much subtlety, but there is a way in which, beyond the volume of his voice and the delivery of the dialogue, his whole body seems in tune to the film’s rhythm. His movement is staccato, musical, alternately calmed to a kinetic buzz, or worked up to feral spasm along with the drumbeat. His is a fearfully compelling performance that makes it all too clear why, beyond the promise of greatness, this anti–Mr. Hollanddraws his students in even as he spits in their faces.