I Served the King of England 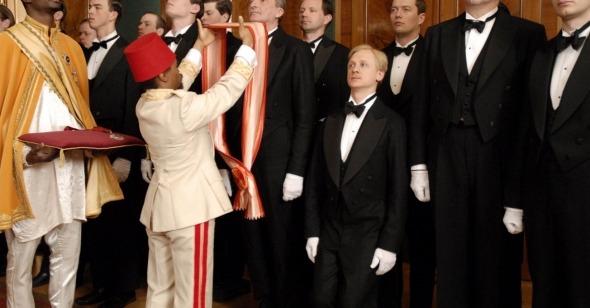 For the last decade American movie audiences have been bludgeoned so mercilessly with poorly and vacuously executed whimsy (“We’re drowning in quirk,” Michael Hirschorn famously wrote in the September 2007 issue of Atlantic Monthly, and I wholeheartedly agree) that an even partially successful excursion into magical realism like Czech New Waver Jiri Menzel’s I Served the King of England comes as nearly a relief, a rare contemporary example of how fanciful, wide-eyed filmmaking can be employed not simply for the sake of ironic condescension or set design window-dressing but for genuine emotional and political exploration.

I Served the King of England is based on Bohumil Hrabal’s short but epic novel of the same name, in which a diminutive Candide-like simpleton named Díte (Czech for “child”) follows his dream of becoming a millionaire and hobnobbing with the rich and powerful by rising from frankfurter vendor in pre-invasion Czechoslovakia, to hotel owner just after the fall of the Third Reich, and then finally to released prisoner from the Communist regime. Menzel has us see through the eyes of waiter and then maitre d’ Díte (played as an eager, taciturn young man by Ivan Barnev; as a wiser older man by Oldrich Kaiser) as he gawks at the swells, through beer glasses that enlarge the figures of their trophy women and in dreamlike sequences of decadent splendor where industrialists gallivant in sped-up motion and overlit interiors, devouring champagne and oysters while bedding willing young females. Such fancy abounds in “England”—stylized ornate period detail, silent movie homages, fantastic touches like halos appearing above heads and dollar bills floating in the air.

Díte’s romanticization of wealth (he’s impressed that the revelers he serves, who use their money to act like children, are the same ones selling the concept that “Work is ennobling”) bears a direct correlation to his understanding of women, with whom he first becomes acquainted as prostitutes, none more than literal playthings for him to decorate in flowers and food (though one questions whether Menzel seems to take equally titillating delight in these displays). When Hitler invades Czechoslovakia, Díte’s unthinking conformity to the ruler’s ideology coincides with his marriage to Líza (Julia Jentsch), a führer-adoring Aryan obsessed with conceiving the next “emperor of New Europe.”

The film’s transformation into an investigation of Czech shame (which comes in the form of Díte’s extremely slowly dawning realization that all is not right under the Reich) is effectively accomplished through what might have been elsewhere miscalculated whimsy—for instance, a hotel-turned-breeding ground for pure Aryan blood, consisting of Teutonic beauties frolicking naked in pools, becomes through a series of dissolves a recovery spa for limbless soldiers. But Menzel, England’s sole credited screenwriter, also does some injustice to Hrabal, a disappointment considering his heralded 1966 adaptation of the author’s Closely Watched Trains. Whereas Hrabal’s prose is thoroughly linear, Menzel unspools Dite’s tale by means of a framing device, and the gradual descent in the novel from fairy tale lark into cracking delusion gets softened in the film by Kaiser’s weak intermittent post-prison ruminations, spurred by the appearance at his now humble lodgings out in the woods by a young redhead (Zuzana Fialová). This vivacious young woman—representing the older Díte’s surviving hope, as embodied in his resilient infatuation with the opposite sex—takes the place of some darker elements from the novel, such as Díte and Líza’s child, an idiot who symbolizes the unholy, unfruitful product of the Czech collaboration with German nationalists.

Yet despite all its problems and compromises, England still points toward interesting possibilities in combining exaggerated folklore (what we might call in America the Paul Bunyanesque) with historical inquiry (Díte could be the optimistic flipside of Berlin Alexanderplatz’s Franz Biberkopf). At the very least, compared to a similarly whimsical outing like Liev Schreiber’s version of Everything Is Illuminated, a typical post-Wes Anderson film whose self-conscious style completely drowns the thematic coherence of its story, Menzel’s version of Hrabal’s novel wittily and critically examines its historical subject—the infantile tendencies that motivate compliance with totalitarianism —and once in a while evokes the wonder other likeminded films completely overshoot.