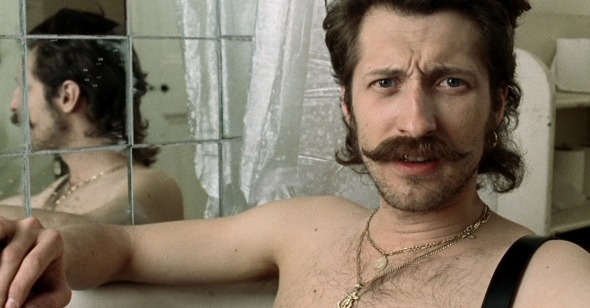 The filmmaker of Filth and Wisdom has a lot to say. She‚Äôs got big ideas and some clever ones too, and she‚Äôs letting it fly. She‚Äôs repulsed and fascinated by hypocrisy in the world, and wants people to just get over themselves, to abandon fear, pride, and learn to fly their freak flag high. She found this cool new band and its awesome-looking Ukrainian lead singer, and made a film all about him and his friends making it in the big city.

As it happens, this first-time filmmaker is no precocious teen. She is 50 years old, her name is Madonna, and she is the most famous woman on the planet.

Considering that everything she does is subject to tabloid scrutiny, I can‚Äôt help but respect the courage it took for Madonna to make, and then show to the public, a film as honest, unpolished, and staggeringly na√Øve as Filth and Wisdom. In every respect the work of an amateur, this is I‚Äôll figure-it-out-as-I-go filmmaking, by turns exciting, tedious, disarming, and god-awful. By all accounts, Madonna approached Filth and Wisdom with appropriate degrees of humility, wonder, and experimentation‚Äîalbeit with an actual budget and accomplished associates‚Äîand for all I know she‚Äôs now set to make a mature film. But unlike the school kid or backyard Spielberg, her flawed first try is coming to a theater or VOD box near you. Somehow I think she‚Äôll persevere. And, unlike the vulnerable greenhorn she resembles here, she‚Äôll remain unscathed by reviews such as this one.

Making its intentions immediately plain, the film opens with a direct-address monologue by its protagonist. Eugene Hutz, called here A.K. but essentially playing a heightened version of his already heightened self (the charismatic leader of gypsy-rock band Gogol Bordello, which is also the name of A.K.‚Äôs band), stares into the camera and boils it down. ‚ÄúFilth and wisdom,‚Äù he says, as straight-faced as a man with a twisty riverboat gambler mustache can be. ‚ÄúThey are two sides of the same coin.‚Äù Commence fortune-cookie philosophy as hard-knock worldview.

To pay the rent on their London flat, three roomies turn to the seedy side of life. A rock musician (Hutz) works as a cross-dressing S&M dominator (providing us with a fashion show‚Äôs worth of site gags: tall Ukrainian man in a wig and skirt, tall Ukrainian man in leather straps, vacuuming); a porcelain blonde ballerina (Holly Weston) concedes to pole dancing (trained, of course, by a been-around-the-block brunette); and a petulant idealist (This Is England‚Äôs Vicky McLure) works for a leering, racist pharmacist. La Vie Boheme! They find much filth, but hardly the sort‚Äîdeviant businessmen, parasitic strip-club owners, lonely fetishists‚Äîthat would shock anyone save for those still outraged by Madonna‚Äôs ‚ÄúOpen Your Heart‚Äù video. As for wisdom, they learn to accept their bad selves and follow their dreams, or something like that.

The most intriguing aspect of Filth and Wisdom is how Madonna connects to these new bohemians (same as the old bohemians) through a lo-fi visual style culled from the downtown New York of her own early 1980s youth. Single exposed bulbs light sparse apartment interiors, the camera shoots from low angles or in flat medium close-ups, and voices echo into distant microphones, aping the likes of Richard Kern, Nick Zedd, Jim Jarmusch, and Calvin Klein. As slapdash pseudo-musical, it also evokes punk hybrids of the period like Rock ‚Äòn‚Äô Roll High School and Rude Boy. The film features a few passable and infectious music video standalones, though Hutz‚Äôs self-satisfied mugging nearly ruins the party (like Madonna, his commitment to this material is both admirable and ghastly). She also busily cuts away from shots and scenes before they can take hold, too eagerly answering supposed ‚Äúfilth‚Äù shots with ‚Äúwisdom‚Äù ones, and vice versa. Archly hinting at self-awareness, a schoolgirl striptease to Britney Spears‚Äôs ‚Äú . . . Baby One More Time,‚Äù is abruptly abandoned for a shot of Richard E. Grant weeping in an armchair.

Like a ghost of bohemian past, Grant plays A.K.‚Äôs blind neighbor, Professor Flynn. Depressed and regressively blind, he broods alone in his dark apartment, perking up only when A.K. lets him cop a quick feel. Bizarrely shouldering the ‚Äúwisdom‚Äù side of the equation, he gives it all he‚Äôs got, like Laurence Olivier morosely chewing scenery in Neil Diamond‚Äôs The Jazz Singer. Hair shocked and talcum-powdered white, he listens to opera, fondles flowers and deep-sniffs books, then convulses orgasmically before crashing to the floor, a book covering his tear-stained face. Madonna crosscuts with Hutz at ironing, long legs stuffed into flesh colored pantyhose and pearls hung against his hairy chest. ‚ÄúIt‚Äôs true,‚Äù he says in voice-over. ‚ÄúThere‚Äôs duality in everything.‚Äù

No argument there. For example, some might see an embarrassing, inept film made by a shameless and clueless celebrity, while others see an instant camp classic from the vogueing queen of camp. As J. Hoberman famously wrote: ‚ÄúA supremely bad movie‚Äîan anti-masterpiece‚Äîprojects a stupidity as awesome as genius.‚Äù