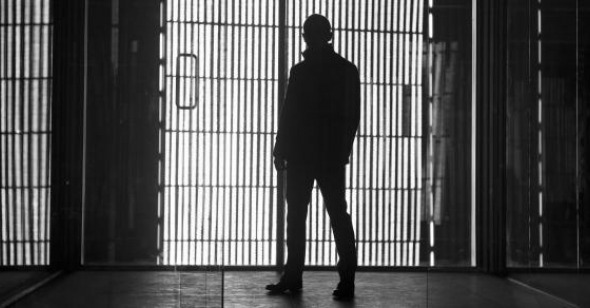 The sky really must be falling if Armond White and the New York Times agree on a movie produced in 2012. The consensus forming around Skyfall is that it‚Äôs an all-timer as far as the Bond franchise is concerned, and also the superior pop movie of the year; both positions are easily supportable. The delight of Sam Mendes‚Äôs movie (what an odd way to begin a sentence!) is its indulgence in a kind of shameless showmanship that‚Äôs quite distinct from the all-out sensory assault practiced by so many contemporary action movies: it saves its money shots for when they‚Äôre actually going to be worth something.

Take for example the entrance of villain Silva (Javier Bardem). Little more than a vicious rumor for the film‚Äôs first hour, he‚Äôs heralded by a languorously descending elevator and then allowed to slowly come into focus‚ÄĒfor a captive Bond and the audience both‚ÄĒas he makes his move from the background and into the foreground of a single, elongated rack-focus take. It‚Äôs an instantly iconic introduction with the stylistic heft of a set piece even though there isn‚Äôt a single shot fired, and if the ensuing interplay between the two actors is more cozy than creepy, that‚Äôs okay: having suffered mightily through the dour paces of Quantum of Solace, Daniel Craig looks chuffed to be dueling with such a game rival (Bond‚Äôs reply to the apparently ambisexual Silva‚Äôs desirous come-on is an example of a so-so line of dialogue being given some absolutely wicked topspin).

Bardem‚Äôs performance might eventually spin off into camp, but I‚Äôd argue that the moviemakers must be aware of this. Silva‚Äôs reveal of his hidden deformity is so flamboyant that it‚Äôs hard to take it too seriously, yet harder still to resist this nod to series continuity (most great Bond foils have some sort of physical handicap or oddity). At times, Skyfall strains to have it both ways‚ÄĒto operate in the sort of glumly realistic register made industry-standard by Christopher Nolan while toting up a score of Fleming-centric in-jokes and allusions‚ÄĒbut if the tone wavers the film still feels largely under control because of the superb rapport between Mendes and his cinematographer Roger Deakins.

Each movement of Skyfall has its own distinct set of textures and color values (something that Nolan tried to achieve in Inception), which can then be mapped across the whole of the film. The progression from neutral or grayed-out colors in the scenes set in England to more florid shades abroad (in Shanghai and Macau) mirrors Bond‚Äôs own on-the-job rejuvenation, while the visual dynamics of the climax are fairly remarkable, featuring foggy dusk-scapes that catch fire‚ÄĒall the better to illuminate the skulking silhouettes brandishing assault weapons. My point is not (merely) that Skyfall looks terrific, but that so much of its narrative and thematic thrust is bound up in that external packaging that attempting to reach down into the story‚Äôs core feels like it may be beside the point. ‚ÄĒAN

It doesn‚Äôt take much for us Brits to get excited about Bond, no matter what's gone before‚ÄĒusually only a Binder-esque title sequence and a few Barry-ish chords (courtesy of Adele this time). And Skyfall has the kind of joyous sense of occasion you‚Äôd expect from a franchise fully aware that everything stopped making sense decades ago. At one point Bond shows us a car (the Aston Martin DB5 from Goldfinger) he's apparently kept in a lockup for 48 years, which must make him about eighty, and which might explain why he‚Äôs so washed up he fails the requisite MI6 tests (despite only getting his license to kill two films ago). Is the script based on an original idea by M. C. Escher?

I love a bit of fantasy as much as the next man (actually, I probably don‚Äôt), and you're right, Adam, it's pointless to reach down into the story‚Äôs core when it‚Äôs about stimulus delivery. But tonality is crucial to that delivery, and if the makers of this Bond of Bonds are going to jettison any pretense at narrative context or series arc, why do we get scenes of Bond haring down a car-jammed Whitehall while Judi Dench reads Tennyson and po-facedly informs us that in these days of cyber-terrorism ‚Äúfrom the shadows,‚ÄĚ spies are more valuable than ever? And for a script with so many out-and-out gags and winking call backs to previous films (I counted eight but am reliably informed there are more than twenty), Craig is surely the grumpiest Bond since Sean Connery hauled his ageing carcass around the set of Never Say Never Again for a percentage.

Furthermore, why is James disposing of women like cigarette ash again? When he fell in love with Vesper and had some balls (however much punishment they took) in Casino Royale, he brought female audiences back to the franchise. Now, his apparent concern for a young lady from the Macau sex trade neither prevents him from jumping her in the shower nor extends to his lifting a finger to save her? Even in the bad old days, he was better than that.

Roger Deakins does his level best to join the 2012 celebrations, but the London sequences reminded me there‚Äôs a reason Bond films are usually set in places like Macau or Nassau. Bond on the tube? Bond chasing a bobby car past some road works? By contrast, when Deakins gets his hands on Glencoe, he renders the majesty of that particular landscape with a taste for the sublime, a welcome innovation for a franchise that could never previously be bothered.

And thank goodness for Javier. We're in complete agreement about that introduction. Camp? As a row of tents‚ÄĒhe even daintily pings a grenade into the Skyfall kitchen window at the end. Mendes, afforded the luxury of Dame Judi, plus no fewer than four acclaimed Hamlets‚ÄĒKinnear, Wishaw, Fiennes, and Finney‚ÄĒto play spear-carriers, has always kept his sense of the theatrical: so disastrous in, say, Road to Perdition, it's perfectly suited to this kind of bombastic material. Like you I particularly loved the ‚Äúfire and ice‚ÄĚ sequence with the burning house in the background as Bond and Silva square off on the frozen lake. Bond may have lost his way, but if this is the new stripped-down template (strong visuals, strong villain) and if rumors are to be believed, Idris Elba should have plenty of fun with the role in years to come. ‚ÄĒJA