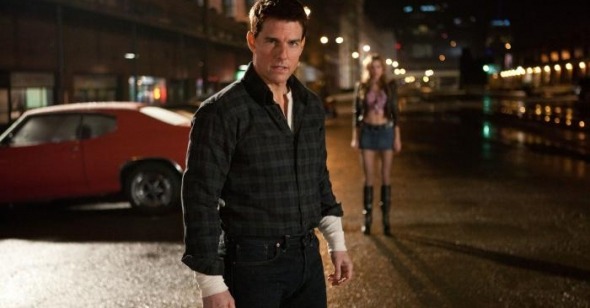 There is exactly one intentionally funny moment in Jack Reacher: Rosamund Pike’s smitten defense attorney impatiently asks the titular former army military police officer to put on a shirt during a late-night hotel room confab. He can’t, ostensibly because he only owns one shirt and it’s presently soaking wet, but really because Tom Cruise wants to flaunt the best fifty-year-old body in Hollywood, if not in all Creation. For about two and a half seconds, the character’s monastic bad-assery and the actor’s vertiginous vanity converge—for the first and last time in the movie’s 130 minutes.

Cruise’s self-regard marred last year’s otherwise extremely enjoyable and well-engineered Mission: Impossible 4, in which director Brad Bird seemed contractually obligated to emphasize his star’s physique and by-now quasi-boyish charisma even beyond the dictates of his action-hero role. So the news that Jack Reacher’s writer-director Christopher McQuarrie—whose Oscar for The Usual Suspects has been gathering dust since 1995—has been tapped for the next M:I instalment makes a whole lot of sense—and recasts his adaptation of Lee Child’s 2005 best-seller One Shot (the ninth book in the author’s Jack Reacher series) as a sort of audition piece.

And by any objective standard, he flunks it badly. Dingy, underlit, overlong, and fatally po-faced when a little levity would have gone a long way, Jack Reacher is a profoundly bad movie, which is not the same thing as an interestingly bad movie. The only thing that you can’t blame the filmmakers for is the preposterous plot, which unravels the aftermath of an incredibly convoluted public assassination; everything else is the result of conscious and conspicuously atrocious choices made on set or in the editing room. These include—but are not limited to—a greyed-out color scheme that works against cinematographer Caleb Deschanel’s usual talent for glimmering lyricism; the strenuously austere editing of rankly exploitative sequences depicting innocent civilians getting murdered in broad daylight; the stunt-casting of Werner Herzog as a ponderously platitudinous East European villain; and the direction of virtually all of the actors to pantomime awe in Cruise’s presence, as if they were exchanging dialogue with an icon or a monument, like the Grand Canyon.

In lieu of calling out some of the more ridiculous aspects of the Reacher character or Cruise’s performance—or maybe just leaving them to Andrew—I’ll say that it’s never a good thing when a hero’s journey feels like a fait accompli: Cruise’s acting here is the movie-star equivalent of a victory lap. While comparing Jack Reacher to Eyes Wide Shut is probably all kinds of unproductive (except maybe to point out that they’re almost equally long), that movie made hay out of undercutting Cruise’s matinee idol status—perhaps the only time in his career that he’s allowed himself to be used in quite that way. Jack Reacher feels very much like a movie made to line up with its star’s desires, and as a result it’s utterly and completely ridiculous and embarrassing. —AN

Like such other preternaturally successful producer-stars as Warren Beatty and Clint Eastwood, Tom Cruise has always had a pretty canny sense of how to position his chief asset—himself, natch—for minimum risk and maximum yield. One therefore must hesitate when considering Jack Reacherand ponder whether it marks merely a miscalculation. So the rather diminutive Cruise is not exactly the mental image of the apparently towering mountain-man libertarian-fascist hero of the apparently popular novels by some apparent novelist (the apparent Lee Child, née somebody else). So even when Cruise plays indestructible super-agent Ethan Whoever in those Mission: Impossible movies his peacock persona is effective not because he’s a figure of intimidation and menace but because he’s consistently placed in danger (and needs to creatively make his way out of it). So the guy’s an impressively/creepily/artificially fatless 50 years old and wants you to know it. We’ve had worse, yes?

From the moment our off-the-grid macho man is third-person-introduced via a MacGruber-style resumé rundown (“The guy’s a ghost!”) to his first appearance as an anonymous hottie vacates his bed to his telephoned threat to a villain that he intends to “drink your blood from a boot,” the only thing more consistent than the unintentional hilarity is the incredible longueur of nearly every single scene. (Director Christopher McQuarrie and his editors have a stupefying habit of holding shots about five beats longer than they need to be held; in From the East, Chantal Akerman traversed the former Soviet bloc in less time than it takes Cruise to make his way across an auto parts shop.) Throw in a lantern-jawed, gape-mouthed and bizarrely bosomy Rosamund Pike (who performs some of the slowest slow-dawning realizations in film history), a glass-eyed and fingerless Werner Herzog recounting how he wore a dead man’s coat for a year in Siberia, and Tom Cruise casually/disgustingly using the term “rape rally,” and you have a truly special kind of cinematic embarrassment—one that, while striving to be nothing more than run-of-the-mill, so incredibly miscalculates every single element of tone, performance, and effect that it points up the surreality of all that we take to be run-of-the-mill in our entertainment. Stare into the abyss that is Jack Reacher, and the abyss stares back. —AT