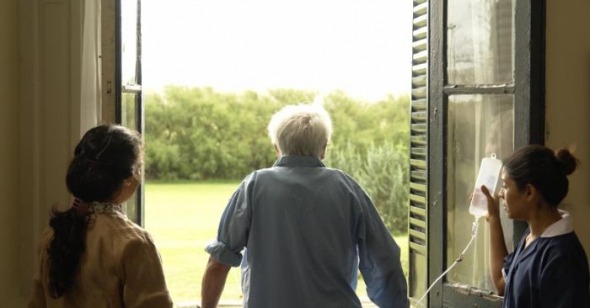 Like Wild Strawberries, to which it's heftily indebted, The Window is an exploration of mortality and memory, a movie built around a big day in the life of a moribund old-timer as he steers toward some sort of closure. Argentinean director Carlos Sorin handles it gracefully, imbuing a measure of poetry into the simple story through extended stretches of silence and richly composed frames. Still, how many quiet films about dying old men do we need? Sorin, though, saves the film from banality by always keeping one eye on the relationship between life and cinema—The Window doubles as a challenging movie about the movies’ capacity for affording immortality.

Antonio Larreta, a noted screenwriter, plays Antonio, a helpless dotard tethered to his IV and thus to his bedroom, where a five-foot trip from the bed to a writing desk requires the extensive effort and preparation that the able-bodied might apply to overseas travel. His nurses tell him what he can eat, where he can sit, what he can wear, where he can go. They deny his nearly every wish. As a character study of a sickly man, The Window intricately chronicles life’s aural minutiae and the gravitas they assume when one is knocking at death’s door. Sorin accentuates the sound of a bee’s legs clicking against a windowpane, the buzzing of flies, and, especially, the unceasing tick-tocks of a clock and the thudding pulses of a pendulum: rhythmic reminders of impermanence, time’s irreversible march.

As in Wild Strawberries, the protagonist has a loving but combative association with his housekeepers, a strained relationship with his child, and strange dreams he is eager to relate. The Window diverges from Bergman’s film in that our hero and his progeny are not coldly rational scientists but impassioned artsy types: he is a writer, his estranged son a concert pianist. As the movie opens, Antonio’s son is scheduled to visit that evening, and the house’s staff is abuzz in preparation. In one scene, Antonio’s maids rummage through his storage, literally unpacking his life, digging through the past. Among their discoveries is a mystifying painting, depicting what looks like a solid-black anthropomorphic insect monster, like the creature from Jeepers Creepers, posing proudly. Evoking the subterranean black beetles that appear in Blue Velvet’s opening, to subvert that film’s initial images of wholesome Americana, the painting suggests that Antonio’s life, or at least his bond with his boy, is built upon a rotten, obscured foundation. This is the day to set things right: biscuits are baked, aged champagne is fetched, outfits are chosen, a menu is decided upon, hair is trimmed, and the old piano is tuned, an overt metaphor for repairing the father and son’s busted relationship; tin figurines, blocking some of the instrument’s hammers, are plucked out like thorns from an elderly lion’s paw.

Midday, Antonio defies his captors’ orders: he sneaks out of his house—IV bag in one hand, walking stick in the other—escaping his illness-dictated incarceration for what will probably be his last stroll, through the vegetable garden and into his fields, where he surveys the expansive grandeur of his fiefdom. (His stately manor, boasting a boldly pink facade, is situated in the midst of 750 acres in the South American sticks.) Antonio entering the outside world recalls Buster Keaton breaking the fourth wall (and the laws of physics) in Sherlock, Jr., violating the virgin movie screen and joining the action therein. Antonio has passed through the looking glass, or the windowpane, as it were—the window through which he often absorbs the natural world, as though it were a theater for one. The vividness of the window-framed image contrasts the mundanity of life on the other side of the pane; sun-kissed interiors of white and brown give way to shimmering and sun-soaked exteriors of wheatfield-gold and wildflower primrose, while the dull clangs of indoors are replaced with the rich timbres of natural symphony: breezes rustle the earth, tall grasses crunch underfoot, birds cheep piercingly. To prove his newfound virility, Antonio takes a leak, marking his territory.

From the beginning, Sorin has made it clear that The Window is a movie about movies. It opens with Antonio recounting a dream, to which the director applies a silent-film aesthetic: soft focus, overexposure, black-and-white stock. Underneath the narration, we hear the whirr of a running projector—Sorin conflating cinema with memory and the unconscious. In the dream, Antonio recalls a babysitter he hadn’t thought of in decades; searching for her name, he suggests “Garbo”! Sorin is working through some truly Bazinian ideas about cinema and postmortem preservation—Antonio’s babysitter survives to Antonio through dreams and recollection; to the audience, she survives through celluloid.

A key intertext here is Adolfo Bioy Casares’s sci-fi novella The Invention of Morel, whose title Antonio drops halfway through. The book, like this film, grapples with issues of self-perpetuation, as it chronicles a fugitive’s stay on a mysterious island populated with spectral figures, who turn out to be part of something like a living, screenless cinema, invented to immortalize a group of friends’ pleasurable weekend holiday. Near death, Antonio’s thoughts drift to what he’s leaving behind, his legacy, his own spectral figure: his lands and his son. Through each, he lives on as a shadow, as though a filmic image. Of course, to be preserved in posterity, one first must die, and Antonio’s trip into the outside world, into the “image,” nearly kills him: He collapses in the fields, arms spread out in a Christlike pose. Rescued and returned home, he is tucked back into bed. At The Window’s end, Sorin plays the sound of a filmstrip making its flapping exit from the teeth of projector gears. The film is over, obviously, but so too, the director leads us to infer, is a life. Because for Sorin, life is movies, and vice versa.