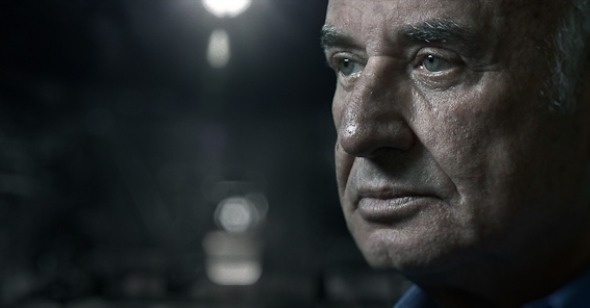 Chorus of Conscience
By Eric Hynes

It‚Äôs impossible to watch the interrogational new documentary The Gatekeepers without thinking of The Fog of War, a film that director Dror Moreh has unsurprisingly cited as his primary inspiration. But where Errol Morris‚Äôs Oscar-winner sifted through the wreckage of Vietnam-era foreign policy via the voice a single, if admittedly monolithic man‚ÄĒformer American Secretary of Defense Robert McNamara‚ÄĒThe Gatekeepers surveys the landscape of post-Six-Day-War Israel through the recollections of no less than six former heads of the Israel Security Agency (ISA), aka Shin Bet. With those numbers, Moreh‚Äôs film works less as an in-depth profile (though, considering McNamara‚Äôs polished opaqueness, constricted candor, and rope-a-dope control of the narrative, that wasn‚Äôt The Fog of War‚Äôs strength either) than as a revelatory group photo. Different personalities and philosophies are revealed, but it‚Äôs the ways in which the interviews overlap, in which these strong-willed voices coalesce into a mournfully prophetic chorus, that makes the film such an astonishing and essential document. The power of Moreh‚Äôs film lies not in its subjects‚Äô contrition, but in their collective cynicism, their shared sense of futility.

The film proceeds in a roughly chronological fashion from 1967‚Äôs Six-Day War, which expanded the boundaries of Israel and began the nation‚Äôs modern era of Palestinian occupation, through the rise of terrorism in the seventies, the First Intifada in the eighties, the failed peace process of the nineties, the Second Intifada in the aughts, and up to the present day; along the way numerous notorious events are recounted in detail, from the Bus 300 affair to Yithzak Rabin‚Äôs assassination and numerous ‚Äútargeted assassinations‚ÄĚ of Palestinian terrorists. According to Avraham Shalom, who served as Shin Bet director from 1981‚Äď86, serious considerations of a Palestinian state vanished with the rise of terrorism, which became both the focus of the agency and the excuse for more intense and emboldened occupation. It was important, he says, to have to contend with a ‚Äúlow flame‚ÄĚ of terrorism, ‚Äúso that we could do what we want.‚ÄĚ But the flame became significantly higher with the First Intifada.

The recounting of recent historical events isn‚Äôt the primary function of The Gatekeepers‚ÄĒthere are far better texts than this one for sifting through the who, what and why‚ÄĒwhich instead seeks to understand the rationale behind Israeli security policy and strategy, and dig into the consciences and seen-it-all perspectives of those charged to carry it out. By its nature, Shin Bet has always operated in the shadows, an invisible C.I.A.-like force that marshals surveillance and counterterrorism and interrogation and even militaristic missions without public oversight. Yet here they speak in detail, giving their anecdotes, even those that have entered into the public record, the impact of information suddenly declassified. The subjects aren‚Äôt uniformly self-critical or confessional, but each does seem weary of the world he helped wrought, and generally haunted by hindsight.

‚ÄúWhat‚Äôs unnatural is the power you have,‚ÄĚ says Yuval Diskin, Shin Bet director from 2005‚Äď11, and the first subject heard from in The Gatekeepers. Just a year removed from service, Diskin provides one of the frankest voices in the film. He describes the impossible task of deciding when to fire on a target‚ÄĒwhen to kill another person and risk taking out innocents in the process‚ÄĒand when, despite momentum and pressure to act, to do nothing. ‚ÄúDon‚Äôt do it seems easier but it‚Äôs often harder,‚ÄĚ he says, while Moreh shows eye-in-the-sky footage of a target being tracked, crosshairs centering over a moving vehicle on a residential street‚ÄĒthe wait, the potential, somehow more harrowing than the inevitable detonation.

If the film has a star, without question it‚Äôs Ami Ayalon, who served as Shin Bet director from 1996‚Äď2000, and restored order to an organization shell-shocked by the Rabin assassination. A sinewy, bald ex-navy man with a forceful speaking style and tell-it-like-it-is charm (he became a politician and elected official after his service), Ayalon speaks of coming to the realization that, after decades of occupation and suffering, and with little long-term change on the horizon, the Palestinians seek an equality of suffering. Which is not quite the same as an eye for an eye‚ÄĒit‚Äôs the futile, fatal logic of blood feuds. ‚ÄúWe win every battle but we lose the war,‚ÄĚ he says.

Though Ayalon is the film‚Äôs most charismatic player, Shalom stands as Moreh‚Äôs biggest get, as he‚Äôs the eldest and seemingly most circumspect of the six. After claiming to not remember, the dead-eye-gazing, prodigiously hairy-nostriled ‚Äúbully,‚ÄĚ as others refer to him, changes tack and decides, on camera, to detail how Shin Bet murdered the Palestinian hostage-takers in the Bus 300 affair. He speaks not of regret or guilt, but of how those in charge betrayed his organization, explicitly granting a license to kill and then leaving him out to dry. He also bemoans the presence of the press, without which there‚Äôd have been no outrage. ‚ÄúIn the war against terrorism, forget about morality,‚ÄĚ he says. Yet his sense of injustice, or at least efficacy, is provoked by the modern tactic, defended by directors like Avi Dichter (director from 2000‚Äď05) of ‚Äútargeted assassinations,‚ÄĚ in which individuals are blown to smithereens via one-ton bombs dropped from the sky. ‚ÄúOverkill,‚ÄĚ he maintains. ‚ÄúIt‚Äôs security stupidity.‚ÄĚ And his final statements prove to be the most damning of the film, comparing, with caveats, the behavior of Israelis towards Palestinians to the Nazis towards their neighbors. ‚ÄúWe‚Äôve become . . . cruel,‚ÄĚ he says. ‚ÄúTo ourselves as well.‚ÄĚ

That wide swing of perspective, from defending specific tactical decisions but ultimately questioning the wisdom of the entire endeavor, is echoed repeatedly among the subjects. ‚ÄúWhen you retire you become a bit of a leftist,‚ÄĚ says Yaakov Peri (1988‚Äď94), a man once named the 125th greatest Israeli of all time by popular news site Ynet. It would be a stretch to claim that all six of the subjects are out and out leftists, but to a man their vision for change in Israel and the Middle East doesn‚Äôt involve ultimatums or drawing ideological lines in the sand, but for dialogue‚ÄĒwith everyone. Shalom even wants dialogue with Mahmoud Ahmadinejad (though he hilariously, and pointedly, forgets his name). After all, he says, there‚Äôs ‚Äúno alternative‚ÄĚ to discourse.

Moreh isn‚Äôt the visualist that Morris is, but he does a fair job of informing and engaging the eye in-between his talking-head clips. To illustrate events for which there‚Äôs limited footage, Moreh employs a clever and effective strategy: he re-creates scenes using miniature figures posed in highly stylized sets, the palette and individual poses chosen to fluidly bridge the gap between sporadic archival photographs. Less effective is the integration of archival video footage, which Moreh presents in an incorrect aspect ratio, blown up and widened out. The increasingly common distortion of converting 4:3 video footage into widescreen needs to stop. In The Gatekeepers, that lazy choice manages to degrade long stretches of the film, telling the eye that the only images of true value are those devised specifically for this film. Such a presentation may have become acceptable for watching soccer matches on a crap screen above an industrial fridge in a bodega, but in a film that has potential to affect the way we view the politics and future of the Middle East, surely another tack could have been considered.