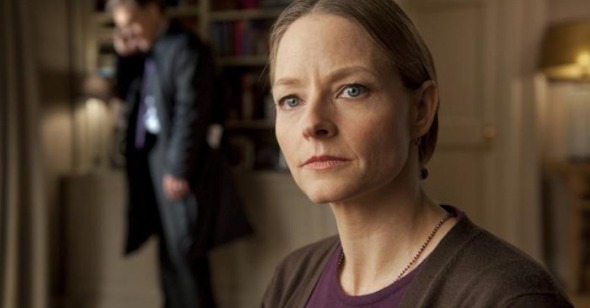 On paper, it‚Äôs easy to see why Yasmina Reza‚Äôs Tony award‚Äďwinning play God of Carnage might have appealed to Roman Polanski, who with Reza has adapted the play and directed it into Carnage, a brisk, amusing, and frustrating cinematic chamber drama. A claustrophobic bourgeois horror story about two couples of Brooklyn parents who meet over cobbler and coffee after one of their sons strikes the other with a stick, Reza‚Äôs play has superficial similarities to previous Polanski films like Rosemary‚Äôs Baby, Cul-de-Sac, and Repulsion, each of which places its protagonists in confined spaces over extended periods of time and observes as the carefully calibrated identities they present to the outside world slowly come apart at the seams.

Here, lawyer Alan (Christoph Waltz) and investment broker Nancy (Kate Winslet) come to the home of Penelope (Jodie Foster) and Michael (John C. Reilly) recalcitrant and polite, willing to apologize for their son‚Äôs behavior and determined to negotiate a peace deal. It‚Äôs not long before Penelope‚Äôs passive-aggressive asides (she complains that her son Ethan has been ‚Äúdisfigured‚ÄĚ and then wonders whether Alan and Nancy‚Äôs son Zack has expressed an appropriate amount of guilt) and Alan‚Äôs bald disregard for social niceties (among other things, he‚Äôs constantly on his BlackBerry dealing with a professional crisis involving a pharmaceutical company) lead all four into a fierce battle of wills in which alliances dissolve and are reconfigured in multiple and myriad ways.

As the credits roll, Carnage opens with the boys hanging out in long shot, in a place the characters later refer to as Brooklyn Bridge Playground (since it‚Äôs clearly filmed in New York, it‚Äôs obviously not shot by Polanski, but one can assume he conceived the sequence). The kids fight in the distance; the camera dollies in just a few inches, still far removed from the boys, when Zack turns, holding his stick, and hits Ethan. The camera rarely moves in Carnage, so this early, subtle dolly has force behind it‚ÄĒit‚Äôs a tip that we should be watching closely. Indeed, despite its considerable idiocies, Carnage is a movie that has clearly been thought through. There are too many setups, too many strange and unexpected visual decisions, for the movie to feel improvisatory. It takes place mostly in a single room, and Polanski and his DP Pawel Edeman are almost always using camera placement and depth of field to suggest something about his characters and the relationships between them. There is an idea in almost every shot.

Polanski‚Äôs biggest problem is his source material. Thoughtful camerawork can‚Äôt get him past the superficiality of Reza‚Äôs characters or the staginess of her play‚Äôs central conceit. Prissy Nancy, imperious Alan, smug Penelope, and accommodating Michael are all meant to be types. As things spiral out of control, the play peels away their layers, attempting to reveal ugly and ‚Äúuniversal‚ÄĚ truths about class and gender, parenthood and marriage, selfishness and moral responsibility‚ÄĒtruths that are hidden by the physical comforts and bustle of upper-middle-class urban life. The anguish Alan expresses when Nancy tosses his BlackBerry into a vase is matched by her indignation when Penelope chucks her purse, filled with makeup and cosmetics, across the room. These characters react in this manner because they depend on the distraction and reassurance that these commodities provide to keep them from asking the big questions that rear their heads in the film‚Äôs second half. They also react this way because that is how they are written to behave.

The whole thing is a construction. Polanski and Reza must constantly invent reasons, most of them unconvincing, for Nancy and Alan to stay at Penelope and Michael‚Äôs improbably large apartment. Rational people would never stay in this social situation. But they must remain, through insults and screams, vomit and drunkenness; otherwise there would be no movie. The world presented onscreen and the characters who inhabit that world feel fabricated. These characters' moral and emotional crises are forced. And this Brooklyn is a simulacrum. Given Polanski‚Äôs fugitive U.S. status, it‚Äôs easy to doubt that we‚Äôre even seeing Brooklyn out the window at all‚ÄĒmaybe it‚Äôs Paris. There is no Warren Avenue in Cobble Hill Brooklyn (Warren Street, on the other hand . . . ); and I‚Äôve never heard an American outside of Chicago refer to an elevated train as the ‚Äúel.‚ÄĚ In short, everything in Carnage, down to the smallest of details, is both forced and false.

Still, the movie offers considerable pleasures, thanks to its game and able stars. Foster and Waltz, in particular, bring sinister wit and humor to their roles. More cerebral than their counterparts, they spar, almost from the beginning, with a certain in-on-the-joke slyness. Carnage never has a chance of achieving authenticity, so instead Foster and Waltz dispense with any fidelity to naturalism and take their performances over the top. She flirts with a ‚Äúkill them with kindness‚ÄĚ approach to Zach‚Äôs parents, but she‚Äôs all too quick to mutter under her breath that her son ‚Äúhas no face left.‚ÄĚ Waltz, channeling his Oscar-winning role as Inglourious Basterds‚Äô Colonel Landa, consumes her pear-apple cobbler with relish and, upon learning of the secret ingredient, exclaims ‚ÄúGingerbread! Fantastic!‚ÄĚ, snortling like a deranged pig. If the performances sometimes border on camp, it‚Äôs never really cause for concern: whether or not Reza acknowledges it, Foster and Waltz‚ÄĒand, one suspects, Polanski as well‚ÄĒknow that they are already working in the realm of caricature. They might as well have fun with it.