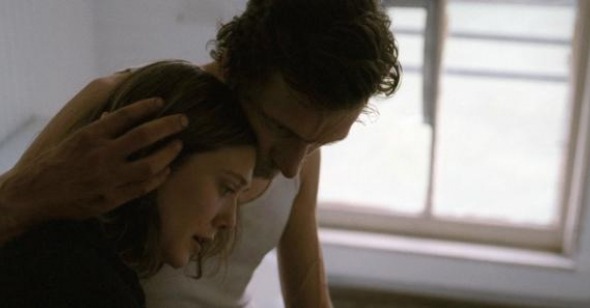 Which Is Which
by Adam Nayman

Like Jeff Nichols‚Äôs Take Shelter‚ÄĒits only real rival for the title of Fall‚Äôs Best American Film‚ÄĒSean Durkin‚Äôs Martha Marcy May Marlene concludes on a shot that‚Äôs either totally declarative or sneakily ambiguous. In both cases, it‚Äôs up to the viewer to decide whether the filmmaker has placed all of his cards on the table or is still holding a couple close to the vest. The comparisons between the two films don‚Äôt end there, either. While largely dissimilar in terms of style and subject matter, Take Shelter and Martha Marcy May Marlene are movies that warily examine gender roles‚ÄĒflipped mirror images of characters looking for a way out to find themselves ever more tightly constricted.

Nichols‚Äôs film is more obvious about its intentions in this regard. As in Nichols‚Äôs 2007 Shotgun Stories, Michael Shannon is used‚ÄĒvery well‚ÄĒas a stand-in for a kind of halting, anguished masculinity: he‚Äôs a man of action who‚Äôs not sure what to do. Plagued by nightmares of a world in flames, his Curtis LaForche internalizes his anxiety so as not to alarm his wife (Jessica Chastain) and young daughter, only to find that he‚Äôs cracking under the strain of holding it all in. We‚Äôre cued, and not always subtly, to understand that Curtis‚Äôs fears of external threat represent his doubts about his ability to hold things‚ÄĒhis sanity, his household, his authority‚ÄĒin order, and that he‚Äôs simply not wired to ask for help: in the film‚Äôs best scene, he goes to a mental-health counselor only to hijack the session by producing a do-it-yourself questionnaire and bluntly self-diagnosing his symptoms. When, in a later scene, he finds that this patient but basically hapless female counselor has been replaced by a male colleague, he hurriedly leaves the room‚ÄĒa moment that places Nichols‚Äôs true subject in sharp, ardent relief.

One of the criticisms of Take Shelter is the way it uses the real-world referent of inherited paranoid schizophrenia as a justification for its intermittent hallucination sequences: Curtis slips in and out of delusions like daydreams, spiking Nichols‚Äôs otherwise realist presentation with genre-flick flourishes. (A sequence with some CGI crows reminded me, not unpleasantly, of Larry Fessenden‚Äôs passionately threadbare spook-house tactics.) In Martha Marcy May Marlene, the protagonist also slips between realities, but we‚Äôre not supposed to (I don‚Äôt think) separate her experiences along a real/imagined binary: rather, 19-year-old Martha (Elizabeth Olsen) oscillates wildly between two time frames. In the present tense, she‚Äôs holed up with her older sister, Lucy (Sarah Paulson), and Lucy‚Äôs husband, Ted (Hugh Dancy), at their cottage in upstate New York‚ÄĒa furtive houseguest either unable or unwilling to explain her absence over the preceding two years. The flashbacks fill in the blanks: she‚Äôd been living in a farmhouse in the Catskills as a member of a quasi-religious cult presided over by the charismatic Patrick (John Hawkes).

The dramatic tension in Martha Marcy May Marlene is mostly bound up in the lake house scenes, as Martha‚Äôs clammy countenance and strange behavior start to alienate the family who‚Äôve agonized over her whereabouts: Ted‚Äôs annoyance and Lucy‚Äôs heartbroken frustration boil over in dinner-table confrontations and whispered discussions about kicking her out. But the film‚Äôs power derives from the flashbacks in the farmhouse, even as Durkin favors quotidian details over sensationalistic effects. He patiently constructs a portrait of an enclosed social ecosystem that exploits the feelings of young women who‚Äôve been discarded in their previous lives. There are young men on the farm, but for the most part the inhabitants are female, living in a configuration that‚Äôs part college-dorm, part weekend-survivalist shtick.

Crowded together in cramped rooms, sharing wardrobes and beds, the girls form strong emotional attachments laced with elements of competitiveness. Patrick, a soft-eyed charmer, welcomes each new lamb into the fold with touchy-feely attentiveness, only to gradually distance himself as he drifts towards the next set of recruits. We see how the women are de-individualized through verbal gamesmanship‚ÄĒrepeated, subliminally effective phrases and flattering rhetoric about becoming leaders in their own right. He also gives them all pet names, which is how Martha becomes ‚ÄúMarcy May,‚ÄĚ subject of a finger-picked ode with the pseudo-poetic and highly telling refrain ‚Äúshe‚Äôs just a picture on the wall.‚ÄĚ Patrick is freely sketching these women in his own image, and their acquiescence has as much to do with their own lowered self-esteem before the fact as his homespun Svengali act. Hawkes, always a powerful actor (he was even good in a tiny role in the dreadful Contagion), doesn‚Äôt have a lot of dialogue but compensates with some brilliant physical acting: he carries himself in a way that almost seems wispy and frail until his posture hardens and he becomes a looming presence.

Patrick‚Äôs divide and conquer M.O. also extends to physical subjugation, including an initiation ritual that is a sexual violation framed as spiritual purification. Durkin pulls back from the spectacle of a drugged, white-robed Martha getting anally raped by Patrick not out of squeamishness or canny notions of restraint, but because the film is so deep inside its main character‚Äôs point of view: we come to understand the true nature of Patrick‚Äôs tactics and character at the same pace as Martha, except in her case, it‚Äôs an entirely retroactive understanding‚ÄĒand all the more upsetting for that.

What‚Äôs daring about Martha Marcy May Marlene is that we‚Äôre denied any view of its main character before her transformative experience. She‚Äôs introduced to us as a jumpy, anxious mess‚ÄĒshe‚Äôs nearly catatonic when Lucy picks her up at a roadside diner‚ÄĒand even when we circle back to her arrival at Patrick‚Äôs compound, she‚Äôs already damaged goods: her blithe, neo-hippie chick demeanor seems like a defensive pose, a way of disavowing some past rejection. The scenes between Martha and Lucy hint at a broken home, but we‚Äôre left to imagine most of the details, meaning that we‚Äôre left with a real rarity in American cinema: a frayed, inscrutable female lead who‚Äôs all hard edges and loose ends. (Kenneth Lonergan‚Äôs bruised, faintly ridiculous new-old drama Margaret tills similar terrain.) Olsen‚Äôs performance is very impressive in that she never makes Martha an object of pity. Rather, her arc across the two timelines‚ÄĒfrom pliability to rebelliousness in the first, leveling out into spooked sullenness in the second, frustrates our engagement. Sniping with Ted over matters of etiquette and economics, Martha still seems locked into her learned behavior, and, even more worryingly, seems to long for it. Patrick‚Äôs sleazy father/lover act condoned her adolescent petulance while also tamping it down‚ÄĒa sadly irresistible dynamic.

Durkin trusts the actress to manifest these conflicting emotions and thus doesn‚Äôt nudge too hard‚ÄĒuntil, inevitably, he does. It‚Äôs not that the eerie, portentous tone of the early passages can‚Äôt support the detour into thriller territory‚ÄĒthe filmmaking is entirely of a piece, casting the past in shadowy tones that subconsciously encroach on the even lighting of the cottage scenes. The revelation that Patrick and his followers were staging home invasions‚ÄĒand that one went brutally awry‚ÄĒis not necessarily implausible. But it heightens the stakes in a way that‚Äôs a little too insistent and, well, movie-ish. Instead of a movie about a girl coming to terms with the fact that she can‚Äôt outrun her personal demons‚ÄĒthat she‚Äôs the phantom haunting each seemingly safe harbor‚ÄĒMartha Marcy May Marlene becomes a movie about a girl outrunning literal demons: a misguided phone call back to Patrick and Co. motivates a road trip to reclaim their wayward follower, a development made freakier by the fact that we know for a fact the group has blood on their hands.

These late sequences are very well done, but there‚Äôs still something disappointing about them‚ÄĒa suggestion that all the controlled, concise stuff that‚Äôs come before is just a pretense to a backwoods horror show. And this is where we return to that idea of declarativeness versus ambiguity, because it‚Äôs possible that Durkin is actually doing something very smart under the guise of conceding to formula‚ÄĒthat in merging the two timelines he‚Äôs created a new reality as blurred and confused as Martha/Marcy-May/Marlene herself. Just as Take Shelter‚Äôs Coen-biting final image may or may not actually be ‚Äúhappening‚ÄĚ‚ÄĒor, depending on how you look at it, happening for the first time to somebody other than Curtis‚ÄĒDurkin‚Äôs nightmarish exit point could mark the moment where the past threatens to overtake the present, a figurative gesture rather than a literal depiction of peril. If this is the case, then Martha Marcy May Marlene must be taken as a work of sustained skill and unique vision in spite of some of its more recognizable Sundance-buzz-item trappings; if Durkin is actually aiming lower, then all he‚Äôs done is make a film good enough that its flaws merit real consideration rather than become grounds for dismissal.