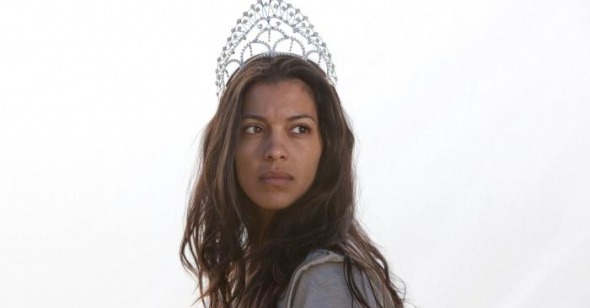 Up until now, Mexican director Gerardo Naranjo‚Äôs movies have seemed more devoted to energy than content. Earlier efforts like I‚Äôm Gonna Explode were brash and callow little things, translating the primal diegetic rebellion of Jean-Luc Godard into Spanish, enchanted by method, indifferent to message, positing his characters in a guerrilla war against the echoes of a distant history. But Naranjo‚Äôs new film, Miss Bala‚Äîamong the toasts of this year‚Äôs Cannes Film Festival‚Äîmay reveal his early work as the efforts of a revolutionary filmmaker killing time until his revolution.

Mexico has long been subjected to the hyper-violent and amorphous war between the DEA and the various drug cartels, but President Felipe Calder√≥n‚Äôs 2006 crackdown on the criminal organizations has seen the conflict escalate beyond all precedent, resulting in the deaths of some 40,000 Mexican citizens over the last five years. The indiscriminate collateral damage has reduced several of the country‚Äôs states into battlegrounds, the violence almost casually achieving a reach and velocity more common to genocidal dictatorships. The bloodshed that has transformed Naranjo‚Äôs country has begun to transform his art: the broken psyche of civilian life has driven the filmmaker to refine and make raw his approach to cinematic expression.

Miss Bala begins still and shrouded, as Laura (Stephanie Sigman) slinks through the shadowy early morning half-light of the casually dilapidated house she shares with her father and younger brother. Sigman is a tall creature of tough beauty, and our introduction to her is among the last moments of the film in which she seems loose and comfortable in her own body, for as soon as she leaves the house and enters the slapdash Miss Baja pageant, her every muscle constricts, as if always bracing for impact. The fluid long take with which Naranjo kicks things off anticipates the stylistic fulcrum of the film‚Äôs visual grammar‚Äîthese patient shots suggest infinite possibilities in depicting the bottling of Laura in a world of relentless vulnerability, wherein violence never has to penetrate the frame because it‚Äôs already there, waiting to blow in like a gust of wind.

Laura is always going somewhere, but the scene in which we first meet her is the only time we see her departing for her destination with a spring in her step‚Äîshe‚Äôs off to meet up with her friend Irene so that they can arrive at the Miss Baja auditions together, a casually awful affair from which they‚Äôre disqualified faster than you can say ‚ÄúTony Manero.‚Äù At Irene‚Äôs insistence the girls retreat to an ominously fortified party, during which Laura‚Äôs bathroom break is interrupted by a gang of heavily armed men descending from the rafters, the leader of whom warns Laura to escape before the bloodshed starts.

That man, introduced as angel of carnage, is soon revealed as cartel leader Lino Valdez (a feral Noe Hernandez), and the domineering role he assumes in Laura‚Äôs life‚Äîusing her for assignments and refuge‚Äîwill plunge her so deep in the ever-complicating saga of the drug wars that she quickly loses sight of the surface, by proxy becoming a vessel for the cartel, the DEA, and the audience alike. Laura is thus our unwitting tour guide through the mess of murders and reprisals that comprise the corporate policy of the cartel trade, though Naranjo‚Äôs film determinedly omits any actual drugs, pointing instead to the inertia of quasi-organized violence as the drug wars‚Äô renewable source of energy (all the money seems used to sustain their fight, not that they appear to have time to do anything else with it). Lino and his anonymous goon squad are naturally always a touch more informed than Laura, but the generously wide single takes with which Naranjo captures the frequent spats of violence unite Laura and Lino together in the chaos. Naranjo‚Äôs insistent, archly cinematic compositions‚Äîwell-suited to the lightly ridiculous pulp narrative‚Äîallow every frame to contain the potential of Mexico at its worst, the exaggerated horrors that threaten Laura‚Äôs body fast becoming a stand-in for the psyche of an entire country. That Miss Bala is loosely based on a true story is, for all of the madness, ultimately unsurprising, as Naranjo creates a country wherein a life untouched by the cartels seems impossible (a notion hammered home by a scene in which Lino turns Laura‚Äôs home into a makeshift base of operations).

Naranjo returns time and time again to Sigman‚Äôs flesh and frame; the film‚Äôs plot is perhaps most explicitly motivated by Naranjo‚Äôs desire to put his lead actress in scenarios primed to make different uses of her body. We get our first good look at her during the Miss Baja pageant, which surveys Laura from head to toe before Naranjo can isolate her individual parts in later scenes. Her rippled stomach is a great place to duct-tape hidden wads of cash, her flawless skin an invitation for whizzing bullets (the threat of which is made uncommonly palpable in part thanks to exquisite sound design). Her sexuality is inevitably involved, but Naranjo regards it with no greater importance than he does any other of her attributes. By the time Lino is humping Laura for a hot second in the passenger seat of his Jeep, the act seems less of an expression of primitive desire than it does Lino‚Äôs ultimate means of violating Laura‚Äôs space and agency, making literal the cartel‚Äôs penetration of her life. Miss Bala functions as a treatise on the indifferent physiological toll of urban warfare, as well as the extent to which such conflict cannot survive on the periphery, but must mercilessly devour the lives of those nearby in order to sustain itself.

Laura‚Äôs journey is eventually complicated to the point of abstraction, for both Naranjo‚Äôs protagonist as well as his audience (an idea that runs through the film with such velocity that it pierces the end credits, which present the names of those behind the film in an unnavigable block of white text). For a stretch of time before its fierce final set piece, Naranjo briefly allows the film to get lost in its drift between portraiture and kaleidoscopic summation (when The Battle of Algiers nods don‚Äôt apply, Miss Bala evokes Lindsay Anderson‚Äôs O Lucky Man! in its wandering eye and lateral movement). But a brief return to the long-forgotten Miss Baja pageant is a devastating reminder that Laura‚Äîfor all of the terrors she‚Äôs witnessed and survived‚Äîhas doubled back on her own trail. She‚Äôd been there just a few days prior, parroting her audition line directly into Naranjo‚Äôs camera: ‚ÄúMy dream is to represent the beautiful women of my country.‚Äù The tragedy of the blistering Miss Bala is that Laura‚Äôs dream comes true.