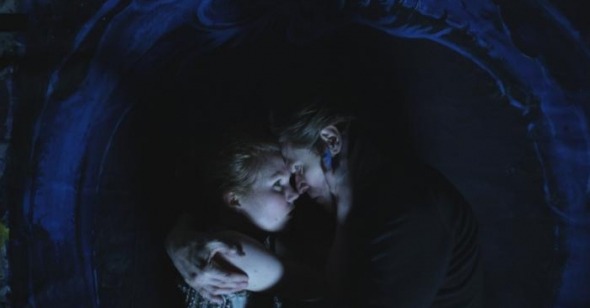 4:44: Last Day on Earth asks the question: if the world were to end tomorrow, how would you spend the remaining hours of your life? Despite the far-reaching moral implications of this premise, Abel Ferrara‚Äôs take on the apocalypse is neither catastrophic nor metaphysical in tone. In fact, his answer could be easily summarized: staying in, some chatting on Skype, a lot of sex.

New Yorkers Cisco (Willem Dafoe) and Skye (Shanyn Leigh) await the end at home. The reasons for the impending destruction reach us, confusedly, from the background: various talk shows discuss the sudden consumption of the ozone sphere, religious gurus address the audience, Al Gore has his own back. It seems clear that humankind bears the responsibility for what is about to happen: as to the specific causes, however, the explanations provided by the film are purposely vague.

Instead, Ferrara directs our attention to his characters. We‚Äôre led to closely follow their movements within their apartment, their changing attitudes and emotions. As the narrative slowly progresses, we purposefully keep wondering why, out of all the people in the world, we are stuck at the end with this particular twosome: an older man and a younger woman, an actor and an artist, caught in the push-and-pull of mutual affection. What we mostly witness is the intimate, tactile substance of the couple‚Äôs relationship‚ÄĒtheir lovemaking is brought to the fore, the camera indulging in close-ups of their bodies to an extent that feels almost intrusive. In the sheltered nest of their Manhattan loft, Cisco and Skye celebrate a distinctively human ritual. Faced with the impeding catastrophe, they are drawn to each other, to the mutual understanding and forgiving of their weaknesses. Skye temporarily loses her mind when she catches her lover Skype-ing with his ex-wife and daughter; Cisco, a former drug-addict, almost gives in to a sudden urge for cocaine. It‚Äôs at this point that we begin to understand the liberating fact that there is no special reason for us to follow this specific couple instead of any other.

Cisco and Skye are simply fragments of humanity, whose final gestures come to represent a broader, shared search for meaning. Cisco, an actor and the more extroverted of the two, is the one who breaks through the boundaries of their domestic space: we see him repeatedly on the rooftop, addressing a city that seems to carry on undisturbed with its everyday routine; we see him dropping in at an old friend‚Äôs place, where a few mates are having the ultimate farewell party (this reunion, blessed by a jovial, convivial atmosphere, is one of the film‚Äôs most touching moments). Meanwhile, Skye stays at home, relentlessly working on a large abstract expressionist canvas; in doing this, she manages to inject the film with a kind of earthly, unspoken religiousness‚ÄĒin her meditation and painting she is making sense of her anxieties in a more private, indwelling manner.

Like the characters, the mise-en-sc√®ne also appears divided, into corresponding facets. If the apartment represents the narrative‚Äôs core focus, the surrounding cityscape and the virtual ‚Äúmediascape‚ÄĚ provide significant counterparts. In their flat, Cisco and Skye are enveloped in a number of screens: TV sets, laptops, iPads. Images flow from the outside to the inner space of consciousness, bringing news, glimpses of far-flung places, the voices and faces of the characters‚Äô loved ones. More than shaping their own reality, the various forms of media in 4:44 are intended to be traced back to their origins: they provide communication across space, enabling distant people to reach for each other. And the city‚ÄĒalthough constantly off-screen‚ÄĒprovides a final, resounding layer of humanity to the narrative. Ferrara delivers an endgame scenario free of the usual panicking and rioting, now customary to the catastrophic genre. Rather, as the planet‚Äôs last hours kick in, New York‚ÄĒas well as the other capitals of the world‚ÄĒresolves to go out in style, its streets and squares filling up for a terminal carnival.

The film was shot on video, lending this unconventional apocalypse tale a fittingly lo-fi texture. Many at the festival audience I saw it with were taken aback by the odd mix of grand narrative and bare-bones aesthetic. Yet hidden within Ferrara's distinctly disordered approach, 4:44 achieves an unexpected, powerful simplicity. Thanks to the characters‚Äô divergent yet spiritually complementary paths, the end is reversed into a luminous beginning: a closing message of love and human faith.