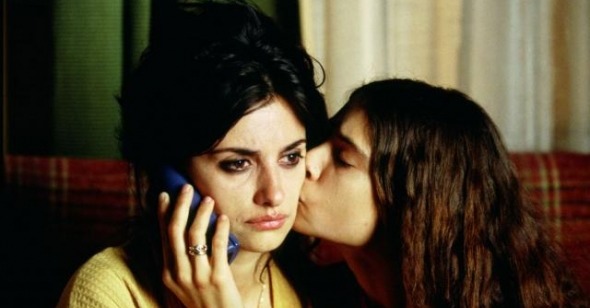 Lost in the Stars
By Vicente Rodriguez-Ortega

If Pedro Almod√≥var has become Almod√≥var, an instantly recognizable brand of world art-house authorship, it‚Äôs precisely because he invests each of his films with such an accessible intertextual pedigree. Connecting the slashed-throat intoxications of Chavela Vargas and the soothing melodies of Caetano Veloso to echoes of the tour-de-force performances of Bette Davis or the fragile humanity of Gena Rowlands, the Spanish director‚Äôs references engage with the very history of the cinematic medium itself, and yet exude a distinct Spanish flavor‚Äîultimately, he manages to reinvent and translate the ‚Äúdeep Spanish‚Äù idiosyncrasies that run through his films by signaling their relation to a wide spectrum of forms of popular entertainment from all over the world.

If his screwball Women on the Verge of a Nervous Breakdown marked the end of Almod√≥var‚Äôs crazy Eighties, the magnificent All about My Mother and Talk to Her stand as the concluding chapters of what critics have labeled as his ‚Äúmature‚Äù period. Fiascos such as Kika aside, one felt that after the above-mentioned films Almod√≥var had reached the pinnacle of the melodramatic genre and was ready to move on in new directions. Bad Education was an attempt to return to the wild, irresponsible, promiscuous days of Law of Desire and Matador, but it felt somewhat too reflective, too metacinematic, as though the raw excesses and fresh emotional simplicities of his Eighties films now needed to be contained by the audiovisual and narrative control Almod√≥var had since mastered. Volver is a significant denial of this previous effort. Featuring the long-awaited return of former muse Carmen Maura and the Anna Magnanization of Pen√©lope Cruz (in Volver she is indeed The Mother), the film leaves aside all narrative pyrotechnics and metatextual games for the sake of its simple story of women and their love for one another. In other words, the twisted and psychologically disturbed ‚ÄúAlmod√≥varian boys‚Äù of Talk to Her and Bad Education have been left behind; ‚Äúlas chicas Almod√≥var‚Äù have returned. However, far from being on the verge of any kind of breakdown, the women are way past it. Disenchanted by a life that has only rendered solitude, despair, or the utter subjection to a sterile form of lethargic patriarchal authority, these women now mourn their lost husbands, settle into loneliness after failed affairs, or mechanically cook dinner as their man‚Äôs beer-belly floats around the couch in front of TV soccer. This is the life in the outskirts of Madrid that Almod√≥var hardly ever allows us to glimpse: in this sense, the space of the city itself is the key structural absence of Volver.

One of the central preoccupations of Almod√≥var¬¥s works is the tension between his characters‚Äô troubles in coming to terms with their urbanite condition and their constant longing for the non-contaminated space of ‚Äúel pueblo‚Äù (the village). Volver, though, cancels out this dialectical dynamic‚Äîbetween the sexually liberated and yet psychologically tarnished inner worlds of the cosmopolitan city dwellers and their often irrational drive to find love in the uncomplicated and coveted routine of the timeless village-scape. Volver reduces Madrid to a couple of anonymous buildings in one of its surrounding towns, the aseptic coldness of airport hallways, and an abandoned bar that gives hope to Cruz‚Äôs matriarch and, simultaneously, hides the main source of her psychological anxiety. The film does not explore the urban world as a compound of asynchronous subjectivities, as in The Flower of My Secret or Live Flesh; conversely, Almod√≥var records the displaced village inhabitants‚Äô failure to make it through in the metropolitan jungle and effaces all the city‚Äôs recognizable landmarks. Instead, the urban universe becomes a faceless nowhere. Will Cruz‚Äôs single mother remain in the city or will she come back to her origins after all the disenchantments the urban has provided? But, what is it to come back?

In el pueblo, matriarchy rules the household and the cemetery. It‚Äôs a world of magnificent patios, homemade sweets, entirely black-clad old ladies, and a constant wind ‚Ä¶a wind that sooner or later drives everyone crazy. Volver opens with a tracking shot showcasing numerous widows as they polish their relatives‚Äô gravestones. Almod√≥var then takes us to Cruz‚Äôs Raimunda, her sister Sole (Lola Due√±as), and daughter Paula (Yohana Cobo), as they tend to Raimunda‚Äôs parents‚Äô tomb. Here, the Spanish director, for the first time, thoroughly scrutinizes el pueblo instead of sketching it as an abstract realm of uncomplicated and untarnished beauty (Tie Me Up, Tie Me Down! or Law of Desire) or a flesh-driven field of religious and sexual repression (Bad Education). El pueblo then is revealed to the spectator as a complicated labyrinth of unfulfilled desires, adulterous, incestuous relationships, and rampant bigotry, a mirror image of the desire-driven urban jungles Almod√≥var has repeatedly drawn‚Äîminus the Chanel outfits and penthouse views of city landmarks. Coming back, furthermore, signals not a pilgrimage to the village to escape the dangerous city but the return of the repressed, triggered by the miraculous reappearance of Raimunda‚Äôs mother, Irene (Maura), thought to be long dead.

This is also the much buzzed-about return of Carmen Maura to the Almod√≥varian universe for the first time since her widely publicized falling out with the director (following the enormous success of their Academy award-nominated Women on the Verge of a Nervous Breakdown). And it is precisely here where Volver fails to deliver upon the magnificence of its first thirty minutes: Despite the fact that the narrative is structured around the ghostly Irene, Almod√≥var‚Äôs camera seems too much in love with Cruz‚Äôs (and her cleavage‚Äôs) current international stardom, and only abandons her to take short detours into a series of complementary narrative threads that, in the end, remain only superficially sketched (i.e. Agustina‚Äôs doomed quest to find her vanished mother, or Sole‚Äôs depressing late-thirties spinster lifestyle).

Cruz is undoubtedly Volver‚Äôs greatest strength and weakness. Her physical beauty and Almod√≥var‚Äôs reinvention of her as a blue-collar mother, born and bred in the depths of Spain, are fascinating to watch. At the same time, the centrifugal power of her eye-popping performance overwhelms everything and everyone surrounding her. Unlike Cecilia Roth‚Äôs wholesome humanity in All About My Mother, Javier C√°mara‚Äôs frail monstrosity in Talk to Her, or Maura‚Äôs robust compassion in What I Have Done to Deserve This?, Cruz‚Äôs charming earthiness in Volver fails to engage with the rest of the film, leaving an awkward array of leftovers, made up of both melodramatic excess and restrained realism. The film is indeed an aptly crafted vehicle for its lead actress, who after years of girlish poses and pretty smiles, has managed to truly elevate her technique.

If Bad Education was a poor, excessively self-reflexive and indulgent remake of Law of Desire, Volver may be the same in relation to All About My Mother. After the layered humanism and supreme craftsmanship of that Academy Award‚Äìwinner, Volver feels slightly redundant. Has Almod√≥var exhausted his craft and archive of stories? Are his scores of fans from all over the world only going to get in future years alternative versions or slight variations of his previous films? It doesn‚Äôt really matter: audiences around the globe (except in Spain, curiously) already genuflect once the Spanish director‚Äôs name is merely uttered. Volver will undoubtedly benefit from such devotion. So, yes, Viva Pedro! Forever. One only hopes that he will stop remaking his own films and plunge us once again into unknown territories.