A Woman, a Gun and a Noodle Shop 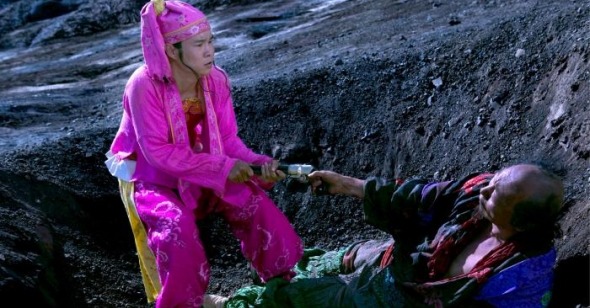 A perfect storm of misguided homage and curdled auteurist tics, Zhang Yimou‚Äôs A Woman, a Gun and a Noodle Shop manages the headache-inducing feat of both amplifying the Coen Brothers‚Äô worst directorial tendencies and mixing them with the Chinese director at his most bombastically hollow. That the film is an adaptation Blood Simple, one of the Coen‚Äôs leanest and least mannered films, makes these accomplishments all the more dubious. Just how did we get from the free-floating anxiety and methodically unspooled twists of the 1984 neonoir to the clattering sideshow of Zhang‚Äôs remake, populated by screeching lovers and buck-toothed sidekicks clowning and floundering under an ostentatiously wide-angled sky? (And after that, perhaps someone can then explain how a filmmaker who was once as engaged and thoughtful as Zhang ended up helming this nonsense in the first place.)

A comparison of titles helps to illuminate the differences in tone and attitude that define both films. Blood Simple certainly owes a debt to the names of noirs past, those terse and slangy monikers that showcased the allure of cool, doom-laced seduction: Touch of Evil, Kiss Me Deadly. If anything, the Coens‚Äô title places a greater emphasis on the double pleasure of noir, tying together the promise of the perfect crime and the inevitability of its violent end in one clever, vaguely gnomic phrase. This thoughtful streamlining of generic expectation is felt throughout the film. Obvious noir signifiers like flashbacks and voiceover remain largely ignored (save for M. Emmet Walsh‚Äôs brief musings over the opening shots of the sun-weathered Southwestern landscape, an intriguing forebear to Tommy Lee Jones‚Äô initial despairing ruminations as the sun rises on a similarly parched Texas earth in No Country for Old Men). Instead, the brothers imbue every hotel room tryst and neon-streaked barroom argument with an immediate, palpable sense of decay and sweaty foreboding. No matter how systematically they engineer the many coincidences and misunderstandings that pile up, this carefully cultivated atmosphere‚Äîcall it hothouse served cold‚Äîallows the twists to feel utterly organic. Given that they are sometimes accused of simplistic genre revisionism (and not without justification), it‚Äôs revealing that the Coens‚Äô initial foray into homage feels so tantalizingly alive moment to moment.

Then we have A Woman, a Gun and a Noodle Shop: a laundry list of archetypes capped off with a vaguely Asian element that reveals jokey affectation more than it reflects an actual engagement in transposing a story from one culture to another. It certainly sets you up for Zhang‚Äôs broad-as-a-barn-door take on the material, especially the film‚Äôs grating first act. We open on a pair of ornamented double doors that (in a prelude to the film‚Äôs light touch) explode into flames after the credits subside. The film then plops us down in the titular food stand, located in a small desert town near the Jiayu Pass in feudal-era China. When we meet the employees‚Äîincluding the mistreated wife (Yan Ni) of tyrannical owner Wang (Ni Dahong), her jittery lover Li (Xiao Shenyang), and dentally challenged waiter Zhao (Cheng Ye)‚Äîthey are entranced by a visiting Persian merchant, who sells Wang‚Äôs wife the gun that will soon trigger a series of fatal errors of judgment. But you‚Äôd never know its sinister import from the cartoonish performances, gaudy costumes, and general strain of bug-eyed farce that courses throughout this and other early scenes. It‚Äôs difficult to know what in the original source material Zhang is channeling. More than anything, these sequences evoke the most labored of the Coens‚Äô latter-day comedies, though even the flop-sweat banter of Intolerable Cruelty feels positively Hawkesian when compared to the shrieking line deliveries and flailing pratfalls captured here. There‚Äôs little point in faulting the actors, who try their damndest to wring some high-spirited absurdity out of screenwriters Xu Zhengchao and Shi Jianquan‚Äôs thin gruel of manic slapstick, shot and edited with a freneticism that mistakes fidgety excess for rollicking humor.

I get that there can be few things less productive than someone picking apart a film based upon their love of its pre-existing source material. Indeed, my initial curiosity about A Woman, a Gun and a Noodle Shop sprang from the sheer oddball disparity between text and interpreter: Zhang‚Äôs opulent pageantry and emotional sincerity transposed onto the Coens‚Äô self-aware precision. Yet if there‚Äôs value to Zhang‚Äôs film, it comes from its direct relation to Blood Simple, for it reveals how seemingly minor changes in structure and inflection can warp a finely tuned machine of a film into a wheezing jalopy.

Take, for example, the role of the hit man. In both films, a jealous husband contracts a mysterious outsider to kill his wife and lover after he himself fails at the task. The Coens cast the aforementioned Walsh as Loren Visser, a paunchy private detective. And while we know very little about Visser besides the no-nonsense effectiveness with which he works, Walsh‚Äôs rotten good-ole-boy grin and leering delivery make him very much a figure of the world in which he‚Äôs operating. Zhang‚Äôs film, by contrast, re-imagines this killer-for-hire as the unsmiling Zhang, who dispatches his victims with brutal efficiency. As played by the stone-faced Sun Honglei, Zhang carries out his murderous mission with the chilly detachment (if not the knowing nihilism) of No Country‚Äôs Anton Chigurh. Thus, A Woman, a Gun and a Noodle Shop becomes less about greedy people caught in their own quicksand than an oddly cruel tale of silly people being sliced down by a dispassionate angel of death. The film‚Äôs early forays into hectic shtick only exacerbates this tonal disjuncture; once we move into the film‚Äôs bloody second half, the prevailing feeling is that nobody on screen really deserves what they‚Äôre getting (save for the abusive Wang). Certainly, if there‚Äôs one idea that pervades Blood Simple, it‚Äôs that everybody on screen most certainly has it coming. But that most cited of Coen criticisms‚Äîmisanthropic detachment‚Äîseems a better fit for Zhang and the stylized brio with which he offs his cast of clowns one by one in A Woman, a Gun and a Noodle Shop.

Zhang, of course, is rarely a director one would accuse of heartlessness. Though his latest batch of martial arts epics don‚Äôt exactly overflow with richly empathetic characterization, Zhang‚Äôs Nineties films (Ju Dou, Raise the Red Lantern) remain brilliant examples of how a vivid pictorial style‚Äîshocks of color, carefully orchestrated frames-within-frames‚Äîcan help negotiate a delicate balance between heartrending melodrama and broadly accessible social commentary. He certainly hasn‚Äôt lost his sense of composition, as evidenced by the many striking images that pop up throughout A Woman, a Gun and a Noodle Shop. Once night begins to fall and the blood starts to flow, Zhang and DP Zhao Xiadong often keep the camera low, capturing the brilliant oranges, reds, blues, and grays in an ever-changing sky. One is almost tempted to give Zhang the benefit of the doubt here, reading into these beautiful but unsettled churnings a sublimated expression of more generalized spiritual or psychic unease. More likely, however, it‚Äôs yet another example of the empty stylistic flourishes that litter the film like fistfuls of confetti. The same goes for Zhang‚Äôs adroit handling of the multitude of narrative curlicues: effective, but effectively meaningless when the mood oscillates so wildly between asinine goofing and fastidiously art-directed violence that the betrayals and misunderstandings become stripped of emotional pull.

Also, what ever happened to Zhang‚Äôs commitment to exploring the social roles and interior lives of women, a talent that led to fruitful collaborations with such actresses as Gong Li and Zhang Ziyi? Wang‚Äôs wife is not even granted a name, much less a personality beyond some perfunctory moments of seductive teasing with her lover and headstrong yelling at her husband. It would be inaccurate to call the corresponding character in Blood Simple a richly shaded role. Abby is essentially a riff on the femme fatale, albeit given moments of confusion and vulnerability by Frances McDormand. Here, one hopes, will be where Zhang might actually enrich his material, investing the wife with a more complicated palette of emotions. And what happens? While the Coens kept Abby an active if somewhat bewildered participant in the film‚Äôs noir mayhem, Zhang has Wang‚Äôs wife collapse into a drunken slumber for roughly half the film, only to awaken for the final few minutes. It‚Äôs yet another blown opportunity in a movie full of them, though after sitting through A Woman, a Gun and a Noodle Shop‚Äôs assaultive hi-jinks, one begins to wonder why they didn‚Äôt just follow her lead.