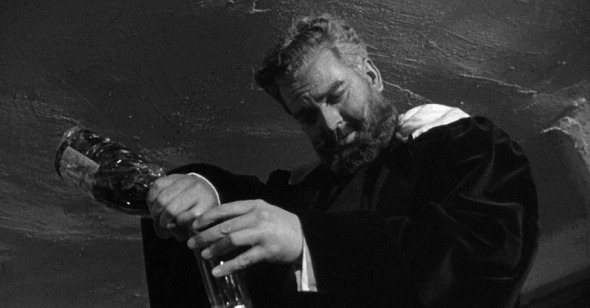 In Robert Altman's acceptance speech for his Honorary Oscar at the 78th Academy Awards (literally the only worthwhile moment in the entire broadcast), he good-naturedly likened his movies to sandcastles on the beach: Built by an enthusiastic group of people working together, the completed castles are eventually left to the tides. If you happen to be Orson Welles, however, odds are strong that your creation will be snatched when your back is turned and either left incomplete (The Magnificent Ambersons, The Stranger, etc.), or chunked and molded into several clumsy, castle-shaped lumps, as is the case with his most massacred movie, Mr. Arkadin. There are now at least six known versions of Arkadin, none of them Welles's own. The chance of there ever being a true ‚Äúdirector's cut‚Äù has been precisely nil since the director‚Äôs death in 1985, but Criterion has done as much as anyone could have possibly hoped in collating what's out there and presenting it in a hefty three-disc, one-novel set.

Is it too much? I think not, since I share Peter Bogdanovich's stated optimism about the project's ‚Äúimportance.‚Äù The set's greatest special feature, after all, might be piece of mind‚Äîfew people may need to own three versions of this film, but it's a quiet comfort to be assured that you're unlikely to ever want more. Also, the inclusion of an entirely new ‚Äúcomprehensive‚Äù version enters the package itself into the labyrinthine lore of the adventures of Arkadin the movie(s)‚Äîa topic that many justly insist is as fascinating as anything onscreen.

Briefly: In Spain, 1954, Welles began shooting the film, based on a novel of the same name (written by either him, Maurice Bessy, or both of them‚Äîthat's another mystery). By the end of the year he had finished the shoot, which alternated between Spain, Munich, and the Riviera. Though he had edited and worked on postproduction throughout, he withdrew in 1955 in order to work on his projects Noah and Don Quixote, under the condition that he would be given final cut on Arkadin. Mid-year, Welles and producer Louis Dolivet had a bad falling out, after which Welles was never able to work on Arkadin again. The movie, renamed Confidential Report, and missing the entire flashback structure, premiered in London. Later, a Spanish version (with lead actor Robert Arden's name misspelled, which would happen again) premiered in Madrid. And in 1962, the New Yorker Theater ran a print newly uncovered by Bogdanovich, known as the Corinth version, with flashbacks now intact.

Criterion includes the Corinth, Confidential Report, and the new version, along with essays defending each. As a bit of perspective refresher amidst all the chatter of differences, ‚Äúcomprehensive version‚Äù co-editor Stefan Dr√∂ssler acknowledges that the dissimilarities are mostly structural, and that ‚Äú80 to 90 percent of the film is the same in each version.‚Äù Casual newcomers (will such a person rent/buy this?) should watch the new version if only because it's the most coherent, and thus gets the most easily enjoyed mileage out of the story.

But no matter the version, Mr. Arkadin's successes and failures are fairly easy to distinguish. The film is the story of a financier, Gregory Arkadin, who hires a skuzzy American goods runner to compile a report on Arkadin's own back story, ostensibly because his amnesia has left him unable to remember it. It's hard not to conclude that, in hindsight, the Cahiers clique who in 1958 called it (actually Confidential Report) one of the twelve best films ever made were being a bit o'erhasty. Disregarding its glaring inferiority to its model (Citizen Kane), the acting alone is enough to knock it out of such lofty contention. Every review I've read takes a moment to lament the clanging unlikability of leading man Robert Arden, and with good cause; lacking even the miniscule charisma of a Joel McCrea or Audie Murphy, the radio actor's presence is a nearly constant irritant, his readings loud, flat, and very poorly synced with the visuals. As Arkadin's coveted daughter, Paola Mori (Welles' future wife) achieves only vacant prettiness in a role that demands the irresistible melancholy mystery of a Fitzgerald heroine. Others are quick to add Welles's performance to the list of atrocities, but, as usual, his acting gets an undue bad rap. The cards are stacked against him due to his ridiculous makeup job (his nose prosthetics glop at the edges) and absurd hair (his flat top and beard combine to make his head a perfect rectangle), but his cryptic delivery and monstrous mien exactly suit the role of this international arms dealer, traveler, storyteller, possible murderer, and all-around man of mystery. Knocking down Welles for ‚Äúhamming it up‚Äù misses the point of his baroquely stylized pulp stunts here‚Äîthe fun of which often lie in so-wrong-they're-right mash-ups, like the Viennese masquerade where all the masks are from Goya and revelers pound Russian vodka.

As much of what's in the movie‚Äîthe stridency of Arden, the Wellesian (duh) canted angles/deep focus, the disorienting cuts‚Äîpushes you away, other elements reveal a heart beyond the mangled frame. There are unforgettable, impossibly colorful bit roles by Michael Redgrave as a needling junkshop proprietor; Katina Paxinou as an ex-lover of Arkadin's, now pickling in feather boa-wrapped, Norma Desmond nostalgic steam; and especially Mischa Auer as the childlike ringleader of a flea circus (one able-legged flea gives a sporting performance of its own). All of these satellite figures sketch in the edges of Arkadin's mysterious grandeur, which, like Kane's, isn't meant to be fully known. Quiet moments like Kane's first visit to Susan's apartment are paralleled in Arkadin's gently arch stories, the most memorable of which is a fable involving a scorpion who convinced a frog to take him across the stream on his back; when he bites the frog midstream, drowning them both, he can only say: ‚ÄúThere's no logic to it. It's my character.‚Äù Later, Arkadin's desperate shouted pleas to a group of boarding passengers to sell him a ticket, continuing to beg even as he is anonymously mocked, mimic Kane's insistent opera house applause of denial.

By closing the book on this project, at least as far as the need for further DVD releases goes, Criterion has preserved the mystery with this exquisite set. Three great, flawed versions don't exactly combine to make a masterpiece, but the wholesale scope of everything Arkadin swells well outside of any number of texts, its wealth of intrigue surpassing the petty revelations of so many fully realized single films. There are worse things than blurring the line between preservation and geeky completism. In a word: admirable.