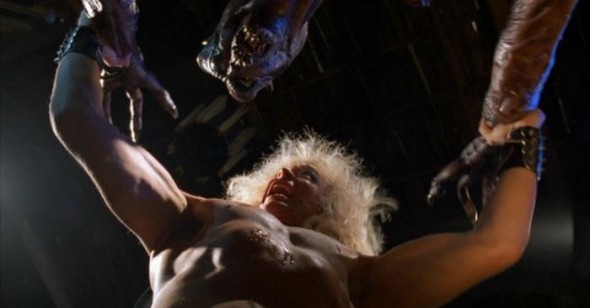 Pop-religious films get a bad rap. Everyone’s experienced the unadulterated glory of The Ten Commandments, but such enjoyable Technicolor carnivals are outnumbered by the likes of The Passion of the Christ, Yentl, and Little Buddha, productions reaching heights of preachiness that'd make Jimmy Swaggart's eyes roll. I attribute this mostly to the lack of what usually makes any feature-length film absorbing: gratuitous sex, drugs, cursing and, of course, rock n’ roll. That's why it’s so refreshing to encounter a movie like Rock ‘n’ Roll Nightmare, which spends approximately 75 minutes as a low-budget, poorly-constructed horror movie involving demonic possession and bloodshed, only to about-face into some sort of testament to the powers of a Heavenly Good within the last ten minutes.

The movie, released in 1987, follows a band of “metal” rockers as they head to the wilds of Ontario to catch up on the other R&R and finish what will be a truly horrendous record. Encountering some sort of demonic force within a two-story family house, they all proceed to have sex, drink soda, and get killed. Or possessed. Sometimes it’s hard to tell. Zany characters are the norm here, with the well-defined cast including a newlywed couple (Ontario is technically the honeymoon capital of the world), a geeky manager, a plethora of whorish groupies, and a drummer doing an Australian accent so fake it’s a relief when he inexplicably drops it about halfway through the movie. I run through this litany of characters quickly, because they pale in comparison to the film’s shining star: magical leading man Jon Mikil Thor. Thor, the originator of Gladiator Rock, is an amateur filmmaker and bodybuilder who not only headlines this delightful piece of celluloid but also wrote every damn song on the soundtrack. He’s talkin’ bout rock.

Thor and members of his fictitious band, the Tritonz (there’s a Z there. I checked), rock out with awe-inspiring rehearsals of such anthems as “We Live to Rock” and “Energy,” and lots of simulated shower sex, but things start to get kooky when pesky demons begin slipping into people’s bodies. With the introduction of several other unexplained creatures, each more bewildering than the last (including an oven monster, a wolf-boy, and some sort of sock puppet devils), Satan himself finally appears, and everyone gets killed.

Well, everyone except Mr. Jon Mikil Thor. Why you may ask? In a stunning plot twist, Jon Mikil Thor reveals himself to be… the archangel, Intercessor, ready to battle to the death to keep this one tract house safe for generations of future Canadians! You thought all of his band members, groupies and miscellaneous girlfriends were real? That was an ingenious mind trick he used to lure the Devil out into the open! And so begins a tense, extremely careful (it is a puppet) fight to the death between a heavily hair-sprayed, studded-codpiece-wearing Jon Mikil Thor and an Alien knockoff that looks in danger of disintegrating. Of course, Jon Mikil Thor wins—God gave us rock ‘n' roll, after all—and peace is finally restored. Or is it? In a bizarre and inexplicable closing shot of another seemingly innocent ranch-style house (this one in Toronto), we’re left with the tantalizing possibility of more wacky possessions. What if….?

No one can say that Rock ‘n’ Roll Nightmare is genius, not even the director and leading man in their commentary. Displaying what is quite possibly the poorest sound quality I have ever had the pleasure of hearing, the movie also contains amateur special effects, glacial pacing, and a plot that is only redeemed in the final confrontation between Thor and Satan. Oh, and also a set of “comedic” scenes that appear both confusing and jarring—why introduce one-eyed, smoking sock puppets three-quarters of the way through the film?

The DVD offers a treasure trove of extras, from commentary by director John Fasano and Jon Mikl Thor to Revelations of a Rock n Roll Warrior: The Life and History of Jon Mikl Thor, a 15-minute featurette that includes an incredibly awkward clip of Thor performing on the Merv Griffin Show and a taste of his previous movie, Recruits, a Police Academy rip-off. That’s right. There’s also a “Behind-the-Scenes” detailing the makeup creation of the Wolf-Boy, which shows the actual process of taping a real child’s head up, molding plaster to it and then making him stay still for a large chunk of time, a sequence more horrifying than anything in the movie.

The labor of love continues with an extensive sequence of “rare footage” from the set mostly involving cast and crew making goofy faces at the camera between shots and, finally, two delicious music videos for “Energy” and “We Live to Rock” that utilizes every single effect on that Betamax. All in all, it’s a neat little package of glorified, testosterone-ripened rock that concludes with a simple message to not be the Devil, otherwise a greased-up metal-head with bulging biceps will be coming for you. If anything, see it for the overwhelmingly tacked on Christian ending. Or because one fight scene involves Jon Mikil Thor being pelted by droves of clay octopi. In slow motion.