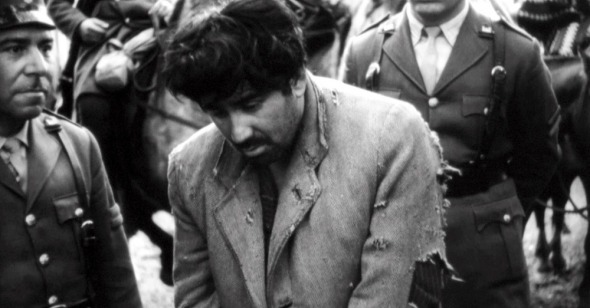 The Jackal of Nahueltoro is about six murders. Five of them take place during the film‚Äôs most troubling scene, as Jose, the protagonist, beats to death a recently fatherless family who have adopted him into their fold. The sixth murder is Jose‚Äôs execution at the hands of the Chilean state. That the film is able to ratchet up equal horror at the seemingly disparate killings and equal sympathy for their victims is a triumph of its sober, nondogmatic style, one that probes but never nudges.

See the family murder scene out of context and you might be skeptical that any amount of pitiable perpetrator back story or redemptive imprisonment could in any way quantify it. Horrifically bracing, Jose‚Äôs atrocity takes place under the vacant light of midday. In the spell of a drunken psychosis, Jose ends an argument with Rosa by chasing her (along with the camera, M-style) and thumping her to the ground with a piece of wood. Then, one by one, he bludgeons to death the children, most standing eerily, almost strategically far away from each other in this desert clearing in an unforgettable bit of blocking. Finally, in director Littin‚Äôs most brazen move, Jose wakes up from a drunk-nap (no doubt sobering), hears crying, and proceeds to crush the family baby under his boot.

It could be assumed that Littin‚Äôs choice to focus on this true and notorious murderer‚Äôs heinous crime is a way to illustrate capital punishment‚Äôs evils in even the most offensive circumstances. That‚Äôs true, but he‚Äôs at something a bit broader, namely an attack on the very government and populous that would rear (or fail to rear) a child like Jose and create a demon. The film‚Äôs thesis‚ÄĒthat killers like Jose are the natural breed of a poor, brutal upbringing and the responsibility of a corrupt society‚ÄĒis of a kind that would madden blindered ‚Äútake responsibility for your own actions‚ÄĚ conservatives. And the film doesn‚Äôt always display (it never argues) its case totally convincingly; the ‚ÄúTaming and Education‚ÄĚ segment feels a bit rushed, almost as if the sight of a shaved, pomaded Jose, smartly clad in a tweed blazer (if only he had on glasses!), was enough to convince us that this isn‚Äôt the same man who murdered five people. Otherwise Littin is able to show, with economic leanness, the irrefutable basis for killings like the Jackal‚Äôs in the societal and political framework of his Chile.

Considering that it‚Äôs ‚Äúthe most widely seen motion picture in Chile‚Äôs history‚ÄĚ (according to the National Gallery of Art USA), The Jackal of Nahueltoro is surprisingly radical in its use of a time-hopping narrative (cutting between Jose‚Äôs inquisition and scenes from his youth) and its genre-busting blurring between documentary and fiction film techniques. The same unsteady cam used in the first murder scene to add psychotic disorientation lends a snatched-from-the-newscasts v√©rit√© quality to the scenes that follow Jose‚Äôs arrest. As the sympathetic butcher, Nelson Villagra is never showy, his Steve Cochran/Colin Farrell-like bushy eyebrows and defeated gaze directed dirtward until his imprisonment teaches him dignity (along with the ability to read and fashion wooden guitars).

Ignoring the film‚Äôs perceived ‚Äúthemes‚ÄĚ and ‚Äúintentions,‚ÄĚ its power lies, as expected, in the grubby detail. Jose‚Äôs young adulthood is bleak, as black as the half jug of ambiguous liquor he receives in lieu of cash for some shirts he managed to steal off of a clothesline. His pathetic near-dawn stumbling across some foggy forgotten railroad tracks recall nothing so much as Henry Spencer‚Äôs lost journeys through wasteland Philadelphia in Eraserhead. Jose‚Äôs decadent, uncaring father is something of an agitprop caricature as he spreads his bread with expensive jam and blithely asks an officer to take away his son, but it‚Äôs balanced with the softer scenes of an adrift Jose navigating gutter after gutter following a succession of shit, servitude ‚Äújobs.‚ÄĚ

The actual execution scene is powerfully drawn out to highlight the government‚Äôs critical folly; the time, money, and energy inputted into the spectacle are the same resources unspent on the real issues that create problems in the first place. Rifles are fetishistically loaded and lined up, and the marksmen are instructed endlessly as to proper protocol. In between these rituals, you have to almost crane your neck or pause the DVD to catch what might be the film‚Äôs most human detail. As Jose‚Äôs priest and the guards go to summon him for his execution, he‚Äôs sitting on his cot reading a magazine. A close look reveals that the pictures in the magazine are light pornographic pinups of beautiful women. The prop choice seems a bit baffling and out of character for this redeemed man, especially at a point in the film that would seem strictly sanctimonious. Then you realize that Jose is not eyeballing the pictures as a middle-aged lecher, but as a curious pubescent teen born and grown into a young, full man, and murdered, only weeks into his life.