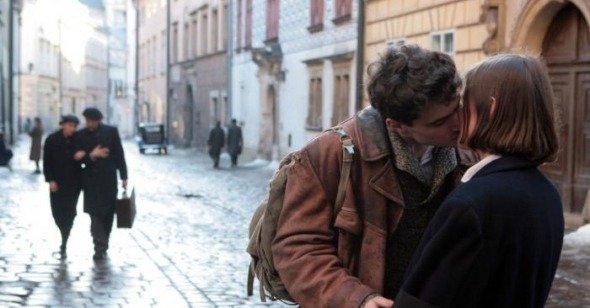 Fifty years after creating the first cinematic account of the Warsaw uprising with Kanal‚Äîa classic that put Polish cinema on the international map‚Äîoctogenarian master Andrzej Wajda offers Katyn, the first film about another WWII tragedy. Named for the wooded Soviet region where 15,000 Polish officers were executed by Stalin‚Äôs Red Army, Katyn strives to bring clarity to an event long (and deliberately) cloaked in mystery. During a half-century of Soviet occupation and influence, official accounts of Katyn put the blame on Nazi Germany (after signing the Molotov-Ribbentrop pact in 1939, but before the Nazi invasion of the Soviet Union in 1941, the Nazis and Soviets basically divvied up and imprisoned the Polish military). By the time Mikhail Gorbachev and later Boris Yeltsin admitted Soviet culpability, the truth of Katyn was an open secret. Wajda‚Äôs film ambitiously covers the events both preceding and surrounding the massacre, as well as the spiritual costs of forsaken truths on postwar Poland.

From an opening scene of itinerant citizens stranded and bewildered on a bridge, Katyn privileges representational over individuated drama. Though a woman and her daughter quickly emerge as focal points in the crowd and ensuing narrative, every moment they are on screen reinforces their narrative function: they are the loving family of a captured Army captain. Anna (Maja Ostaszewska) journeys from Krakow to Warsaw in hopes of persuading her husband, Andrzej (Artur Zmijewski), to abandon his post and escape captivity, but he declines out of a sense of honor and duty. Transported to Russian soil, Andrzej nobly awaits his fate alongside his fellow officers, keeping detailed notes addressed to Anna while Anna waits futilely for his return to Poland. Andrzej scans as virtuous and resilient while Anna is anxious and incomplete without Andrzej. He is the best and brightest, the martyred; she is Poland‚Äôs broken heart.

Weighted by historical import and its attendant expectations, Katyn is a monument of a movie: impressively made, suitably grave and lifeless. Lacking full characters or a workable dramatic thread, Wajda constructs a blocky, episodic soap opera, summoning melodramatics to stand in for drama and giving actors emotive face time to compensate for lack of characterization. All Polish soldiers appear decent, steely, and Catholic, while their women are uniformly loyal, consumed with the safety and whereabouts of their men, ever keeping oceans of tears in check. Characters vanish once their illustrative purpose has been achieved. Wajda can still orchestrate scenes with subtle mastery, moving the camera to triangulate subjects for varying effect, guiding naturalism to moments of vivid physicality, and sticking with an overt arrangement until it achieves poetry (such as a shot of officers imprisoned in a repurposed church, gathered around their bunks in the shape of a cross, the camera craning up to underline their divinity before descending back to humble earth). His visual language even bridges the heated theatrics with cool representational remove; yet he‚Äôs ultimately failed by the story.

Determined to dramatize the executions last, to leave viewers stricken by the unfathomable facts of cold-blooded, systematic murder, and to place, once and for all, Stalin‚Äôs army at the scene of the crime and at the precipice of mass graves, Wajda and screenwriters Wladyslaw Pasikowski and Przemyslaw Nowakowski leave much of the film stranded in misplaced notions of compliance and resistance. No doubt some Poles actively spoke out against the whitewashing of Katyn and the shifting of guilt to the Nazis, refusing, as Katyn depicts, to sign false statements or to voice anything but the truth about who was responsible. But by placing too much emphasis on these small acts of postwar opposition and contrasting them too starkly with those passively resigned to the injustice, the film creates a false dichotomy, absurdly articulated by two deaths: a headstrong young man, son of a Katyn victim, is heroically killed after vandalizing Soviet propaganda; and a surviving officer commits suicide rather than serve a Polish People‚Äôs Army that denies the true fate of his friends. Life-is-for-the-living sentiments are meekly, guiltily expressed while historically accurate gravestones are given rebellious heft.

These scenes may well express the importance of the Katyn massacre‚Äîsymbolically, historically, emotionally‚Äîto the Polish mind. But they suggest a moral choice where it didn‚Äôt exist, forcing heroics on the victims of tragic, mass, ritualized slaughter. Wajda, whose own father perished at Katyn, can take that liberty, but it‚Äôs a curious development for the director of Kanal. Working within the same communist government that his Katyn heroes can‚Äôt countenance, Wajda‚Äôs 1957 film managed to question the wisdom and execution of the Polish uprising, refused to depict combatants as saints or of any type, and even alluding‚Äîflying well under the radar of censors - to the Red Army‚Äôs role in the uprising‚Äôs bloody defeat. It stands to reason that Wajda knew better than to risk his life berating an implacable, despotic system for a guilt admission that wasn‚Äôt coming. The world is a better place now that the truth of Katyn is known, and now that the flawed but functional Katyn can make it more popularly known; it‚Äôs also a better place for Wajda having lived to tell the tale.