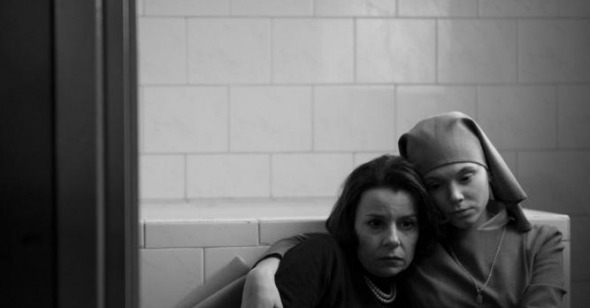 Keeping the Faith
By Hans Morgenstern

Though PaweŇā Pawlikowski left Communist-era Poland as a teenager, his connection to the former socialist republic remains profound. After moving to western Europe and eventually settling in England, he began making films in the late 1980s, producing several award-winning documentaries focusing on Eastern European culture, providing ironic, sometimes surreal commentary on such subjects as epic Serbian poetry and Dostoevsky. He eased into fiction filmmaking in 1998 with Twockers, a hybrid documentary/fiction short about teenage car thieves falling in love in Yorkshire. His breakthrough film arrived with 2000‚Äôs Last Resort, featuring English actor Paddy Considine as a man involved in a tumultuous engagement with a Russian √©migr√©. In 2004, he adapted Yorkshire-based novelist Helen Cross‚Äôs hit novel My Summer of Love, starring a then-unknown Emily Blunt. Despite its concern with social class divisions, the film further distanced him from his roots. After seven years, he returned with his long-awaited follow-up, an adaptation of Douglas Kennedy‚Äôs novel The Woman in the Fifth, a suspense film situated in Paris starring Ethan Hawke and Kristin Scott Thomas that failed to move critics or audiences.

His new film, Ida, feels like a career reboot. Pawlikowski‚Äôs first feature in black-and-white, Ida also marks the first time he has shot in his native Poland, using Polish actors speaking in Polish. He also has written his first original script, with cowriter Rebecca Lenkiewicz, and, rather than standby cinematographer Ryszard Lenczewski, he has placed his faith in newcomer Lukasz Zal, who took over when Lenczewski dropped out. Also unusually, star actors are nowhere to be found and the lead is played by a nonprofessional, Agata Trzebuchowska, who was discovered in a Warsaw caf√©. He taps into the raw talent of both Zal and Trzebuchowska to beautiful effect throughout the film.

To evoke his film‚Äôs early 1960s, Soviet-era Poland setting, Pawlikowski not only shot Ida in black-and-white but also used the 4:3 academy aspect ratio, recalling such Eastern European classics of the era like Loves of a Blonde and Closely Watched Trains. Ida opens with an unusual medium shot featuring 18-year-old novitiate nun Ida (Trzebuchowska) from the shoulders up, in the corner of the frame. The other three quarters of the image are filled with background, a void (a visual choice that will recur throughout the film). She seems absorbed in her task of touching up a Christ statue with a paintbrush, her deep black eyes wide and focused. With a jump cut to a wider shot, it becomes clear that she is inside a modest monastery. We soon learn she grew up there, taken in after her parents were killed during the Nazi occupation. She‚Äôs now on the verge of taking her vows. But before she does, the mother superior sits her down and tells her she needs to meet her only living relative, an aunt named Wanda Gruz (veteran Polish actress Agata Kulesza). When she arrives at Wanda‚Äôs apartment, Ida finds a woman of compromised morals. Wanda greets Ida in a silk robe, smoking a cigarette. Down the hall, in Wanda‚Äôs bedroom, a half-dressed man slips on some boots. Wanda seems to have known this day would arrive, and she sits Ida down at the kitchen table and asks, ‚ÄúSo you are a Jewish nun?‚ÄĚ It‚Äôs a casually tossed-off revelation by a bulldozer of a woman whose job throughout the film will be to upend whatever long-standing beliefs Ida has accumulated on her path to serving God.

A quick scene after their meeting reveals Wanda as a judge; we see her presiding over a trial to condemn ‚Äúanti-socialist‚ÄĚ activity involving a man accused of hacking down a bed of tulips ‚Äúplanted by socialist scouts.‚ÄĚ A stern-faced Wanda listens to the prosecutor detail that the crime was committed by the accused with a saber inherited from his grandfather, ‚Äúa member of PiŇāsudski‚Äôs legions,‚ÄĚ a reference to a Polish national hero, who, during this time of socialist rule, had been regarded as irrelevant. Later she‚Äôll tell Ida how, earlier in her career as a prosecutor, she came to be known as ‚ÄúRed Wanda,‚ÄĚ famous for having ordered the executions of ‚Äúenemies of the people.‚ÄĚ There‚Äôs a profound difference between these women. One serves a Christian God, the other serves a political ideology. As the film progresses, each woman‚Äôs beliefs will waver. One will see a way out; the other will not. In a smart bit of casting, Pawlikowski pits a professional against a non-actor, but you cannot really tell which is which. A powerful personality to rattle Ida‚Äôs faith, Wanda is vibrant and ferocious. She puffs cigarettes forcefully, exhaling in tight-lipped streams of smoke aimed down instead of skyward, as if she is spitting on the ground she walks on. She has lost much and has little to care about. Ida, meanwhile, has a quiet stoicism, silently conveying surprise, pain, dread, pensiveness, and wisdom, playing off against Wanda‚Äôs boisterous frankness. Kulesza delivers her shocking lines with provocative casualness, and Trzebuchowska reacts in repressed, sometimes confused contemplation. When Wanda offers to help Ida find the unmarked graves of her parents in a rural part of Poland, she asks her, ‚ÄúWhat if you go there and find there is no God?‚ÄĚ Ida says nothing. ‚ÄúI know . . . God is everywhere,‚ÄĚ answers Wanda with a smile.

It‚Äôs a variation on many exchanges the pair will share: Wanda‚Äôs cynicism against Ida‚Äôs naivet√©. At the start of their trip, Wanda tests Ida for limits and cracks in her faith, asking whether she has ever had thoughts about ‚Äúcarnal love.‚ÄĚ Ida looks out the car window and flashes a smile but answers in the negative. Wanda then says, ‚ÄúWhat a shame. You should try . . . otherwise what sacrifice are these vows of yours?‚ÄĚ Moments like these gradually come to reveal Ida‚Äôs fallibility; she is en route to a reckoning with her own faith.

Ida unfolds poetically, somberly; its score by Kristian Selin Eidnes Andersen, often an ethereal ambient drone, is used sparely. Yet there is a bit of lively music, thanks to a hitchhiking saxophonist the women pick up. Wanda decides they should stay at the hotel where he will play his gig. While Ida prays and tries to sleep upstairs, Wanda goes to drink, dance, and flirt. When Wanda staggers in and crashes on her bed, Ida sneaks down. The dining room dance hall is empty except for a janitor and the backing band playing a breezy rendition of Coltrane's ‚ÄúNaima.‚ÄĚ She leans against a pillar and watches for a bit until the hitchhiker comes over to her for a chat, trying some polite seduction. She remains unwavering. The next night they have a slightly more tender moment outside; he stands close, his elbow lightly touching hers as she leans on a railing, her arms crossed. Again she never flinches. He first follows up on how the search goes and then asks if she is sure a nun‚Äôs path is her true calling. The possibility of compromising her ideals here seems much more seductive than it does via Wanda‚Äôs cynicism.

Even during such intimate scenes, the camera never feels intrusive. Though there is a wonderful exploratory daring to Zal‚Äôs shots‚ÄĒwhich can surprise and sometimes even overwhelm the film‚Äôs quietly developing plot‚ÄĒthe camera is often static. The film‚Äôs pace is not set by camera or lens movement but by editor Jaroslaw Kaminski, who gives each scene enough space to invite the audience‚Äôs contemplation. During one sequence, Ida paces outside an apartment building while Wanda breaks into a unit inside. Shot from around the corner in a high angle, the building trails off steeply toward the horizon, like the edifices in a de Chirico painting. During several exterior shots, a mist lingers over the rural landscape, one of many ethereal elements, like smoke, fog, or clouds, that figuratively reinforce the oppression the film‚Äôs characters, often presented at the bottom of the frame, live under. Such atmospheric compositions are heightened by the film‚Äôs monochromatic quality, lending them an unreal weight, as though the women are burdened with a shroud they must lift to confront their pasts and come to terms with their beliefs.

Representing two opposite poles of socialist-era Poland, Wanda and Ida are symbolic of the disillusionment created by the broken promise of Communism. Instead of once hoped-for utopia, what looms on the horizon is the blossoming of the 1960s. Underneath these historical gestures is the more intimate story of the title character‚Äôs personal growth, which resonates more clearly as the film progresses. Questioning her own faith is but one part of Ida‚Äôs blossoming into a complex adult. When, at one point, Ida removes her religious garb for a carnal romp, it is not the end of her journey. The conclusion is ambiguous; the audience is left to decide who Ida becomes.