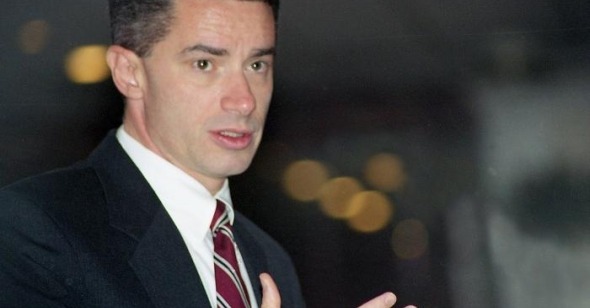 Come Out, Come Out, Wherever You Are
By Eric Hynes

A quintessential work of muckraking journalism outfitted as a mainstream talking-head documentary, Outrage doesn‚Äôt lack for nerve. While most of the film's claims were first reported elsewhere, director Kirby Dick effectively consolidates and champions the grassroots reportage that mainline media habitually ignore, and thus, through the modest power of film distribution, makes further ignorance impossible. Information long relegated to the blogosphere or alternative presses, once deemed irrelevant, indecent, or not newsworthy will suddenly appear, of all places, in a movie review. Covering Outrage, whether for the New York Times, Washington Post, or an otherwise timid local outlet, will mean divulging its revelations. Kirby Dick‚Äôs new film alleges that Florida Governor Charlie Crist is a closeted homosexual will be written, from a hands-clean remove, and presto‚ÄĒit‚Äôs news, finally. Dick‚Äôs dirty work may unsettle some, but he‚Äôs digging for truth, and truth is always worth the mess.

Speculative, a bit short on psychology, and somewhat tenuous in justification, Outrage nevertheless manages to be an effective and essential work of advocacy, honest about its limitations but propelled by conviction and righteous anger. Too many liberal issue docs neuter themselves by either taking a hysterical, the sky-is-falling stance or by chummily preaching to the choir, and though Outrage gives in to these tendencies it triumphs by making a strong argument and gathering evidence to support it. Outrage has an agenda, as well it should. Without it the film would be nothing but gossip, a salacious peek into the private lives of public figures. Furthermore, Outrage‚Äôs agenda sells rather than corrupts the film‚Äôs truths. Not outing people for the hell of it, Dick is naming those politicians whose damaging, disenfranchising hypocrisy begs for an act of reckoning. These are officials who vote, time and again, against equal rights for homosexuals.

Which doesn't make outing, even of this sort, free of controversy. Dan Gurley, whose gay-bating work for the RNC led to his unwilling outing, calls the method ‚Äúfundamentally wrong‚ÄĚ and ‚Äúa dishonest thing to do.‚ÄĚ (The film acknowledges this point of view, but doesn‚Äôt bother investigating the theoretical possibility that some of these ‚Äúantigay‚ÄĚ votes were cast with conviction). Yet intimations that Dick‚Äôs practice is tantamount to witch-hunting and McCarthyism only go so far, especially since those were campaigns of lies and half-truths that promoted rather than fought ideologies of fear and intolerance, and those doing the outing intend to defeat rather than enforce ostracism. Dick takes a particular moral position and never apologizes for it. You can question his methods or decisions, but you always know where he‚Äôs coming from. His process might resemble the spirited clubbing of a fatted pi√Īata, but no one‚Äôs wearing a blindfold.

Dick‚Äôs biggest slip comes at the top, when a title card foolishly overstates his thesis. Calling the closet of gay politicians a ‚Äúbrilliantly orchestrated conspiracy‚ÄĚ by a ‚Äútyranny‚ÄĚ of hate, he threatens to alienate anyone in possession of a working bullshit detector. This is a mode of discourse that jumped the shark over a decade ago, first when Hillary Clinton accurately but disastrously cited ‚Äúa vast right-wing conspiracy‚ÄĚ to defend her philandering husband‚Äôs honor on the Today Show, then when certain paranoid/Chomsky-drunk leftists proved incapable of expressing dismay over 9/11, and finally when the neocons borrowed the language of nefarious webs of evil for the right. (As a little game, why don‚Äôt we refrain from coupling ‚Äúorchestrated‚ÄĚ with ‚Äúconspiracy,‚ÄĚ and find another word altogether for the latter? At least until the Masons or the Jews or the Japanese really take over.) In the meantime, we‚Äôll have to forgive Kirby Dick this hyperbole because the rest of Outrage‚ÄĒoutside of a monster movie score‚ÄĒis admirably restrained. While homophobia isn‚Äôt a web of dastardly deceit to be discovered, decoded, and foiled as in a Bourne thriller, Dick and his heroic proxy in the gay press‚ÄĒpeople like BlogActive‚Äôs Michael Rogers, the Washington Blade‚Äôs Kevin Naff and Out Q‚Äôs Michaelangelo Signorile‚ÄĒdo expose the tacit understanding between some on the right to keep each other‚Äôs secrets, and thus their hypocritical governance, safe. On this front Outrage has identified a productive line of attack. When closeted gay (mostly) male political representatives enact or vote for antigay legislation, Dick‚Äôs gloves, and the closet doors, come off. As out Massachusetts Congressman Barney Frank says in the film, ‚ÄúThey have a right to privacy, but not to hypocrisy.‚ÄĚ

Dick‚Äôs previous expos√©, This Film Is Not Yet Rated, entailed a gonzo undercover component‚ÄĒinfiltrating private property and closed-door meetings under false pretense‚ÄĒmissing from his latest film. But what Outrage lacks in spycam drama it makes up for in relevance. These aren‚Äôt private citizens serving on a movie ratings board, these are senators, congressmen, governors, and mayors: Charlie Crist, a potential 2012 presidential candidate who vehemently and unconstitutionally opposes gay adoption; former New York Mayor Ed Koch, a Democrat who the film alleges largely ignored the crisis of AIDS in his city; Larry Craig, who after being caught soliciting gay sex still insists on his heterosexuality, and still vehemently votes against gay rights measures; former Arizona Congressman Jim Kolbe who came out only after his support for the Defense of Marriage Act spurred the Advocate to out him. There are also countless aides and advisors who help to author intolerant speech and legislation. All are out-worthy, and all get a serving of unsavory proof. The witnesses and evidence brought forth are a mixed bag of first-person kiss-and-tell, phone sex voice recognition, silhouette hoarse whispers, deathbed confessions, and carefully coded secrets. The most delicious, if least legally substantial testimony comes via a ‚Äúno comment‚ÄĚ from one of Crist‚Äôs ex-girlfriends. ‚ÄúCall me in ten years,‚ÄĚ she says, ‚Äúand I‚Äôll tell you a story.‚ÄĚ (The least delicious, in that it‚Äôs the one outing that falls well afoul of Dick‚Äôs criterion, is an anecdote about the cruising habits of Fox anchorman Shepard Smith.)

The thinking goes that once they‚Äôre outed, politicians not only feel an incredible sense of relief but also develop into pro-gay legislators and gay-rights advocates. The supporting testimonials put forth by Outrage are compelling and persuasive, but it‚Äôs a gay positive spin on a thorny predicament. It‚Äôs not just self-hatred that fuels this brand of duplicity but also self-interest. For some, the emotional and psychological benefits of being out are overshadowed by certain opportunities only afforded to the seemingly straight. Count brokering power in the Republican Party among those opportunities. Count presidential candidacy as well. Even count Hollywood superstardom. As Harvey Milk and the Atlantic‚Äôs Andrew Sullivan beautifully state in Outrage, such inequalities would vanish if everyone who‚Äôs gay simply came out of the closet. But until that day, some opportunity costs will remain too much for some men and women to pay.

Each of Outrage‚Äôs subjects could support a documentary of his own‚ÄĒKoch, Crist, but none more so than former New Jersey Governor Jim McGreevey. Thoughtful, voluble, and unrestrained, he‚Äôs also a slam-dunk interview. Dick wisely reaches for McGreevey both early and late, and his parting words on the political suitability of closet cases offer the wisest, if seemingly simplest observation in the film. A life in the closet, he says, ‚Äúgives you the skills of a politician.‚ÄĚ Learning to present oneself carefully and strategically, to alternate masks of public and private selves, to anticipate what others want from you and to convincingly perform it‚ÄĒperhaps even believe it‚ÄĒis the best training for a career in politics. It‚Äôs the kind of thought that merits more screen time, but doing so would slacken Dick‚Äôs pace and perhaps dull his documentary‚Äôs edge. Sitting with the thought can lead to feelings of such empathy that political matters start to seem beside the point. They‚Äôre not, of course, and Dick is right to fashion a film that can effect the most immediate change in American politics and cultural discourse. He even makes a strong case for the consequences of intolerant leadership, tracing hate crimes back to hateful comments by elected officials and clergymen. Yet I still walked away most moved by McGreevey‚Äôs vision of promising young men so fearful of the consequences of being themselves that they learn to reflect and enhance, with shocking brilliance, society‚Äôs intolerance. Until we can manage a society that doesn‚Äôt encourage such fear and self-loathing, we‚Äôre fighting effects and not the cause. Yet by giving voice to the complex reality behind hypocrisy, and by exuding sympathy even while it doles out shame, Outrage takes an important step in that direction.