The Opening of Misty Beethoven 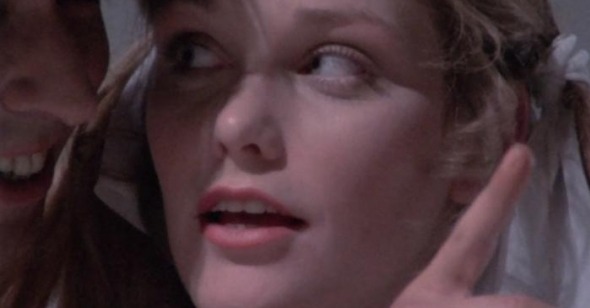 Perhaps the only drawback of The Opening of Misty Beethoven is that hardcore pornography and quality cinema just don’t smoothly mesh. This may be the dormant Catholic in me unexpectedly reemerging, but I can’t imagine anything more disgusting than extreme close-ups of the genitalia of folks from the seventies (a more hirsute era), and I still give thanks that I saw them on DVD and not larger than life on the silver screen. Even the least prudish among us must admit that a few minutes of people pounding away on each other kills any previously achieved narrative drive. As these couplings continually ground the story to a halt, I often found myself thinking, “Why the hell is this here?”

There is some undeniable talent on display in Misty Beethoven. While it features its share of the lame puns porn thrives on—my personal favorite remains the title All That Jizz—even those are of an oddly highbrow bent (“The play’s the thing to catch the hard-on of a king”). The film takes place in New York, Paris, and Rome, and they actually shot much of it on location, something even legitimate films rarely do anymore. Cinematographer “Robert Rochester” (like Metzger, he was a fan of pseudonyms) offers a marvelous tracking sequence which follows Seymour as he jogs around his Italian estate, drinking while observing servants everywhere engaged in sex acts (the movie suggests that “sophisticated” life consists of nothing but alcohol and blowjobs). Even the down-and-dirty scenes have stylish touches. During the film’s opening at the movie theater Metzger intercuts rapidly between two separate sex scenes as they build to the big finale. Most unexpectedly, attention has actually been paid to the script: there’s a wonderful moment when, while driving through the countryside with Seymour, Misty asks, “What’s the biggest difference between New York and Rome?” and he replies, “There aren’t as many Italians in Rome”—it feels like an outtake from a Woody Allen blue movie. It’s been alleged that Metzger was the inspiration for Burt Reynolds’s Jack Horner character from Boogie Nights, but if that’s true Paul Thomas Anderson does him an injustice. A successful maker of softcore films before switching over to the hard stuff, Metzger directed twenty-one pictures over a two decade-plus career. Unlike Horner (a hack desperately trying to delude himself into believing he’s creating art), Metzger deserves to be regarded in much the same way as Russ Meyer: an always competent and occasionally exciting filmmaker who saw fit to limit his work to a genre that most people automatically dismiss.

Two sequences in The Opening of Misty Beethoven are simply unforgettable. The first occurs following Misty’s first major “triumph”—a jubilant Seymour and his companions celebrate before heading out, leaving behind Misty. In a single take, Misty silently scans in the empty room before going into the corner, covering her eyes, and beginning to weep. It’s an undeniably touching scene, in its own strange way as affecting as the embrace in East of Eden when a sobbing James Dean hugs a father who doesn’t respond to him at all. Misty’s moment, however, appends the pleasuring of three servants simultaneously and includes a shot of her discreetly wiping her hands off with a towel.

The second occurs at the movie’s end, when Misty returns to Seymour. He sits forlornly watching a training film he shot of her learning how to perform sex acts properly, while a succession of maids attempt to knock him out of his funk through fellatio (they know what works). He’s so transfixed by the memory of Misty that he doesn’t even notice when the domestics leave and the genuine article quietly enters and starts servicing him. Realizing she’s returned, he begins to critique the film, until finally Misty lets him know he’s gone too far. The movie ends with Misty in control of Seymour—we know this because she’s dressed like a businesswoman, while he’s in bondage gear—and he’s perfectly content with the new arrangement (it’s worth noting this film supplies a more progressive conclusion than My Fair Lady, which closes with Henry Higgins instructing Eliza to find his slippers). I suppose the highest praise I can offer is that when Misty ended my girlfriend turned to me and said, “I can’t believe I’m saying this, but I kind of liked that.” The Opening of Misty Beethoven is well worth a watch, if only because we’ll never see anything like it again.