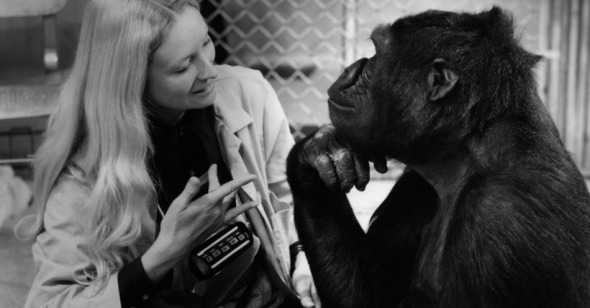 I made a solemn vow five minutes into watching Koko: A Talking Gorilla for the first time, which went something like: “Any time I am having a bad day or start to feel blue in the slightest, I will pop on this DVD to help me remember that life is a curious and wonderful gift.” A modest testament to humanity’s divine relationship with the rest of the animal kingdom, Koko plays like an eloquent hymn to communication, tolerance, and understanding, sung con amore Sunday morning at the Church of Darwin.

Most everyone remembers Koko as the majestic gorilla who, during the Seventies and Eighties, learned American Sign Language and kept pet kittens. As this film begins, Koko’s friend/teacher, Dr. Francine “Penny” Patterson and two other researchers explain the process of teaching apes to sign, that, when lacking certain vocabulary words, they create new compound words to get their point across. Thus, “watermelon” becomes “candy drink” or “drink food,” and “ring” becomes “finger bracelet.” Watching Koko and Penny sign throughout the film is so entrancing that, if I didn’t know better, I’d call it “hand dancing.” From the first scene, which depicts in medium and close-up shots our primitive protagonist using a ViewMaster as a learning tool, it’s obvious this is not standard, dryly informative Discovery Channel fare. The tenderness of Penny’s voice and the close quarters in which cinematographer Nestor Almendros shoots, reveal a certain level of trust already achieved between the subjects and the filmmakers.

However, to refer to Koko and Penny as “subjects” rings false. The pair have such star quality and charisma, not to mention a delightful on-screen rapport, that the film, at times, hovers more closely to madcap-comedy-with-spotlight-on-animal-antics (à la Bringing Up Baby) than to documentary. In fact, it’s both. The scene where Penny drives a carful of gorillas down a California strip as if taking her family out cruising on a Sunday afternoon seems straight out of your typical wacky, yet anthropologically informed, Charlie Kaufman script. However, director Barbet Schroeder’s voice over during this scene hints at some of the underlying issues touched upon during the film, particularly the possible adverse effects of teaching a gorilla to be more human.

Like E.T., Pinocchio, or one of Wim Wenders’s fallen angels, Koko is an outsider assimilating to the alien society of humans. A question hangs in the air towards the end of the film: maybe Koko wasn’t meant to fit in with us. If Koko is taken under the wing of this WASP female who treats her like her adoptive daughter, maybe she will be ostracized from gorilla society, and therefore unable to breed. The blond-haired, blue-eyed baby doll that Koko holds so lovingly to her chest certainly looks more closely related to Penny than to Koko. Serendipitously, the simultaneous presence of Penny and Koko onscreen serves to emphasize their polarized backgrounds. Koko’s dark figure hunches, broods and shoots sultry stares into the camera (a rather didactic essay by Marguerite Duras included in the DVD booklet calls Koko the embodiment of Africa), while her human counterpart, all snow-white skin and cornsilk hair, could be seen as the personification of the American Midwest, where she grew up.

Koko, like other learned apes, is able to recognize herself in the mirror and alter her appearance as she sees fit. As Penny teaches Koko to apply eye makeup and powder her face, one almost gets the impression that Koko is Penny’s baby doll. Koko’s progress in acquiring words and mimicking adult humans is continually compared to that of a human infant, and, as a large portion of the film becomes a pedagogical study, reflections upon how, and what, we teach our children are inevitable.

Several scenes have a near voyeuristic quality, with the bond between Penny and Koko so close as to suggest intimate familial interactions. “Koko has grown up with me as her mother,” says Penny during an interview. Saul Kitchener, the owner of the zoo from which Penny, in a sense, “sprung” Koko (technically, Koko was not supposed to stay away from the zoo so long, and this documentary was made without the zoo’s permission) is the major voice of dissent, stating, “A gorilla is not a person…you can’t impose our value judgments on a gorilla.” Dr. Roger Fouts suggests that the answer may lie more in acceptance and tolerance than imposition of values. “Maybe we’re not separate from nature…if you’re a part of nature, then you have to start perceiving it in a different fashion.”

Why is it that seeing a gorilla in the process of learning to communicate with humans is so spiritual? As Schroeder says in the interview included on this DVD, on a philosophical level Koko raises the question of what it means to be human. Perhaps in a world where intolerance and misunderstanding between different cultures but within the same race—human—is the modus operandi, there could be no more blunt a reminder of our folly than seeing how caringly Penny deals with Koko when she gets frustrated or upset, often when she’s not immediately understood. Koko is the antithesis of Alejandro Gonzalez Inarritu’s Babel, the trailer of which, a grim depiction of violence and constant misunderstandings, ends with a cacophony of languages blending together in nonsense. With Koko, Schroeder, a French and English-speaking Iranian, proves that, with a little patience and understanding, even inter-species communication is possible.