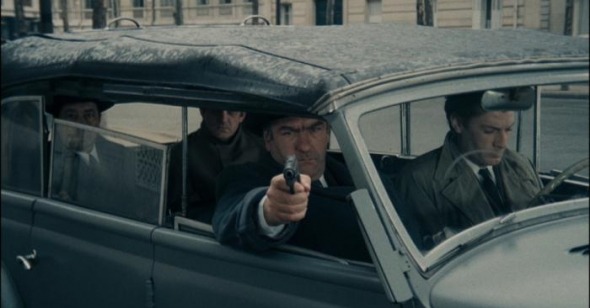 Grace Under Pressure
By Dan Callahan

Late Jean-Pierre Melville films are peopled by cloak-and-dagger men in stylish overcoats dedicated to a stringent, often opaque code of honor. Melville‚Äôs tough-guy mannerisms in movies like Le Doulos, Le Samourai, and Le Cercle rouge always strike me as impenetrable and faintly ridiculous, even though I admire the films‚Äô visual elegance and deadpan noir rhythms. In 1969‚Äôs Army of Shadows, which is currently getting its first release here in the States, this strange late style of his is joined to a large, serious subject (the French Resistance), and the fit is miraculous. Indeed, the story of the Resistance inspires Melville to great heights, and it makes most of his other work look like finger exercises (it could be an epic continuation of his rare, lyrical first film, from 1949, Le Silence de le mer). It‚Äôs no mistake that it was a highly personal, even obsessive project for Melville, who held onto the idea of making a movie of Joseph Kessel‚Äôs book for 25 years. Painting on a huge canvas and working mainly through vignettes that build tension in daringly languorous long takes, Melville creates a stinging look at what Nazism did to man‚Äôs collective psyche.

Thankfully, the ubiquitous Nazis are treated as an abstraction from the first spine-tingly long shot, a German march past the Arc de Triomphe. Reaction to these brutes shapes the lives of the many characters in Army of Shadows, all of them played by French actors with extremely photogenic faces. At the film‚Äôs center is Lino Ventura‚Äôs Philippe Gerbier, a man who has a gift for surviving desperate circumstances. We first see Gerbier being driven to a concentration camp. Melville used an actual run-down camp, and he sees a deadly beauty in it, filming it in eerie, nocturnal blues that make it look like a sleeping beast. Right from the beginning, Melville takes a visual subject that has been endlessly decimated as a sickly chamber of horrors and subtly evokes it by only suggesting its purposes. In the camp, Gerbier says, ‚ÄúThe score will be settled,‚ÄĚ thinking that he and others like him will put the Nazis in their place soon enough. He doesn‚Äôt realize yet that scores can never be settled with Nazis; they created a whole new set of bendable rules and wretched options.

Melville does nothing obvious in Army of Shadows. When he hits upon a poignant visual like a hat that falls off the head of a Resistance fighter as he‚Äôs being arrested, Melville doesn‚Äôt hold the long shot of the hat in the street, as most sentimental directors would. Instead, he cuts in a brutally quick close-up of the hat, visually expressing the thug-like jolt of Nazi destructiveness. To prove our interconnectedness, Melville gently creates parallels between people and objects (after that close-up of the hat, he cuts to Gerbier, who places his hat on a suitcase as a kind of afterthought, a slightly psychic allusion). After Gerbier knifes a Nazi guard in the neck and escapes from the Gestapo (a scene that is prolonged well past the breaking point of an audience‚Äôs nerves), he kills time by getting a shave (from Serge Reggiani). The connection between the knife in the guard‚Äôs throat and the razor blade at Gerbier‚Äôs neck isn‚Äôt stressed‚ÄĒMelville‚Äôs sense of humor is too dry for that.

Melville doesn‚Äôt linger on heroics. He unflinchingly films Gerbier and his Resistance fighters as they kill one of their own, Dounat (Alain Libolt), a young man who has betrayed them. Dounat does not struggle, does not plead for his life; he knows what he did was wrong, and all he can do is wait for the inevitable. Claude Mann‚Äôs Le Masque, with his long, sensitive face, hasn‚Äôt the stomach for the killing, but Gerbier keeps to his plan. The scene stretches on remorselessly, as they argue quietly about methods of killing Dounat, while a little girl sings sweetly next door. There‚Äôs something gruesomely tender, almost sensual, in the way Dounat whimpers weakly as they gag and strangle him. When he is dead, Melville shows you his tear-stained, youthful, lifeless face as an emblem of the film‚Äôs mournful point of view. (Later on, as Gerbier marches to a firing squad, he remembers this face, as we do.)

‚ÄúThe war will be over when the French can see this movie,‚ÄĚ says Gerbier, on assignment in London, after watching Gone with the Wind. Gallic cinephilia is one straw to grasp against Nazism. Another is women. In one scene, Gerbier watches girls dance to swing music, looking at them the way Sam Jaffe looked at the girl in the juke joint at the end of John Huston‚Äôs The Asphalt Jungle, with impotent wonder as the darkness closes in. This sign of hope is intensified by the powerful presence of Simone Signoret, whose earth-mother Mathilde is the boldest of the Resistance fighters. Melville uses Signoret‚Äôs iconographic status to his advantage, especially the contrast of her slim, lovely legs and gone-to-seed figure.

Melville doesn‚Äôt need to sketch in pointless little ‚Äúdetails‚ÄĚ about Mathilde‚Äôs character, and the same holds true for the rest of the cast. His actors bring with them everything you need to know about them in the way they look and move. Though the loose thread of the narrative feels novelistic, this is pure cinema. It plays with a sense of time passing, and each scene has a mysterious, uneasy kind of duration‚ÄĒcall it existential suspense. When the film is finished, it‚Äôs as if your own sense of time has been stretched and enriched.

Melville films life in the way that Antonioni and Bresson did, capturing idle, empty moments, even in sequences of high tension. And this technique adds to the weight of the big moments. Towards the end, Gerbier is completely emasculated by a Nazi who wanted to see him run for his life. Sensing this, Mathilde simply puts her hand on his. Signoret obliterates Nazism (momentarily) with this one simple gesture‚ÄĒI can think of no other actress who would have had the full authority for this scene. The Nazis have ruined Gerbier‚Äôs sense of manhood, and Signoret‚Äôs Mathilde restores it in an instant.

But her old-world generosity marks her for destruction in this new-world order. Mathilde carries a photo of her daughter, and Gerbier tells her to get rid of it, says it is madness to keep it. Surely Mathilde must know this, but she insists on life, and she won‚Äôt be parted from what she cherishes most, even if Nazism turns her deepest feeling into a deep perversity. Though her widely spaced green cat eyes have seen a lot, Signoret‚Äôs Mathilde retains a sense of childish purity; this is her triumph, and it becomes her downfall. In the film‚Äôs final cycle of brutality, Melville pitilessly makes us feel what Nazism did to the world, through the prism of his more-than-tough characters. If they can‚Äôt get a break, he seems to suggest, then no one can, ever again. Army of Shadows does what no other film about World War II does‚ÄĒit makes you feel exactly what was lost. All that‚Äôs left is ashes and the uncertain phoenix of the Arc de Triomphe, which stands as proud and unmarked in the last shot as it does in the first.