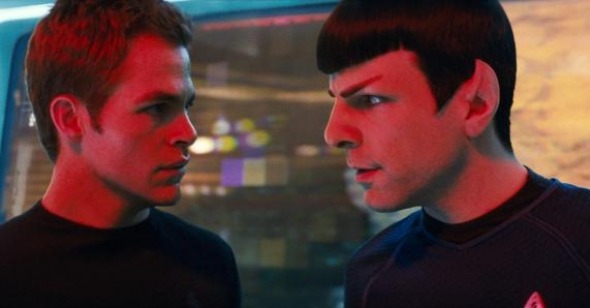 For its shrinking but famously rabid band of devotees, Gene Roddenberry‚Äôs Star Trek‚ÄĒalong with the four spin-offs it spawned‚ÄĒhas always been more than a ripping-good sci-fi Western; it is a grand utopian vision of our future grounded in a generous view of human nature. Star Trek asks hard philosophical and political questions with the unwavering faith that we, as a people, are up to the challenge, and the belief that the answers it gives can reveal to us an image of our best selves. But probing optimism doesn‚Äôt increase Paramount shareholder value. After the success of The Next Generation in the late Eighties and early Nineties, ratings for subsequent incarnations of Star Trek went into a free fall, and recent movie sequels haven't fared any better at the box office. The cancellation of Enterprise in 2005 marked a nadir for the franchise, and for a time, it seemed unlikely to recover.

In this context, J.J. Abrams has taken a sly approach in trying to reboot the franchise with the latest cinematic Star Trek installment. Judging by the first ten films, it's nearly impossible to make a good-to-great Star Trek picture (the success rate hovers around 30-40%‚ÄĒThe Wrath of Khan, The Undiscovered Country, and First Contact undoubtedly qualify, and maybe The Voyage Home, depending on who you consult). Spirited, exciting, and richly entertaining though it may be, the latest Star Trek doesn't even try to be a good Star Trek movie‚ÄĒand by the standards of the franchise, it certainly isn't (this seems to be Abrams's apparently successful trick). Abrams's film has nothing profound or significant to say, but as a blockbuster adventure picture, it satisfies in spite of (and, in part, because of) its relentless superficiality.

This Star Trek is conceived as a prologue, and it opens, in medias res, with a prologue to the prologue: the U.S.S. Kelvin, investigating an abnormal space lightning storm, stumbles upon a trap set by a Romulan vessel, commanded by Nero, a rather angry tattooed fellow (from the future!) played by an unrecognizable Eric Bana. Nero demands that the Kelvin's captain come to his ship, and, outmatched, he complies, leaving his first officer, George Kirk (Chris Hemsworth), in command. Before you can say "unresolved daddy issues," Kirk is leading the ship to certain destruction as his wife evacuates on a shuttle craft while giving birth to their son, future Enterprise captain James (Chris Pine), in a flurry of borderline-incomprehensible camera movements and swift cuts. Here, and elsewhere in the film, Abrams displays little talent for directing action sequences. His visuals are often maddeningly incoherent, a hodgepodge of feet, faces, phasers, and photon torpedoes, but he does have a knack for eliciting spry performances and the good fortune of working with editors Maryann Brandon and Mary Jo Markey, who keep the film clipping along at such a breathless pace it's frequently hard to notice its many stumblings.

Star Trek is a marvel of economical storytelling, so furiously efficient that it‚Äôs almost exhausting, so brisk it forecloses the possibility of thought or reflection. Brandon and Markey have shaped the film into a grandly satisfying Hollywood entertainment, and as a consequence, it's easy to ignore the many ridiculous plotholes in Robert Orci and Alex Kurtzman's script (Can anyone explain logically how Kirk goes from academic probation to first officer of the Enterprise? Does it even matter?). Indeed, the central conflict of Star Trek is so ludicrous that it falls apart upon cursory scrutiny. About 130 years in the future, Romulus is destroyed by a supernova, taking Nero's pregnant wife along with it, and resulting in the creation of a black hole. Ambassador Spock (Leonard Nimoy) tries to save the planet but arrives too late, and Nero's ship (and Spock's, we eventually learn) travels back in time through the black hole to the moment of its encounter with the Kelvin. Nero, consumed by grief, decides to exact revenge by waiting 25 years for young Spock (Zachary Qunito) to end up on the Enterprise and then forcing him to watch as he destroys the planet Vulcan. The motivation for Nero's vengeance is tenuous enough, but you might think that sometime, during his quarter century of waiting, he could have thought to warn his fellow Romulans about their future annihilation and, in the process, averted his planet's destruction and nipped the whole thing in the bud.

Stupefying though it may be, the time travel twist gives Orci and Kurtzman a terrific conceit for Star Trek's sequel-cum-prequel-cum-franchise refresh origin story. By altering the timeline of the original series, Orci, Kurtzman, Abrams, et al have an excuse for rewriting the Star Trek canon: Kirk and Spock both get dead parents, Uhura (Zoe Saldana) and Spock can have their little fling, and, most disturbingly, Vulcan and its six billion inhabitants can be destroyed (a development that's handled a little too lightly in the film). Star Trek walks a fine line between reverence and revisionism, and even though Orci and Kurtzman rarely stray too far from their source material, their approach gives the film a raison d'√™tre and a sense of play and possibility lacking in recent origin-story franchise films like Spider-Man and Batman Begins.

For this film, the original series functions more as a reference point than a sacred text. The costumes and Enterprise sets have an appropriately retro vibe, and the supporting performers have clearly studied their predecessors (Karl Urban's McCoy plays as a rather deft homage to the late DeForest Kelley, complete with a "Dammit Jim, I'm a doctor, not a physicist!"). Still, these references are empty signifiers, meaningless in-jokes meant to convey a sense of self-awareness. This movie is riffing on Star Trek as pop culture, not as an ur-text, while trying to invent a newer, more boisterous, and slightly dumber Star Trek for 21st-century mass consumption. It's the actors who sell it: Pine and Quinto, in particular, step into their starring roles with game, sexy confidence. Star Trek has always played as a protracted platonic romance between Kirk and Spock, its id and superego. Abrams, Pine, and Quinto deserve serious credit for getting that relationship right; it's the only thing of substance about this movie that is worthy of the Star Trek legacy, and it also lays a sturdy foundation for the sequels that will undoubtedly follow.

It is possible that J.J. Abrams had to kill Star Trek to save it. But a little while after this charming, fun action movie released me from its two-hour grip, I spent some time mourning the Star Trek that wasn't‚ÄĒthe movie in which Spock and his crewmates paused to reflect on the implications of a genocide or took seriously the effects of altering the space-time continuum. Whither the end-of-the-Cold War metaphors of Undiscovered Country or First Contact's philosophical reflections on trauma and human nature or even The Final Frontier's absurd but earnest encounter with God? No, that Star Trek is dead; long live Star Trek.