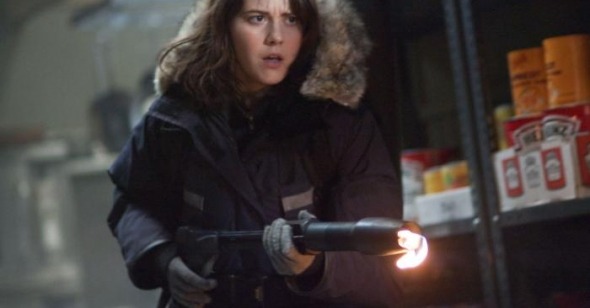 Monday Hangover:
The Thing
By Adam Nayman and Michael Nordine

‚ÄúYou‚Äôve gotta be fuckin‚Äô kidding me.‚ÄĚ It‚Äôs too easy, maybe, to invoke David Clennon‚Äôs great, bug-eyed exclamation in the 1982 version of The Thing: the only ones kidding themselves are those who thought Hollywood wouldn't get around to redoing‚ÄĒor in this case, ‚Äúprequelizing‚ÄĚ‚ÄĒJohn Carpenter's career-benchmark thriller. A reimagining of a remake, then‚ÄĒor maybe, to get into the spirit of a story about an alien intelligence hopping between hosts, it‚Äôs a kind of inhabitation‚ÄĒan attempt to mimic the textures of its source material so that fans and newcomers alike can‚Äôt even tell the difference.

Certainly, setting the action just days before the beginning of Carpenter‚Äôs film and only a few miles away in the Antarctic wasteland gives director Matthijs van Heljingen Jr. ample license to hide inside familiar visual and narrative set-ups. Bereft of the element of surprise‚ÄĒwe know not only that the creature extracted from the ice by this troupe of unwitting Norwegian scientists and their American recruit (Mary Elizabeth Winstead) is going to escape and cause untold havoc‚ÄĒthis Thing really only has a couple of bases to cover. One: it can fill in some the blanks of Carpenter's film about the origins of its extraterrestrial antagonist; two: it can take advantage of computer-effects technology to up the stakes in what Kent Jones memorably called the ‚Äúmutating carcass sweepstakes.‚ÄĚ

To address the second issue first, these special-effects advances are (predictably) a case of subtraction by addition. While I reject the dogma that horror is always better when the seams show, one of the real achievements of Carpenter‚Äôs film is the way it balances the abstract terror of the scenario‚ÄĒthe thing could be anyone of these guys‚ÄĒagainst the heavy, physical qualities of Rob Bottin‚Äôs hydraulic monsters and makeup effects. What we have here is what you might call bloodless gore: gallons of gooshy stuff that never threatens to splatter the actors the way that those dripping inside-out huskies did in the previous incarnation.

As for filling in some back story, why bother? If the last decade-and-a-half of fan-service brand-extensions (starting with those unfortunate Star Wars prequels) has taught us anything, it‚Äôs that the great genre flicks of the seventies and eighties were not compelling in spite of their loose ends but because of them: we need hints about where the Thing comes from and how its spaceship works about as much as we need a whole film about the Alien beasties‚Äô adventures before their long-term courtship of Ellen Ripley‚ÄĒwhich is to say, not at all. I‚Äôll leave some of the other pertinent issues‚ÄĒlike the effect of placing a female character at the centre of a narrative previously used, in two very different ways, as an examination of male group dynamics; and the relative effectiveness of the relatively ambiguous ending‚ÄĒto Michael, and close by actually quoting David Clennon: ‚ÄúThis is bullshit.‚ÄĚ ‚ÄĒAN

Hear, hear, Adam. Unfortunately, however, I can‚Äôt add much more to Clennon‚Äôs apropos words here. The Americanization of the characters (a transparent retcon, as no mention is made of any non-Norwegians at this particular outpost in the previous film) seems to me just a way to avoid the dreaded subtitle; and the fact that our protagonist is now a female serves no discernible purpose other than as an ineffective aping of the Alien films. I take no issue with Winstead‚Äôs performance, but her presence does so little to change the group dynamic that the question once again becomes, why bother? I went into van Heljingen‚Äôs The Thing trying my hardest not to judge it by the probably unreachable standards set by John Carpenter's version; rather than immediately dismiss it, I crossed my fingers and hoped for the best. It didn't work. The many unfavorable comparisons are invited by the film itself, which cares little for the spirit of the ‚Äúoriginal‚ÄĚ‚ÄĒ1951‚Äôs The Thing from Another World doesn‚Äôt even enter the equation here‚ÄĒbut only its name and inherent monetary value as a pre-sold property. This is to be expected, and doesn‚Äôt necessarily a bad movie make, but what‚Äôs so irksome are the already mentioned ways in which The Thing remains faithful to Carpenter‚Äôs film when it‚Äôs convenient and departs from it when it isn't.

Just as bad is the handling of the thing itself: where in the original it was an enigmatic force made all the more frightening by how little we saw and knew of it, here it‚Äôs made into a CGI beast that reveals itself at inopportune times, lunges at potential victims like a mindless predator, and moans like a demon‚ÄĒmeh, meh, meh. Each time I found myself getting into the story and accepting it on its own terms, the creature once again revealed itself in all its dumbed-down glory. It produces neither dread nor the need to do any detective work of our own, so eager is it to reveal itself to us. The Thing entirely misses the less-is-more point of the original, instead going for the easier maximalist route. Both 2004‚Äôs Dawn of the Dead (produced by the same pair responsible for this film) and last year‚Äôs Let Me In proved that a studio remake can do justice‚ÄĒand, in the case of the latter, outshine‚ÄĒthe film it‚Äôs playing off of; The Thing does just the opposite. There are some glimmers of hope here and there‚ÄĒthe cleverest being an excerpt of Men at Work‚Äôs ‚ÄúWho Can It Be Now‚ÄĚ heard over the radio‚ÄĒas well as a few welcome faces, but they‚Äôre overweighed by a lazy execution of a lackluster story.

This is a cynical endeavor trying to placate fans of Carpenter‚Äôs film with one hand while it unsuccessfully pulls the wool over their eyes with the other. That the result is an abomination is somehow fitting, a testament to the malleability of both the creature and the story; that it‚Äôs forgettable is disappointing, but also something of a relief: I‚Äôm comforted by the knowledge that it won‚Äôt come to mind the next time I rewatch the 1982 version. ‚ÄĒMN