The Taking of Pelham 123 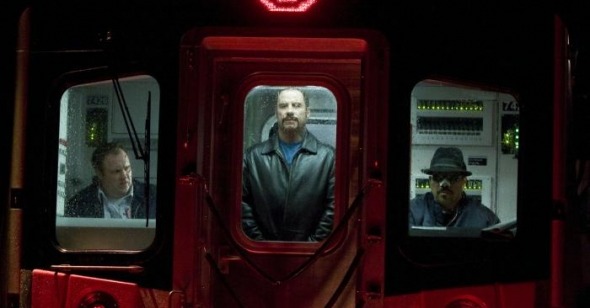 For all our vigilance, who among us critics really knows what actually goes into the making of a movie, particularly those noxious items that make up a good 99% of our North American viewing options on an average Friday night? When looking to lay the deserved blame for an abortion such as the new The Taking of Pelham 123, the names on the screen are most often not an answer but merely a clue. It’s easy to embody awfulness in the form of an especially identifiable (hideous) filmmaker, but what is a Michael Bay or a Brett Ratner—or, yea, a Tony Scott—without the fundamentally unknowable system that abets them?

This writer should admit that in this case he’s dealing from a stacked deck, as the original 1974 The Taking of Pelham One Two Three (note proper spelling) is one of those personal favorites whose dialogue is imprinted verbatim upon the frontal lobe. (Aside: how quaintly disingenuous the continuing practice of contemporary films that claim they are “based upon” the same sources that yielded their blatant cinematic inspirations. Scott’s Pelham ’09 is no more “based upon” John Godey’s forgotten novel than its maladroit “author” Brian Helgeland’s Payback was “based upon” Richard Stark’s The Hunter rather than Boorman’s Point Blank. How rare the honesty of a Michael Mann, who signs his The Last of the Mohicans as based upon not only James Fenimore Cooper but Philip Dunne’s screenplay for the 1936 Randolph Scott film version.) To avoid tiresome parallels, we will briefly catalogue all those easily comparable virtues of the original as opposed to its bastardized reincarnation—the sense of lived-in routine and casual cynicism that gives the quick, passing violence a truly disturbing sense of brute finality; the lean and snappy matter-of-factness of the radioed back-and-forth between Walter Matthau’s professionally rumpled transit cop and Robert Shaw’s impeccably composed hijacker; the vivid and expansive cast of secondary characters, et cetera—and fix solely upon the crucial structural component of both films’ suspense setup.

The problem facing any prospective director of Pelham is its largely static situation: a single, packed subway car halted in the middle of a tunnel, with four heavily armed men demanding a sizable ransom (an inflation-adjusted $10 million from the original’s $1 million for Pelham ’09) in an hour, promising one dead hostage per minute once the deadline is crossed. The crucial ticking-clock factor is thus firmly in place, but its extreme brevity also constricts the ability of the “heroes” to be anything other than reactive—which is both the crux of the bad guys’ plan and the cross the director must bear, with the go-to options of plentiful violence and high-speed pursuit handily choked off.

In Pelham ’74, director Joseph Sargent and screenwriter Peter Stone brilliantly got around their sedentary situation by creating numerous theaters of action around the central fact of the heist, cutting back and forth between them so quickly and precisely that we feel we are being whisked ceaselessly from one point to another: the subway car and transit control center, where Matthau and Shaw duel with both each other and their equally obstreperous subordinates; Gracie Mansion, where a whining, flu-ridden mayor debates with his briskly cynical advisors the pros and cons of losing 18 citizens as compared to a million dollars; the police commands both above and below ground; a lone transit cop in the tunnel, stuck between the gun-wielding hijackers in front and a creeping, jumpy SWAT team behind; and the Federal Reserve, where bank employees desperately count and bind the ransom while an idling patrol car waits, its flatfooted occupants lamenting the fact that the whole snafu will be laid on their heads.

Perhaps needless to say, in Pelham ’09 Scott and Helgeland opt for the standby solution of contemporary studio pictures: cut the overhead (in locations, supporting players, and narrative intricacy) and turn up the volume—not only literally but on the painfully clichéd and dramatically overheated moral contest between the two protagonists. Matthau’s endearing, casually racist Lt. Zachary Garber is given a PC makeover as Denzel Washington’s Walter Garber, whose tiresomely inherent nobility is tritely “complicated” by allegations of corruption; Shaw’s clipped, coldly intelligent British superiority is jettisoned for John Travolta’s laughably caricatured, incessantly cussing faux-philosophical hothead. And the dramatic fire, of course, revolves squarely around the “mirror image” that are good guy and bad, because they’re Just the Same Underneath, can’t you see? Oh, the innumerable facets of human nature; oh, the breathtaking neutering of human experience and feeling these pictures perform, galling if they weren’t so utterly disposable, and indeed intended to be from the first.

There’s a limit to how much tediously rote “entertainments” like this can outrage, of course, which is perhaps their most offensive aspect. These are safely damage-controlled ventures from the outset, insulated from their own horribleness by their intrinsic expendability. Unquestionably, though, there is plenty of immediate blame to go around. Travolta, the most obvious offender, need concern us no longer—though it must be said that, in the long history of screen vulgarity, he offers the least convincing reading of “motherfucker” ever heard, no matter that the script gives him ample opportunity to trot it out. Meanwhile, perpetual director maudit Tony S. must be castigated, ironically, not for his typical visual histrionics à la Man on Fire and Domino—which at least gave ample evidence of willful conceptual intent, however eye-gougingly dreadful the results—but for his thoroughly run-of-the-mill unimaginativeness. Obviously unsure of how to keep his picture moving absent the recourse of actual motion, Scott compensates by insistently tracking and jiggling his camera in every scene absent any conceivable reason for doing so (my favorite: an endless circle around Mayor James Gandolfini and his aides as they have a narratively useless conversation on a street corner) and, as per the idiotic text he follows with dogged faithfulness, “juicing” the audience every ten minutes or so with a shouted confrontation, an arbitrary bit of manufactured suspense, or an inexplicable and cheaply motivated outburst of violence (encapsulated by the fate of two of Travolta’s unspeaking confederates, probably the film’s late-breaking highpoint of unintentional hilarity).

As to that text, Helgeland is undoubtedly the chief culprit here, his script a virtual compendium of every industry-approved writer’s crutch available: sin and redemption (actual line: “You thought if you came down here you’d be redeemed, right?”), bullshit religiosity (“This cab reminds me of a confessional”), tritely topical hook (try to count the ways in which Travolta’s Wall Street–baiting plan makes absolutely no sense), and hamfisted attempts to squeeze contemporary accoutrements into decades-old plot mechanics (a laptop stuck on video chat that makes absolutely no crucial contribution to the outcome). But while the screenplay’s the thing wherein they catch the contempt of us all, blaming the credited name alone is a dead end. Flesh and blood he may be, but effectively “Brian Helgeland” is a pseudonym for the actual bipedal entity Brian Helgeland and the doubtlessly half-dozen or more (at a conservative estimate) anonymous scribes who churned out successive versions of this stillbirth over a period of God knows how many years.

It’s thus that the hydra-headed beast that is “Hollywood” continues to elude us, forever defusing our righteous wrath with its vaporous misdirection. How can we fully and properly hate that which we can never truly see? And more, how can we fully and properly hate that which will soon drop into the memory hole it was knowingly destined for in the first place? The stakes here are so low that it hardly seems worth the effort to get worked up about them—which is precisely the constant which these enterprises count on in their mercenary calculus as they proceed towards their bare break-even point at the box office. Indeed, there’s even a snotty, elitist enjoyment to be had in tabulating the awfulness on display (see: above, everything). Market fragmentation be damned—who says that the dream factory still can’t bring us all together?