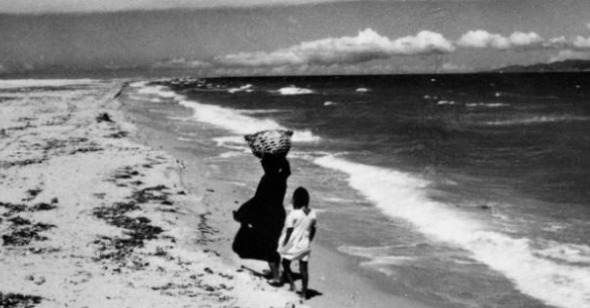 Continuing its mission to rescue lost classics from obscurity, Milestone Films follows up recently restored releases Killer of Sheep and The Exiles with Margot Benacerraf’s lyrical and commanding Araya, a film which, though it shared the International Critics Prize with Hiroshima mon amour at Cannes in 1959, has eluded wide distribution until now. Venezuelan filmmaker Benacerraf focuses on the populace of the titular setting, vast salt marshes located on a peninsula off her home country’s northeastern coast. Although Araya is a cinematic act of preservation—a document chronicling a place and timeworn practices just prior to a move toward modernization by the area’s salt-harvesting industry—the director is interested in expressively rendering the circadian rhythms of Araya’s salt workers and fisherman, and so her film becomes an ode to the people of the region.

Opening images of cloud-strewn skies, waves lapping the shoreline, and parched expanses of land coupled with an incantatory, poetic voiceover (written by Benacerraf and Pierre Seghers) set an epic tone from the start. After providing a brief history of Araya—referencing Spanish conquistadors and salt’s former value on par with gold—the narrator (Jose Ignacio Cabrujas) brings us to the present day, the mid-1950s, as the camera captures men harvesting and transporting salt from the ocean and women weighing and sewing it into sacks for delivery. Hypnotic shots of the salineros walking in line like ants, hiking up pyramids of salt to deliver their loads, carried in baskets atop their heads, and then back down again to repeat the process, convey Sisyphean toil. Of the salt workers, the narrator reflects, “They re-initiate the daily ritual of the salt; they re-encounter the same ancient gestures, and start again endlessly under the same sun.” Over and over, the narrator returns to the same words, intoning in varying refrains a cycling mantra of “sun,” “sea,” “salt,” “silence,” conjuring a sense of recurrence, a feeling for Araya’s long past.

After establishing this context, Benacerraf then shifts her attention to the activities of three local families over the course of a 24-hour period, alternating between each depending on the dictates of their work cycles: the Peredas, nocturnal salt miners; Salazars, diurnal salt miners; and the Ortiz family, fisherfolk. She pays an anthropological attention to the details of their everyday routines, describing every member of the family’s contribution to the unit’s proper functioning. We witness, for instance Beltran Pereda and his sons cutting salt, as wife Daria tends to the house and barters for fish from Isabel Ortiz; Luisa, Beltran’s sister, helps Daria around the house and also makes pottery by hand.

But a dry description hardly does justice to Benacerraf’s film; graphically composed black-and-white images elevate the quotidian tasks of the salt harvesters and fisherman to near mythic level. Extended close-ups on hands and feet toiling in a specific act of work—whether threshing salt or casting nets—are often set to a soundtrack, sometimes tribal-sounding, emphasizing the repetitious aspects of the movements. And the director draws out the almost-barren desert’s beauty in a way that suggests both aridity and abundance at once. So powerful is the photographed scenery—all glittering, salt-tinged seas and windswept landscapes dotted with human figures—that at times the film nearly romanticizes its subjects, so connected are they to the elemental, water and earth. But she keeps this tendency in check via the voiceover, inserting reminders regarding the basic realities—harsh living conditions and perpetual responsibilities: “And daily life endlessly repeats its same gestures. After the salt, eating in silence then . . . sleep. What more is there?”

In 82 minutes, Benacerraf communicates the weight of hundreds of years of uninterrupted tradition. After building up this sense of timelessness, the filmmaker then so perfectly portrays the violent suddenness of the shift toward machination upon Araya‘s conclusion that she manages to inspire both joy and sorrow at once, a testament to the success of her eloquent and elegiac evocation.