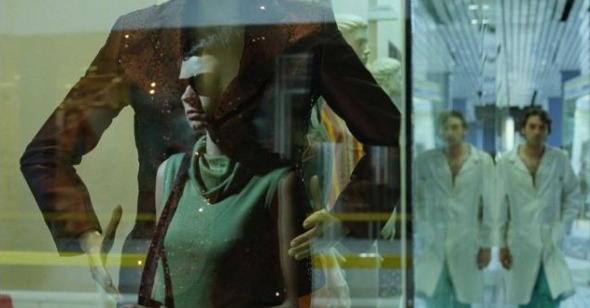 Give Up the Ghost
by Michael Joshua Rowin

Beginning with his 1994 debut Before the Rain—a film that, with its interconnecting intercontinental narratives, can be thanked for providing blueprints for all of those Syrianas and Babels—Macedonian director Milcho Manchevski has tenuously juggled historical inquiries of his Balkan homeland with a strained, lugubrious lyricism. Ever since his breakthrough his questionable auteur calling cards—gratuitous nudity, restless editing, endless establishing shots of local color—have become ends in of themselves and now far outweigh investigations of national identity and political violence, issues that seemed suspiciously like pretenses in the first place. Now with Shadows, the follow-up to 2001’s ridiculous cowboys-against-the-Turks fairy tale Dust, Manchevski has entered the world of the middlebrow horror movie: no guts and blood or high-concept genre revisions here, just a plodding, obvious ghost story with a featherweight moral lesson attached to lend it a whiff of importance and establish thematic links to the rest of his work. It’s a feeble exercise that only further cements the director’s increasing irrelevance—indeed, readers will likely have already asked, “Milcho who?”

Shadows opens with a domestic argument between hospital physician Lazar (Borce Nacev, resembling Adrien Brody) and cuckolding wife Ignjat (Dime Ilijev) that leads to Lazar leaving in a huff and crashing his car on the highway. His survival is miraculous, but soon after recovering with the help of his family (including a young son) at his parents’ lakeside villa and returning to Skopje to go back to his job he’s shaken by several mysterious occurrences. A raggedy crone (Ratka Radmanovic) repeatedly appears at his apartment speaking a dead language, trailed by a wolf; a cantankerous man (Salaetin Bilal) with an eerie child and bloody foot continually waits by the elevator to impart cryptic insults; and a short-cropped, voluptuous temptress named Menka (musician Vesna Stanojevska) shows up with on-again, off-again neck bruises to seduce him into an affair. Neither the overdone choral soundtrack music nor the references to Night of the Living Dead nor the memory of countless “I see dead people” narratives are necessary to immediately get what’s happening—these strange people are ghosts—but it takes Lazar almost two hours to understand what we do in less than a few minutes.

Of course, the point is why Lazar is seeing ghosts, but the answers turn out to be just as lame as Manchevski’s weak stabs at mystery. One strand involves the disturbance of the spirits’ remains by Lazar’s mother (Sabina Ajrule-Tozija), a famous physician who has desecrated the graves of poor Aegeans for purposes of medical research. This too is telegraphed as early as possible—the elder Dr. Perkova clearly advertises her disrespectful materialism when she fails to listen to the mentally deteriorating Lazar and instead shoves money in his hand to secure his happiness. Obeying the spectral command to “Return what’s not yours,” Lazar eventually restores order to the universe by bringing peace to the dead, a facile solution to the history of exodus and exile Manchevski unnecessarily evokes.

The other has to do with Lazar (like Lazarus, you see) getting his midlife crisis groove back. While at first Lazarus is besieged, Repulsion-style, by bugs in his mailbox, the sound of crying children through apartment walls and the taunting exploits of a nubile, exhibitionist neighbor, Menka gives him a reason to fall in love again with some hot ghost action. This allows Manchevski to indulge in serious atmosphere: the haunted-house section brings on echoing wails, impressionistic window reflections, and crooked shadows, while Lazar and Menka’s consummation brings on tasteful sex scenes. The strategy of mood over shock tactics is commendable, I guess, but both the imagery (e.g., the moon dissolving into light at the end of a tunnel) and the plot mechanics are hackneyed and uninspired. There’s not much more to be said about Shadows other than that it throws into doubt the judgment of those who once considered Manchevski a rising star on the stage of world cinema.