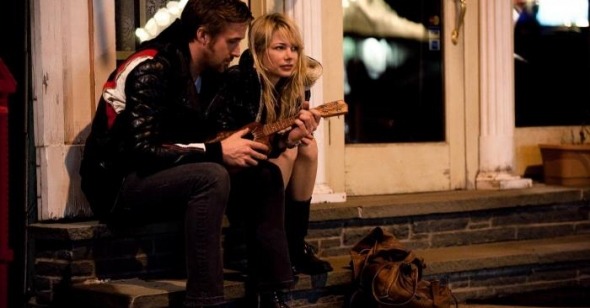 ‚ÄúFall‚ÄĚ is the operative verb when it comes to love. Whether one giddily slides into love or agonizingly plummets out of it, the word imparts a sense of unruly momentum that can be alternately liberating and oppressive, a submission to powers beyond our control. Blue Valentine, the Sundance indie recently elevated to cause c√©l√®bre after its distributor, the Weinstein Company, successfully challenged a stringent NC-17 rating from the MPAA, fully evokes this ‚Äúfalling.‚ÄĚ One can only hope that the ludicrous ratings scandal doesn‚Äôt distract from Derek Cianfrance‚Äôs haunting work itself, which is powered by a simple yet surprisingly effective narrative gimmick: a couple‚Äôs demise is intercut with scenes from the early bloom of their romance, with both stories hurtling towards implosive concurrent climaxes.

The film begins with a few dour days in the life of Dean (Ryan Gosling) and Cindy (Michelle Williams), a working-class married couple living with their daughter in the Pennsylvania suburbs. Their interactions are laced with palpably fried patience and barely concealed hostility, which makes it immediately clear that either they prefer their banter on the bitter side or their marriage is on the rocks. As their relationship begins to decline, Cianfrance reveals how Dean and Cindy met, how he wooed her with grand gestures and a goofy singing voice, and how, despite his limited education, he won over her parents with straightforward sincerity.

Blue Valentine was over a decade in the making‚ÄĒand it‚Äôs to the film‚Äôs credit, and to that of Williams and Gosling, that it feels weighted with the experience of all those years. The film‚Äôs textural disparity telegraphs a slow ruin long before the marriage finally crumbles onscreen: the young Dean and Cindy, so hopeful, so flushed with youthful exuberance, are filmed in nostalgic and saturated 16mm, and their older counterparts, presumably only in their mid thirties, are shot in haggard, grim, and gray digital video. These characters and their initial happiness are so believably realized that there the film ultimately conveys a distinct, authentic sense of loss. Dean and Cindy are rendered individual enough for their romance to have meaning, and yet they are seen experiencing events so cinematically iconographic (a giddy tap dance on an abandoned street) and universally relatable (constant fighting in which the details cease to be relevant) that they could be anybody, once in love but now worn away by each other‚Äôs flaws.

As in the reality following the rush of first love, there are small, dogged imperfections in Blue Valentine, which are at first masked by the beauty of its images and sheer emotional heft, but they surface with time. For instance, it might be twice as wrenching to watch a marriage fall apart when denied the distraction of one more villainous party to pin it on‚ÄĒbut that balance of fault is lacking here. Dean‚Äôs behavior borders on annoyingly clownish and there are references to alcoholism and irresponsibility, but these suggestions remain just that: onscreen, he‚Äôs as charming and ambitionless as the man Cindy fell in love with, she just doesn‚Äôt love it anymore, and her outright repulsion feels unfair. Even when Dean veers into the realm of legitmately crazy, it feels like he‚Äôs earned the right, given the constant rejection and the fact that Cindy has left him a blubbering drunken sad-sack alone on the floor of a cheesy futuristic love motel. More problematically, the narrative structure, which contrasts scenes to slowly intensify its sense of loss, also makes the film feel occasionally disconnected, like a random, discordant collection of vignettes. Individual moments are sometimes left rudderless, floating like little seeds of misery.

Even so, many of Cianfrance‚Äôs scenes are genuinely effecting, and the bounce between increasing happiness and despair are emotionally exhausting. As Dean and Cindy‚Äôs relationship falls into a spiral of bittersweet memories, their story is a painful reminder that any romance can sour, and any life can easily be wasted. Blue Valentine could have been a fiasco, but Cianfrance‚Äôs precision and care with both of his timelines heightens the poignancy of each to the point of excruciation. Don‚Äôt see this movie with someone you love.