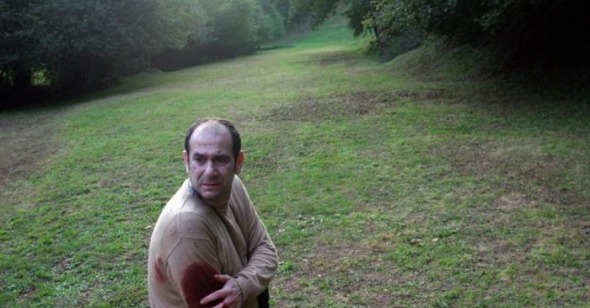 Ages have seemingly passed since a filmmaker fashioned something inventive and exciting out of the time-travel subgenre. 2004’s brief micro indie cause celebre Primer feels a long way off now, but Spanish sci-fi entry Timecrimes—relatively more polished but still modestly “small”—brings back memories of that out-of-leftfield marvel, while going its own fresh way. Unconcerned with special effects or jargon, Timecrimes, the debut feature from writer-director Nacho Vigalondo, makes its temporal loop-de-loops easy to follow while producing something thoroughly mind-bending and, what’s more, successful as an entertaining thriller.

Vigalondo’s brilliant stroke is in telling the same story three times, the first time leaving mysteries unsolved, the second time solving them, and the third time going back over familiar ground to reveal even more mysteries. It all starts with the middle-aged Hector (Karra Elejalde) and his investigations into the strange occurrences that seem to be taking place in the woods across from the backyard of the new home he is currently furnishing with his wife, Clara (Candela Fernandez). Walking to the site of the glimpsed weirdness, Hector tries to help a beautiful, naked, unconscious woman and for his trouble gets a knife in the arm from a man whose head is wrapped entirely in bandages. Aided by a scientist (Vigalondo) stationed at a nearby laboratory, Hector escapes this pursuer only to hide himself in a device that sends him back an hour in time.

The second section of the movie finds Hector, confused and disoriented, struggling to return to his wife. The scientist tries to explain to the person he now calls Hector 2 to just not do anything until time allows him to resume his rightful place (Hector 1 is still around), but Hector 2 takes no heed and sets off for home, in the process becoming the cause of his own problems, necessitating yet another return to the time machine to repair the two-fold damage.

Timecrimes may be a first—the same story told from three different vantage points of the same character. This opens up some interesting cinematic possibilities that Vigalondo does his best to exploit without crossing over into contrivance or needless obscurity. Hector’s thrice-trod adventure, for instance, geographically expands and then enfolds upon itself so that the contained space of the action becomes new and surprising to the viewer with each go-around. There’s also some dry time-travel humor, as when Hector 2 repeats the same action he knows has already happened in order to get it chronologically accurate, an absurd, disturbing moment worthy of Buñuel.

And though Timecrimes might at first glance seem to be merely a witty exercise in further space-time continuum disruption, it also works as a disguised psychodrama of sorts (shades of Maya Deren’s multiplying self in Meshes of the Afternoon, perhaps?), in which Hector’s sexual curiosity ends up causing chaos that can only be repaired to the detriment of others, making the film’s happy conclusion irreparably tainted (word on the street has it that David Cronenberg is helming a Timecrimes remake). In this sense Timecrimes is less about the ethics of time travel—a classic theme that the much more complex Primer did well to reinvigorate—than about fate and the intentional and unintentional forms of ingenuity involved in fooling oneself in order to avoid or correct it. If that makes Timecrimes a puzzle rather than a philosophic teaser, so be it, because this fun, Borges and Dostoevsky-inspired labyrinth just plain works.