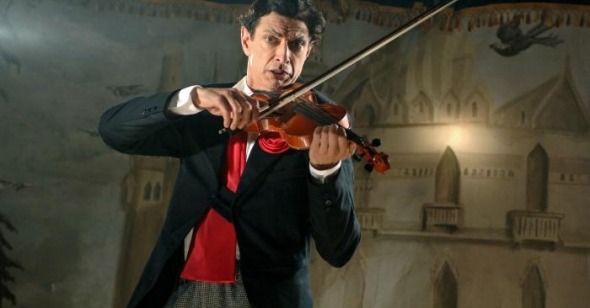 There‚Äôs no joy to be had in enumerating the shortcomings of Adam Resurrected, an ambitious and long gestating adaptation of a much-admired novel by Yoram Kaniuk. But in most respects the film just doesn‚Äôt click: tone stumbles and fumbles meaning, dialogue meanders above uneven visuals, and scenes herk and jerk, frustrating momentum. An arrhythmic quality might well evoke the literary source (which I have not read), but Paul Schrader‚Äôs feature is no better for it.

Perhaps this clunky construction could have been justified by an inspired lead performance. Blessed with supernatural psychic and physical abilities, but cursed with unbearable memories and severe emotional trauma, Adam Stein is the magnetic, sympathetic center of the story, attracting and confounding everyone in his midst. Though Jeff Goldblum would seem to be well cast as Stein‚ÄĒhis charm and physicality have long been underappreciated in Hollywood‚ÄĒhis misguided performance nevertheless crashes the film to the ground.

Hurtling headlong into the role‚ÄĒdancing, singing, blubbering, crawling on all fours‚ÄĒGoldblum honorably keeps nothing in reserve. Always a fascinating screen presence, Goldblum‚Äôs tall, limber body presents a challenge to film framing: he slopes two-shots, extends negative space, or crowds the box. His uniquely shuffled comedic energy seeks out fellow actors to offset, surprise, provoke. The near-total attention he gets here from Schrader and DP Sebastian Edschmid works against these qualities. Though most scenes couple Stein with lovers, adversaries, proteges, or dupes, our attention fixes on Goldblum because only Stein‚Äôs moment-to-moment development matters to the story. The actor responds to the gaze with busyness, baroque physicality, and an unforgivably mannered, uneven parody of a German-Israeli accent. He‚Äôs channeling John Cleese.

One can see how this happened: as written, Stein is larger than life, perhaps too large to plausibly inhabit. A masterful cabaret star during Weimar and later Nazi Germany, performing magic tricks, throwing knives, and practicing telepathy, then enlisted, in exchange for his life, as house ‚Äúdog‚ÄĚ for sadistic Commandant Klein (Willem Dafoe) during the Holocaust, Stein is now perfunctorily entertaining doctors, staff, and patients at an Israeli insane asylum. Stein‚Äôs a consummate entertainer, a mercurial sad clown dependent on a light, ingratiating manner but morose over its corruptibility, and of course weighed down by the past.

Some kind of mad scientist genius, he also supernaturally explodes and then self-heals his own internal organs and out-smarts the team of psychologists challenged to unlock his mind. He‚Äôs a prodigious Casanova as well, seducing and enslaving women of all ages and persuasions. So Goldlbum‚Äôs task is not a small one. He keeps the audience on its toes by veering from comedy to pathos and from randy to rage, but Schrader‚Äôs heavy hand and Goldblum‚Äôs telegraphed characterization too readily reveal Stein‚Äôs game. Our distance from Stein, and Stein‚Äôs remove from himself, widens to unbridgeable by that woeful voice, alternating between Mike Myers‚Äôs ‚Äútouch my monkey‚ÄĚ Sprockets shtick and literal incoherence. Goldblum‚Äôs lips purse with evident strain and radiate paralysis to the rest of his face. How did Schrader allow it? Why didn‚Äôt they ditch the accent and concentrate on the taller task of bringing this impossible character to life?

This is a strange fit for Schrader as well. He‚Äôs at home with psychological portraiture but not with the woolly epic scope of the narrative. Stein‚Äôs violent outbursts and bloody physical breakdowns presage flashbacks that fill gaps in the tragic back-story, sequences that are prestige picture catnip but that Schrader squanders. He‚Äôs interested in Stein‚Äôs subjectivity, his historical head-trip, not Weimar Germany or the gas chambers or postwar Berlin. History ought to pile weight onto Stein‚Äôs character; we ought to know, or at least hear speak his doomed wife and child, the ghosts of his troubled mind. But Schrader cruises through crucial episodes that fail to emotionally register.

The focus on psychology gives the film a strong Seventies feel, something Schrader‚Äôs style and instincts readily support (the book was first published in America in 1971). The Israeli insane asylum, symbolically located in the middle of the desert, has a familiar look and colorful cast of crazies, evoking One Flew Over the Cuckoo‚Äôs Nest paranoia and surrogate family sentimentality and a truly unfortunate Million Dollar Hotel crack romanticism, with Stein as the requisite saner-than-the-psychologists rebel. When Stein discovers that the asylum is harboring a dog boy‚ÄĒa wild-haired child raised on a chain and barking like mad‚ÄĒhe quickly develops an intimate bond that of course serves as the key to unlocking his troubled mind. If this had been made in the Seventies, when Orson Welles supposedly wanted to play Stein, this and Equus would have made for a satisfyingly cathartic double bill.

Stein‚Äôs moment of revelation‚ÄĒan honest-to-god watershed moment of self-reckoning‚ÄĒhas an odd ring to it. His irreconcilable life, haunted by unspeakable horrors and a totalizing guilt that makes the present untenable, is shaped and defined by his being a European Jew who survived the Holocaust. Yet when Stein stumbles into the desert to battle his demons and confronts a burning bush that speaks with the voice of his Nazi tormenter, it‚Äôs not the Jewish god that we think of but Martin Scorsese‚Äôs, with Willem Dafoe transmuted from Jesus to Nazi devil. This strange, almost perverse evocation of The Last Temptation of Christ (for which Schrader wrote the screenplay) veers Adam Resurrected into a deep pocket of Schraderesque Christian symbolism. I can‚Äôt say if Yoram Kaniuk had this in mind when he wrote Adam Resurrected, but it‚Äôs the one moment when this film about a madman is truly, tremendously insane.