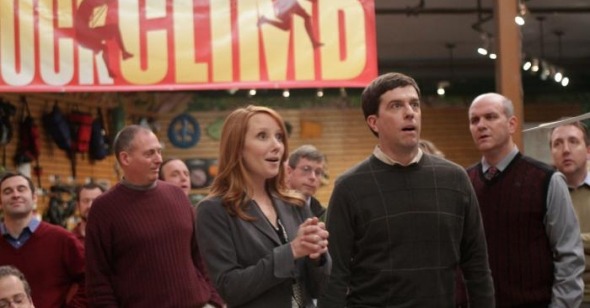 In Cedar Rapids, Miguel Arteta proves that he’s capable of finding humanity and subtext where other filmmakers see caricature and cliché. He envisions rural America as a place threatened by stagnation but capable of endless economic growth, where even the smallest details are worthy of our attention. In a short career that’s found him seamlessly jumping from film to television and back again (he’s directed episodes of Six Feet Under, The Office, Ugly Betty, and more), Arteta consistently fluctuates tones, finding resonance, purpose, and humility in the conflicted lives of emotionally broken Americans. At the center of his films Chuck & Buck, The Good Girl, and Youth in Revolt are confused people participating in a relentless battle between faith and repressed sexuality, and subtle shifts in perspective ultimately reveal themes about friendship and loyalty. Through sudden moments of dark comedy, Arteta shows the consequences of his characters’ moral judgment, frankly examining the way they interact and evolve, break down and adapt. The results might be funny, but the comedy comes with razor-sharp teeth.

Arteta’s latest film, the rambunctious and crass Cedar Rapids, skewers corporate America and celebrates the improvisational spirit of the small business owner. Diligent but unambitious insurance salesman Tim Lippe (Ed Helms) takes pride in his job helping honest hardworking customers solve their problems. Tim’s early childlike voiceover narration, playing over a montage in which he negotiates fair deals for multiple customers, indicates a core respect for the common man. This hard work ethic goes completely unnoticed by his corporate bosses, who are more concerned with public image and business awards than customer service. Tim hasn’t advanced up the corporate ladder because he isn’t strong enough to challenge or even recognize the morally questionable nuances of his workplace. But when a high-profile manager at the firm suddenly dies in the throes of erotic asphyxiation, Tim is forced into a promotion to cover up the deviancy and sent to the annual ASIP conference in Cedar Rapids, Iowa, where he must woo the local chapter president to stave off his company’s impending financial ruin. This transition from small-town life to big-city politicking bursts Tim’s preconceived bubble of safety and pushes him into a professional void.

When Tim arrives at the bland urban hotel to check in for the conference, he finds the standard accommodations and multi-floor architecture exhilarating. Moments later, Tim has a crippling panic attack upon meeting his roommate for the conference, who happens to be a well-spoken African-American named Ronald (Isiah Whitlock Jr.). During these early scenes, Tim’s extreme innocence and vague racism border on ridiculous. Thankfully, when he becomes more separated from work responsibilities and involved with the wonderfully inelegant supporting players, his character begins to evolve. Blowhard Dean (John C. Reilly) and spitfire Joan (Anne Heche), two fellow insurance agents at the conference, complete the film’s quartet of working-class heroes, constructing something akin to a surrogate family for all involved. Still, as Tim spirals in and out of control, partying, philandering, and deceiving, his ignorance and gullibility become more than just running gags, addressing the sometimes-damaging impact his limited perspective has on the group.

Surprisingly, Cedar Rapids’ filthy comic set pieces enrich the biting social commentary beneath the surface. For Arteta and screenwriter Phil Johnston, these two elements cannot be separated—see the film’s supporting performers for further evidence: Reilly’s Dean, who crashes through scenes with potent, foul mouthed one-liners and sexual innuendo like a wrecking ball, ultimately pushes Tim toward understanding the relationship between business sense and personal friendship. Dean may be a goof, but he’s a goof with morals: in a rant against the self-righteous president of the conference, he yells, “This is America, there's a separation between church and insurance.” Likewise, Heche’s Joan proves to be deeper as the film continues: she isn’t just a suburban mother turned party animal, but a tormented woman fighting on the front lines of a male-dominated world. And then there’s Whitlock Jr., whose caring and passionate straight arrow Ronald couldn’t be further from his devious State Senator Clay Davis on The Wire. Hilariously, Arteta and Johnston reference the landmark HBO series twice in tense situations where Ronald quotes a key gangster character from the show, all to instill fear in white characters deathly afraid of his urban alter ego.

Tim’s experiences at the conference—including a hallucinatory visit to a rural house party, a reckless skinny-dipping session in the hotel pool, and a drunken karaoke performance at a dive bar—all force him out of his comfort zone in comedic ways. But Tim’s fun and games come crashing down when he has to reconcile this personal awakening with his practical business responsibilities. The film’s climax, in which Tim must choose between reinforcing the status quo and committing professional suicide, finds hope for individual economic recovery in personal loyalty and self-reflection. “We are all selling something,” Joan says, noting that the great salesmen make business decisions by dealing with the customer across the desk rather than by looking at profit margins. This type of wisdom allows Tim to see his honesty as a strength instead of a handicap, using his natural connection with everyday people as a powerful tool to subvert corporate corruption. Ultimately, the necessity of human contact formulates a lasting business model for Tim’s economic and psychological success, something that gets represented in the absurd commercial that runs over the end credits. Tim, Dean, and Ronald stand together, the trio saving insurance victims in faux recreations of accidents. After a customer falls into their arms, all three yell, “We got ya.” Trust, whether it’s between friends or a local business and the community, is something that has to be earned, valued, and upheld at all costs, no matter how much pressure there is to achieve the bottom line.