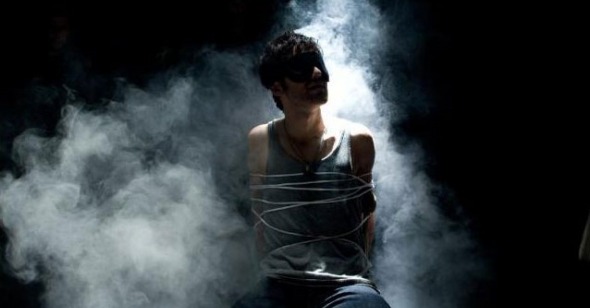 The Party‚Äôs Over
By Matt Connolly

Even more than Pedro Almod√≥var, Todd Haynes, and other former enfants terribles of the queer filmmaking world, Gregg Araki seems caught in the double bind of maintaining outr√© street cred while simultaneously showcasing a more ‚Äúmature‚ÄĚ vision. His Nineties-era oeuvre has become both generational touchstone and lost utopia, with such unapologetically rambunctious and incensed films as The Living End, Totally Fucked Up, and The Doom Generation remembered as much for their promise of an aesthetically and politically engaged queer cinema as for their individual quirks and ragged edges. Araki‚Äôs ‚Äúhomo pomo‚ÄĚ flippancy, down-and-dirty eroticism, and inchoate dread and rage have become so central to the collective idea of the New Queer Cinema (an idea by no means immune to the warping power of nostalgia) that, for some, any film he makes will be judged mostly by its extremity: how much it fans the ‚Äúfuck you‚ÄĚ flame that Araki helped to light some 20 years ago. But one person‚Äôs good fight is another‚Äôs lost cause, and Araki‚Äôs continuing identification with a largely moribund film movement can give his entire career a perhaps unwarranted but understandable feeling of arrested development. His predilection for youthful protagonists and elbow-nudging visual flourishes only contributes to the notion of Araki as a somehow immature artist, more concerned with flipping you off than pointing the way.

Given these crosscurrents, Araki has done pretty well for himself in the last ten years or so. Mysterious Skin kept the focus on the director‚Äôs chosen subject of down-and-out queer teens in turmoil, but displayed a formal control that sharpened his characteristically messy despair to a heart-piercing point. Finally, many trumpeted, Araki has grown up! Stoner comedy Smiley Face soon followed; and while it certainly showcased a shift back to lighter material, the film‚Äôs lively embrace of the subgenre and winning central performance by Anna Faris helped Araki avoid charges of backsliding. (And after Mysterious Skin‚Äôs sexual-abuse-victims-in-freefall heavy lifting, who would begrudge the filmmaker a palate cleanser of ganja hijinks?)

If Smiley Face was framed as the director‚Äôs ‚Äútake‚ÄĚ on the stoner film, however, Kaboom represents a full-blown (and thoroughly self-conscious) return to Araki Land proper. Whether this revived showcase for ambisexual escapades, free-floating conspiracy theories, and snarky banter amidst its central alt-teen clique will delight old-school Araki loyalists or disappoint more recent converts remains an open question. Truth be told, it‚Äôs probably not the most useful one to ask. There are certainly differences between Araki‚Äôs new and old work‚ÄĒthe Waters-esque campy gore seen in The Living End or The Doom Generation feels a world away from Mysterious Skin‚Äôs disturbingly dreamy molestation sequences‚ÄĒbut there is also a powerful connecting thread in the throbbing anguish that lies at their collective center. Be it politicized, personal, or existential (boundaries that frequently become porous over a given film‚Äôs duration), this core of outraged sadness anchors Araki‚Äôs films, simmering under their stylized surfaces and eventually erupting straight through them.

Kaboom is often endearing and occasionally a hoot and a half, but it‚Äôs the first Araki film I‚Äôve seen that really feels like it lacks that grounding sorrow. (Even Smiley Face gave you the occasional poignant glimpse of its heroine‚Äôs potential before it all went up in smoke.) Without it, his quest to make a kind of instant cult classic has a suspiciously pre-packaged feel to it. It‚Äôs one thing to playfully swaddle your movie in the hand-me-downs of midnight movies past, and Kaboom has enough lesbian witches, wink-wink cameos, and assailants in animal masks to give a rowdy late night crowd their money‚Äôs worth. Too often, though, it feels like Araki is just rummaging through his own cinematic closet, mixing and matching old pieces with little regard for why they worked in the first place. It feels less postmodern pastiche and thoughtful subversion than what-the-hell goofiness.

I know, I know: chill out, dude! It‚Äôs supposed to be fun. And yes, there is pleasure to be had in following his pretty young things as they enter their freshman year of college (and, soon enough, one another). Smith (Thomas Dekker), a quintessentially Araki-ish punk-waif, arrives at the College of Creative Arts in southern California along with sardonic high school pal Stella (Haley Bennett). A variation on the director‚Äôs sharp-tongued yet affectionately observed fag/hag duos, the pair navigates their way through the pleasures and pitfalls of early collegiate sexual experience. Stella quickly hooks up with Lorelei (Roxanne Mesquida), a beguiling beauty whose magnetism might have some supernatural backing. Smith, meanwhile, pines fruitlessly for straight roommate hunk Thor (Chris Zylka), a dim-bulb stoner hunk with color-coordinated flip-flops and a short-term goal of sucking his own dick. His erotic frustrations dissipate, however, after taking a bite of a drug-laced cookie at a house party and hooking up with the tartly appealing London (Juno Temple). Sexual possibilities wax and wane as the days progress‚ÄĒincluding sweet-faced crush Oliver (Brennan Mejia), who asks Smith out via digital recording‚ÄĒbut sinister doings soon begin to occupy Smith‚Äôs thoughts. He meets a mysterious redhead (Nicole LaLiberte) at the same drug-heavy party who appeared in a recurring dream, only to see her murdered later that night by a pack of anonymous figures in animal masks. But is she really dead? Are the assailants real? And what might it all have to do with The Messiah, a thirtysomething campus stoner played with pitch-perfect self-awareness by 1990s-era Araki muse James Duval?

Sex has always been a double-edged sword in Araki‚Äôs films. The specter of AIDS hovers over most of the on-screen pairings, and the twisting of intercourse for corrupt and occasionally downright evil purposes can be seen throughout his work. But these dangers have been counterpoised by some of the more relaxed depictions of sex (queer or otherwise) in contemporary American film. Kaboom finds Araki in the latter mode, and the film‚Äôs casual delight in its characters‚Äô various copulations proves its most appealing aspect. Smith‚Äôs encounters with men run the gamut from the endearing (pecking Oliver on the cheek after a concert) to the humorously blunt (a nude-beach hook-up in the back of a married stud‚Äôs van), but it‚Äôs his scenes with London that really sizzle. This is, in part, due to Dekker and Temple‚Äôs effortless chemistry and the sparks that ensue when his smoldering hesitancy rubs against her winking debauchery. But the pair also represent the purest distillation of Kaboom‚Äôs free-to-be-you-and-me raunchy playground, a place where sexual fluidity is the unquestioned norm and shacking up becomes the language by which individuals express not just lust, but kindness and joy. Araki paints this world with a candy-colored visual palette, crafting a stylized carnal utopia where seeming infidelity leads to a blissful three way and a partner‚Äôs dabbling in the dark arts results in some hair-curling antics between the sheets. In Kaboom‚Äôs most sublime sequence, Araki shuttles back and forth between the Smith/London and Stella/Lorelei hook-ups, cross-cutting their symmetrically framed heads to form a chorus of agape mouths, popped eyes, and guttural moans. The cherry on top: the POV perspective of a drugged-out Smith as he stares up at London, whose head becomes an ever-more abstracted kaleidoscope of shapes and colors as Smith slips into erotic abandon.

Unfortunately, Kaboom loses much of its potency when it slides out from under the covers. Its recurring scenes of Stella and Smith discussing their ongoing sexual exploits have a nicely relaxed if somewhat predictable rhythm, even if Araki‚Äôs dialogue contains its fair share of groan-inducing double entendres and stale pop-cultural references. (Stella, in response to an obvious comment made by Smith: ‚ÄúDoes Mel Gibson hate Jews?‚ÄĚ) The real troubles begin when the focus increasingly shifts to the film‚Äôs conspiracy subplot. On the one hand, the film rarely treats its m√©lange of hooded murderers and portentous messages (‚ÄúYou are the chosen son,‚ÄĚ reads an anonymous message to Smith) as anything more than satiric self-referencing: silly signifiers of both filmic clich√© and Araki-esque apocalypse-mongering, emptied of meaning. And yet Kaboom devotes its final third to fleshing out the details of this weightless morass of tropes. We‚Äôre never asked to take it seriously, per se, which makes it that much odder that it comes to take up so much of the film‚Äôs slim 86-minute running time. And before we blow the shut-up-and-have-a-good-time horn, it‚Äôs worth pointing out something else: while the film is certainly ridiculous, large swaths of Kaboom really aren‚Äôt that much fun. Pulling off the kind of whirlwind, genre-tweaking comedy that Kaboom attempts requires a solid sense of farcical pacing. If we can‚Äôt take the film‚Äôs content seriously, we can at least cling to the loop-the-loop craziness of its construction. But Araki‚Äôs scripts have never been models of narrative economy and progression‚ÄĒThe Doom Generation, with its endless repetitions and lurching tonal shifts, feels like an aggressive assault on these very ideas‚ÄĒand this one is no exception. Kaboom‚Äôs pacing feels too slack and its tone too unsure for the pile-on of late-film revelations to register as either engaging plot detail or a parody thereof.

And then there‚Äôs the question of whether Araki is attempting anything besides a facile sex-and-death carnival. Any effort to dig out some vague sense of millennial dread in Kaboom would be thematic dumpster-diving at best. The creation of genuine anxiety requires some tangible link to the outside world, but Araki seems content to cocoon himself in an echo chamber of zanily inconsequential shenanigans that both highlight and declaw his indie-edge. Judging from the general critical reaction to the film, though, this seems to be enough. Sure, Kaboom highlights the director‚Äôs unapologetic libidinousness, and it‚Äôs a welcome sight indeed in an independent-film landscape often hobbled by eye-rolling tentativeness when it comes to sex. But to view him as no more than cinema‚Äôs naughty queer uncle is to shamefully devalue the discomfiting depths he has plumbed within his films. Think of The Living End‚Äôs desperate rape-at-gunpoint between lovers; or the tableaux of two molestation victims as they simultaneously remember their shared assault in Mysterious Skin, a moment of such devastating emotional clarity that unfathomable pain transfigures itself into something like grace. Every film doesn‚Äôt have to go to such dark places, but there‚Äôs a big difference between switching gears and simply coasting. In this way, perhaps Kaboom‚Äôs title does really say it all: an allusion to chaos without any threat of danger, a comic-book signifier safely ensconced in air quotes.