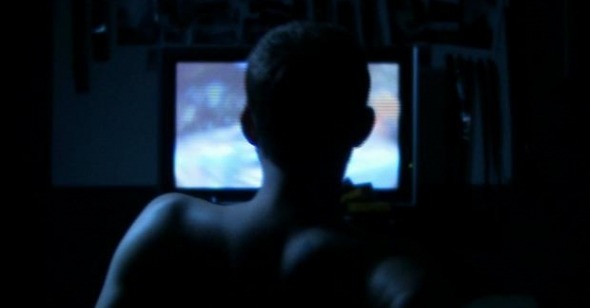 A Fine Mess
By Jeannette Catsoulis

If Paddy Chayefsky and Newton Minow had ever bonded over too many cocktails‚ÄĒsecretly spiked by Neil Postman‚ÄĒthe result might have been The Signal, a grungy warning to anyone who would rather watch than engage.

Television, however, isn‚Äôt the movie‚Äôs only maleficent medium. The signal in question‚ÄĒa crackling hiss of static and snow‚ÄĒbeams with equally terrifying consequences from radios and cell phones, infecting its listeners with nonspecific, pathological rage. Exuberantly merging sci-fi, horror, and black comedy, three writer-directors each take responsibility for one third of the narrative; and if the outcome is more zealous than lucid that‚Äôs not to say the experiment lacks merit. There‚Äôs nothing like the combination of low budget and high anxiety for liberating the id.

Set in a slab-grey city with the dystopic name of Terminus, this breathlessly ambitious bloodbath unfolds over the course of one particularly stressful New Year‚Äôs Eve. Sliced into three distinct segments, or ‚Äútransmissions,‚ÄĚ of wildly varying tension and creativity, the film is most effective at the outset as David Bruckner‚Äôs aptly named ‚ÄúCrazy in Love‚ÄĚ kicks off. With only a few, bleak scenes of smoothly escalating tension, Bruckner firmly establishes his twin trajectories of volatile love triangle and impending apocalypse‚ÄĒan impressive accomplishment when you consider his locations are limited to little more than a rumpled bed, a gloomy corridor, and a concrete parking garage.

While Mya (Anessa Ramsey) drives home to her loutish husband, Lewis (AJ Bowen)‚ÄĒleaving lover Ben (David Hyde-Pierce look-alike Justin Welborn) to twiddle exasperatedly with his remote‚ÄĒher path is strewn with random scenes of violence. Not especially perturbed (it is New Year‚Äôs Eve after all), Mya, sanity preserved by the headphones of her CD player, is slow to catch on even after Lewis and his buddies get to whacking each other: for all practical purposes, there‚Äôs no discernible difference between a husband made homicidal by technology and one who pretty much wants to kill you as a general principle.

Spousicide turns out to be a recurring theme in The Signal, where the only dependable relationship is one predicated on deception. Sliding into the second act, Jacob Gentry‚Äôs ‚ÄúThe Jealousy Monster,‚ÄĚ the film‚Äôs nerve-twanging tone gives way to one of blackest humor as lover and husband cross paths at the home of a chirpily married couple (Cheri Christian and Christopher Thomas). Bemoaning the fact that ‚Äúanarchy has replaced etiquette,‚ÄĚ their hosts take refuge in denial and the comfort of yuppie ritual even as their carpeting becomes increasingly blood-soaked. Tonally riskier and more performance-driven, Gentry‚Äôs slapsticky segment is much tougher to pull off; yet even as it strains our tolerance for quirk and craziness, its director reveals an offbeat comic timing that‚Äôs surprisingly endearing.

By the time we reach the final act, Dan Bush‚Äôs ‚ÄúEscape from Terminus,‚ÄĚ the film‚Äôs splatter count has risen along with its sense of desperation. Bush makes a valiant attempt to restore tension and narrative coherence, but according to the press notes was forced to jettison his original screenplay when Bruckner made drastic, last-minute changes to the first act. Tasked with resolving a radically altered story, he resorts to power tools and dismemberment‚ÄĒall fun stuff, of course, but nowhere near as troubling as the carefully nurtured paranoia of the film‚Äôs early scenes.

Originally conceived as an experimental film project called Exquisite Corpse‚ÄĒin which a series of filmmakers would pass the narrative baton‚ÄĒThe Signal is a slaphappy, low-rent hybrid of 70s exploitation and new-millennium zombie. Charging along with more enthusiasm than finesse, its makers have willingly renounced logic (the signal seems equally likely to induce catatonia as hyperthyroidal rage) in favor of self-gratification. But then again, who hasn‚Äôt?