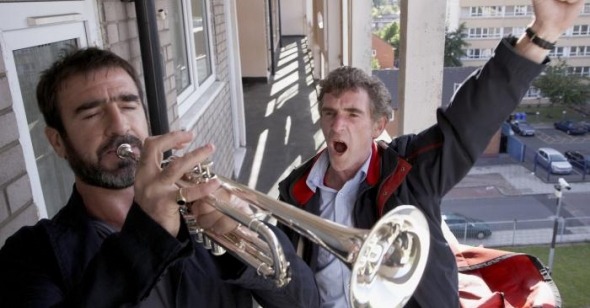 Eric Cantona, ‚ÄúThe King‚ÄĚ and ‚Äúthe man who made football art,‚ÄĚ the French-born hunk who led Manchester United to four league titles, is not a household name in the States. He‚Äôs no David Beckham or even Zinedine Zidane, but trust Ken Loach‚Äôs Looking for Eric that he's a big deal. In the film, Eric Bishop (Steve Evets), is seeing him‚ÄĒnot romantically, or even corporeally, but whenever the troubled postal worker smokes a bit of his stepson's pot, the spirit of the very much alive Cantona appears, counseling him on his life crises like the White House portraits speaking to Nixon. But Looking for Eric is not another Harvey or Drop Dead Fred, because the imaginary friend element is only one in director Ken Loach's genre ragbag, into which he also tosses romantic comedy and his usual social issue drama. Created with frequent collaborators (writer Paul Laverty, cinematographer Barry Ackroyd, composer George Fenton), the film has the same sober, unflashy look and sound as aughts efforts like My Name is Joe and The Wind That Shakes the Barley. There, the deliberate, Loach-ian ‚Äúnonstyle‚ÄĚ complemented the straightforward, hard drama, but here it is not always versatile enough to land the different routines in a movie that occasionally feels more like an omnibus film than one director's vision.

Yet much of it does work, sometimes despite rather than because of Laverty's screenplay, and thanks in great part to the anxious, distracted performance of Evets (his last name is his first spelled backwards). The Salford-born actor has only a handful of credits, in addition to a couple years playing bass for the Fall, and his curly-haired, worn-down lankiness has a pleasant, buy-him-a-pint authenticity. Like other Loach protagonists, Evets‚Äôs Eric Bishop is at a moment of crisis‚ÄĒhe is first seen circling a roundabout three thousand times in the wrong direction. It‚Äôs the same sort of panic attack that led him to desert his pregnant wife 30 years ago and the kind that threatens to soon push him irretrievably over the edge. Eric remarried after that, and that time the wife left him with two sons who've grown into teenage borderline-thugs, whose passions are pot, porn, and beer, and who treat Eric like an au pair. He's also just reconnected with first wife, Lily (Stephanie Bishop), and he's desperate to repair the old wounds.

Eric's idol, Cantona, materializes to furnish romantic advice and helpful-hollow aphorisms (‚ÄúWithout danger you can't get beyond danger,‚ÄĚ ‚ÄúThe noblest revenge is to forgive‚ÄĚ), but he‚Äôs primarily Loach's stand-in for the concept of the medicinal and sane-making camaraderie of sports fandom and friendship. Eric also has fleshly friends‚ÄĒhis post-office coworkers who sense his distress and attempt to revive him with limericks and historical figure-channeling s√©ances. Some of his mates have defected to rooting for Football Club United of Manchester, a team Eric and his Manchester United loyalists view as too-new and corporatized (with company logos on their jerseys), but this sporting rivalry only strengthens Eric‚Äôs ties with friends like the sarcastic Meatballs (played with relish by comedic actor John Henshaw).

Eric's stepson, Ryan (Gerard Kearns), is in too deep with Manchester thug Zac (Steven Marsh), and Eric's obligation to help him allows Loach his detour into the lowlife. This yobbo thuggery (though it brings red paint‚Äďloaded Super Soakers back into contemporary comedy) is the element that clashes most disconcertingly with the magical realism of the Cantona appearances. In My Name is Joe it's a necessary plot crux, and it's everything in the powerful coming-of-age tale Sweet Sixteen, but here it has the feel of a cheap afterthought. By contrast, these scenes of violence (which peak when Ryan pistol-whips his stepfather) also call attention to some of the overboard silliness of the Cantona scenes. High and reminiscing about the dance at which he and Lily met and made out, Eric grows maudlin speaking to the hallucinated footballer about his cherished pair of blue suede shoes‚ÄĒa note too crudely sentimental for Loach.

Partly to aid the football-ignorant (and perhaps partly to flatter Cantona, who also pitched and executive produced the movie), Loach includes several narrated cutaways to actual footage of the King's field heroics. It's an impressive highlight reel, but risks adding yet another genre (sports doc or biopic) to a movie already glutted with them. There's a genuinely touching movie here‚ÄĒEvets‚Äôs excellent performance and his character's nervous breakdown and possible redemption through forgiveness and rekindled affections‚ÄĒbut the layers of padding that contain it end up overcushioning its impact.