Casino Jack and the United States of Money 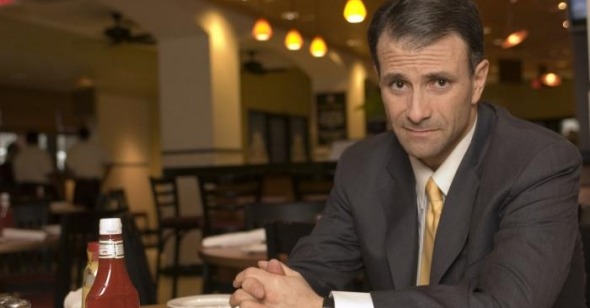 The thesis of the new documentary from Oscar winner Alex Gibney (Taxi to the Dark Side) should be clear from its title. Casino Jack and the United States of Money bills itself as a ‚Äústory of what our democracy has become,‚Äù a sobering examination of the corrosive influence of money on American politics. Coming so soon after the controversial January 2010 Supreme Court decision in Citizens United v. the Federal Election Commission, which overturned a key provision of the McCain-Feingold act prohibiting corporate support of political broadcasts, Gibney‚Äôs film couldn‚Äôt be more timely. But Casino Jack proves more adept at diagnosing and describing a problem than it does at scrutinizing its origins or recommending coherent solutions.

Towards the beginning and end of his movie, Gibney incorporates footage from Mr. Smith Goes to Washington. The lofty idealism of James Stewart‚Äôs Mr. Smith strikes a pointed contrast with Casino Jack‚Äôs depiction of a cringe-worthy Tom DeLay arguing that money is an extension of free speech and therefore an essential element of democratic politics. However dispiriting our contemporary political reality may be, though, this makes for a somewhat flawed comparison, as Gibney perhaps realizes, since Mr. Smith espouses a political fantasy, an idea of what our democracy could be but never has been. Still, the rise and fall of ‚Äú√ºber-lobbyist‚Äù Jack Abramoff‚ÄîGibney‚Äôs titular ‚ÄúCasino Jack‚Äù and the central figure in this excoriating film‚Äîprovides a useful case study in demonstrating just how dysfunctional our pay-to-play political system has become, and Gibney‚Äôs stringent denunciation of this dysfunction is his movie‚Äôs greatest virtue.

Casino Jack, far too long at nearly two hours, is at its best when focused on Abramoff, a figure too absurd and despicably villainous to be fictional. Structured around a series of loose, glibly titled episodes (e.g., ‚ÄúThe Rainmaker,‚Äù ‚ÄúTrail of Tears‚Äù), the movie picks up with Abramoff as a young adult. It tells of his conversion to Orthodox Judaism, purportedly prompted by a screening of Fiddler on the Roof, and his emergence as a young Republican leader on the national stage in the mid-Eighties. Gibney charts the development of Abramoff‚Äôs anti-regulatory political ideology‚Äîthe movie‚Äôs id√©e fixe‚Äîas he follows his hat-loving antihero from a boldly confrontational speech at the 1984 Republican National Convention through a misguided ‚Äúfreedom fighter‚Äù summit in Angola, and a brief foray into movie producing (complete with some guffaw-inducing scenes from the 1989 Dolph Lundgren vehicle Red Scorpion).

Gibney then jumps to 1994 and the beginning of Abramoff‚Äôs career as a lobbyist, reconstructing his various dirty deeds through archival footage, interviews with the principals and relevant talking heads, and reenactments. Despite the film‚Äôs protracted length, it clips along at a brisk pace, and Gibney is clearly eager to entertain, overcompensating for his potentially dry subject matter with an assaultive array of directorial flourishes‚Äîa pop-rock heavy soundtrack featuring Bob Dylan, Metallica, Elvis Costello, and the Flaming Lips; jarring close-ups of gesturing hands during his talking-head interviews; and too-cute effects and transitions (a dollar bill dissolves to a close-up of Abramoff; a crucifix is superimposed on top of the face of a Christian leader). Late in the film, Gibney dramatizes a conspiratorial racquetball game between Abramoff and Michael Scanlon with staged footage of two faceless players hitting the ball back and forth while the text of emails exchanged between the two men flies across the screen and is also relayed through actors‚Äô voiceovers. Too often, this tendency towards stylistic overkill distracts from the substantive issues raised by the film, and as a result, Casino Jack's busyness occasionally comes at the expense of its seriousness.

Though Casino Jack makes its case early and far too often, a few of the movie‚Äôs later episodes are, indeed, riveting, none more so than an extended sequence that traces the consequences of an unregulated labor market in Saipan. Abramoff‚Äôs team sold members of Congress on the arrangement with glamorous tropical vacations featuring extended golf outings. Meanwhile, horrendous labor practices just short of indentured servitude became rampant in its garment industry (congressman George Miller relays a particularly harrowing story about an impoverished factory worker who offered to sell him a kidney so that he could pay his debt off to his employers and go home). In this segment, as well as its depiction of Abramoff‚Äôs exploitation of his Native American clients, Gibney reveals the human cost of Abramoff‚Äôs mercenary lobbying practice.

But Gibney isn‚Äôt content to leave it at that. Instead, Casino Jack tries to make a system-wide indictment. For Gibney, Abramoff is just one example of the dangers of deregulation, and as he pushes towards his conclusion, he strains to connect ‚ÄúCasino Jack‚Äôs‚Äù self-serving, fraudulent business to the lobbying efforts banks made to avoid government regulation in the lead-up to the financial crisis. The connection is tenuous and fairly superficial, and in trying to make it, Gibney shoots himself in the foot: in an attempt to make Casino Jack more relevant, he ends the film on a false note.