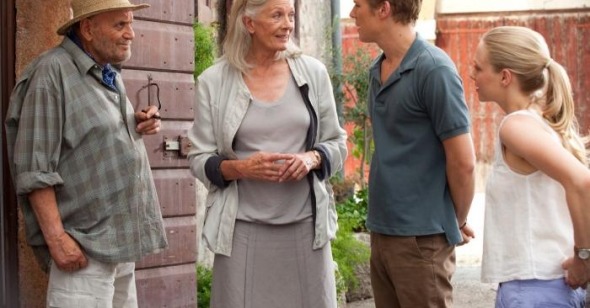 Return to Sender
By Farihah Zaman

The title may have been inspired by Shakespeare, but the content of Letters to Juliet is derived from a sticky romantic comedy subgenre: the Italian vacation movie. In these films, a foreigner, usually a stiff but charismatic woman of high breeding, traipses off to the Italian city of her choice and finds herself seduced first by the beautiful setting and then, softened by the country and its shiny, happy people, by a suitably handsome gentleman whom fate had left right under her nose all along. From forerunners of the genre, like William Wyler’s elegant Roman Holiday and David Lean’s slightly darker and racier Summertime, to Bernardo Bertolucci’s over-the-top Stealing Beauty, nearly any iteration of this stranger-in-a-strange-land setup seems to tap into a deep-rooted fantasy of the English-speaking collective unconscious. (Full disclosure: at fifteen I considered Stealing Beauty the absolute height of sensuality, particularly its ideal scenario for losing one’s virginity, i.e. to a stuttering, curly-haired nerd in the middle of a sun-drenched, public olive grove.) Despite Gary Winick’s directorial track record, which includes both the forced and clumsy 13 Going on 30 and the bewilderingly stupid Bride Wars, Letters to Juliet adequately but superficially evokes the great films of the tradition. While it does not match them in substance, it is not devoid of charm.

The film follows the exploits of Amanda Seyfried’s stiff but charismatic Sophie, a fact-checker for the New Yorker whose dreams of being a writer suggest a romantic nature under her efficient exterior. Sophie feels she is on the cusp of change when she goes on a pre-wedding honeymoon with fiancé Victor (Gael García Bernal), a hotshot chef and restaurateur whose zeal for his work borders on obsessive. Sophie and Victor seem to have little interest in each other’s passions, and once in Italy, he promptly, if politely, ditches Sophie for a nonstop tour of food and wine purveyors. Meanwhile Sophie, on a visit to the real courtyard where Shakespeare’s fictional Romeo and Juliet lived, discovers an organization called the Secretaries of Juliet, made up of smart, experienced ladies who respond to the letters left in the courtyard of the building by lovelorn women from around the world.

Here the film misses a golden opportunity by choosing not to delve into the Secretaries of Juliet—by far the film’s most original and intriguing conceit, which could have elevated the well-worn storyline and limited script. Instead of spending more time with the sharp, sassy secretaries, who convey a sense of old-school Italian glamour as much as any crumbling ruins or rolling hillsides, and their fascinatingly anachronistic organization (which does in fact exist), we are whisked quickly to a more conventional love story. One day while helping collect letters, Sophie comes across one that had been hidden out of sight for decades, written by a young British exchange student conflicted about whether or not to marry the Italian farm hand she has fallen in love with or do the sensible thing by returning home to England. Sophie writes a long, heartfelt response to the letter’s author, Claire, expecting that it will simply fade into the ether. She is pleasantly surprised when Claire (a stunning Vanessa Redgrave) arrives, ready to search for her long-lost love, with her cranky grandson, Charlie (Christopher Egan), in tow.

Cue the breathtaking scenery: lush green farms and orchards, picturesque castles, adorable stone cottages, one welcome cliché after another. Unfortunately, however, there doesn’t seem to be anything more to this travel porn, which may incite vacation envy but no real affection for the characters or swooning involvement in their quest for love. The one-track plot is really just an excuse to languish in these empty visual delights, which provide a pretty backdrop for Sophie and Charlie’s flat, chemistry-free banter. While the liquid-eyed Seyfried is far more charming and relatable here than in her previous turns as a romantic leading lady in Dear John and Mamma Mia!, neither cast nor cinematography can quite lift up the perfunctory writing. Redgrave gives it her seemingly effortless, bewitching best, and the comic, believable touch of all the “wrong” Lorenzos trying to convince her to ride off into the sunset with them provides a few bright moments.

On paper, this girl’s coming of age story and an older woman’s second chance at love seems tailor-made for moving, if familiar viewing. But mostly the film goes through the motions even when the actors are not. As with the Secretaries of Juliet, the behind-the-scenes story outshines the one presented onscreen; Vanessa Redgrave and Franco Nero, who plays the “right” Lorenzo, met and fell in love on the set of Camelot in 1966. Then, after divorcing and being each other’s lost loves for decades, the two friends realized they had never stopped being in love, and remarried in 1996. Letters to Juliet lacks the light-footed passion of a proper Italian cinema romance, the touching quality of real-life romance, and the depth of either. One hopes for a beloved old tune, but the result is something more akin to elevator music.