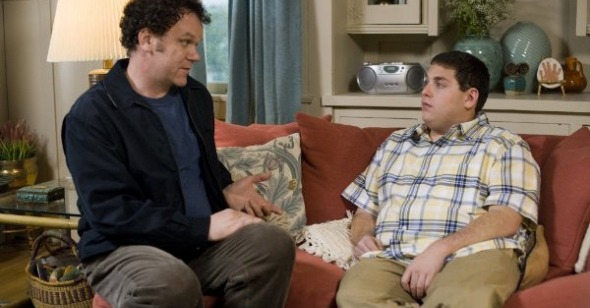 Earlier this year Noah Baumbach’s widely released indie Greenberg represented the first tentative sign that the divisive movement known as Mumblecore was crossing over into the mainstream, as it featured ‘core fixtures Greta Gerwig and Mark Duplass in important roles. But Cyrus—directed and written by Duplass and his brother Jay but distributed by Fox Searchlight; executive produced by another, albeit more famous, pair of filmmaking siblings, Ridley and Tony Scott(!); and starring John C. Reilly, Marisa Tomei, Jonah Hill, and Catherine Keener—leaves no room for doubt: Mumblecore has fully arrived in the larger cultural landscape. This is significant not because it demonstrates that the culture has “caught up with” Mumblecore by paying heed to exciting visions that until now only existed on the margins of American cinema, but because it proves how primed for easy marketability and consumption the movement has been from the word go.

Cyrus features the hallmarks of the Mumblecore style: handheld camera work, halting conversational dialogue, a focus on personal relationships. Yet at heart it’s an Apatow-esque comedy built on MILF humor, and the emotional reality it so desperately feigns via the aforementioned “authentic” aesthetic devices is strictly adolescent. Reilly plays John, a mopey middle-aged freelance editor whose former wife Jamie (Keener) is getting remarried. Though on good terms, John and Jamie have been divorced for years, and John has never quite gotten over it. Jamie convinces him to meet someone new, and after poorly flirting with some uninterested women at a party, a drunken John meets cute with Molly (Tomei). The two wind up in bed and like each other enough to soon start dating for real.

Enter Jonah Hill’s title character, Molly’s fragile 21-year-old son and an electronic music composer who still lives at home. Cyrus bears an unmistakably stunted relationship to his mother. He calls her by her first name, spends an inordinate amount of time with her to the exclusion of any other friends, and engages in creepy behavior, including using the bathroom while she showers. For Molly, her bond with Cyrus is simply one of closeness; for John, that bond stands in the way of his first serious romance in eons. Initially Cyrus’s attachment to Molly just seems unusual, but it quickly manifests itself in passive-aggressive maneuvers for her attention and then out-and-out warfare against John, with each man vying to get the other out of the way.

If the Duplasses fashioned it as unpretentious farce, Cyrus would be nothing more than the latest comedy to anarchically revel in the neuroses of the coddled 21st-century American male. Instead they’ve gotten the tone all wrong by trying to make two incompatible movies at once. Half of Cyrus is painfully sitcomish: Jamie catches John masturbating; Cyrus startles John with a thousand-yard stare while holding a kitchen knife, and later holds up a set of cue cards that read “You’re Going Down” as John attempts to convince Molly of her son’s disturbing tendencies. The jokes consistently bomb due to their almost pathological triteness. A brief example: Jamie practically begs John to go to the party. “I’m not going,” John emphatically states. CUT TO: John at the party.

The other half of Cyrus is Mumblecore, and thus even more painful. With the notable exception of Hill (possibly the most inexplicable Hollywood star in recent memory—no small feat), the film’s cast is comprised of solid actors engaging in unnecessary improvisation. For scenes built around awkward situations this strategy can perhaps be justified, but for dramatic scenes—John opening up to Molly, Cyrus admitting his problems—it’s disastrous. Narrated over choppy montage sequences and a weepy acoustic guitar score, lines like “You deserve someone who can love you in a way I can’t love you,” “I’m proud of us,” and “It’s my fault, too” become wince-inducing emo confessions that fail to provide the depth that supposedly separates Cyrus from something like Meet the Parents. The Duplasses haven’t exactly proved themselves expert dramatists with efforts like The Puffy Chair and Baghead, but it’s still hard to believe that any quality director would take this stuff seriously.

It’s not just dialogue that sinks Cyrus. Since the film takes a page from the Apatow playbook (with low-budget cinematography for street cred), it’s not surprising that its understanding of human relationships is simplistic and juvenile, with dull male characters placing their maturity in the hands of even duller female characters. Just as John’s recovery through Molly and Cyrus’s mommy issues are a matter of predictable course, so does Cyrus ultimately depend on the audience’s complacency in refusing to question how unbelievably naïve, stupid, or infantile Molly would have to be to not notice her son’s unhealthy devotion. The film explains this by making both Molly and Cyrus hippie-dippie free spirits (the latter composes his music while taking inspiration from the photographs they shoot in the park), but this puts Tomei—an underrated comic actress—in the uncomfortable position of having to continually stand in the background, blandly oblivious to the Oedipal battle unfolding in her character’s own home.

The men fare somewhat better since the Duplasses at least recognize the irony of John’s situation: the more he must suffer the clingy Cyrus the more he becomes a third wheel to Jamie and fiancé Tim (Matt Walsh). But aside from one or two annoyed glances Tim shoots at John while the latter regales Jamie with tales of Cyrus’ petty ploys, this field of inquiry remains largely unexplored. John’s path toward self-realization is remarkably smooth—he never discovers the extent of his own dependencies. This is a cop out exemplified in the two-minute apartment clean-up montage that seals his transformation from hopeless loser to how-he-got-his-groove-back nice guy. As for Cyrus—a character who should be a genuine loose canon—he is instead treated as a cartoon, a lighter-side-of Norman Bates whose foibles are left undeveloped by both Hill and his directors.

Mumblecore’s always been more a brand than a movement (a term I too generously applied earlier in this review)—a catchy, media-invented moniker assuring viewers of the intimacy, complexity, and, of course, “authenticity” of films that too often confuse such hard-earned attributes for self-absorption, cutesiness, and limited visual imagination. As an indie supported by industry muscle, Cyrus would be utterly forgettable if it didn’t mark a transitional phase in the short and overhyped history of this brand. Though it’s conspicuously worse than Mumblecore’s usual mediocrity, it’s also the perfect vehicle for selling the brand’s principles to the greater public—aping stupid big-budgeted films, it passes off clichés as the idiosyncratic dysfunctions of “real people” in a “real style,” all while wearing a huge self-satisfied smile on its dopey face.