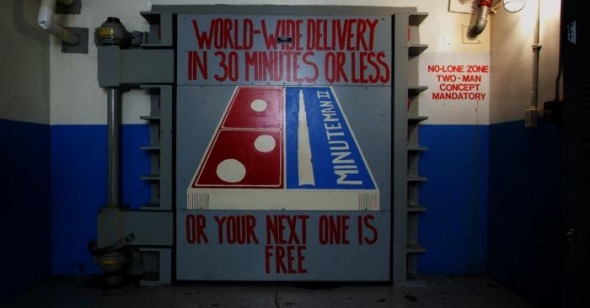 Bombs Away
by Michael Joshua Rowin

This August 6 will mark the 65th anniversary of the dropping of the atomic bomb on Hiroshima by the American Air Force in an effort to end the Second World War in one fell swoop. The bomb not only eviscerated Hiroshima‚ÄĒwhere as many as 200,000 people eventually died‚ÄĒbut disturbingly symbolized man‚Äôs entrance into the atomic age, where he now possessed the ability to ‚Äúbecome Death, the destroyer of worlds.‚ÄĚ

That quote comes from Manhattan Project director J. Robert Oppenheimer, referencing the Bhagavad Gita upon witnessing a test of the bomb in the New Mexico desert. A clip of his sobering reflections of that awe-inspiring and dreadful sight comes at the end of Lucy Walker‚Äôs Countdown to Zero, a well-timed if flawed documentary on the current state of nuclear proliferation produced by the hot-topic team behind An Inconvenient Truth (Lawrence Bender, Jeff Skoll, Diane Weyermann). Like Oppenheimer‚Äôs tearful evaluation, Countdown means to redirect attention to the human consequences and responsibilities of The Bomb, aimed especially at an American public that has placed the issue on the ideological backburner even as the nuclear threat has increased rather than decreased since the Cold War ended.

The problem for Countdown to Zero is how to address the issue cinematically. The threat of nuclear destruction has been endlessly treated in the movies as both theme and MacGuffin ever since Hitchcock‚Äôs pre-Hiroshima production of Notorious, whether humanistically (Lynne Litman‚Äôs Testament), satirically (Dr. Strangelove), or sensationally (The Sum of All Fears). But fiction has it relatively easy since any angle at which to approach The Bomb will play upon an anxiety fundamental to the creation of drama; documentary, on the other hand, should perhaps keep a cooler head by examining the issue with a journalistic concern for the political dimension lost amidst recurrent and spectacular media images of mushroom clouds and fallout shelters. Few filmmakers have chosen this route: while The Atomic Caf√© darkly mocked Cold War fears with a found-footage barrage of ‚ÄúDuck and Cover‚ÄĚ industrial films and tasteless pop culture detritus, Peter Watkins‚Äôs 14-and-a-half-hour television series The Journey engages the nuclear question from rare multiple perspectives: sociological, economic, psychological, environmental, and so on.

Of course, not all documentaries need be so exhaustive. But they should probably be more expansive than Countdown to Zero, which merely succeeds in scaring the living daylights out of the viewer. Taking as its launching point John F. Kennedy‚Äôs 1961 address to the United Nations‚ÄĒ‚ÄúEvery man, woman and child lives under a nuclear sword of Damocles, hanging by the slenderest of threads‚ÄĚ‚ÄĒthe film looks at the possibility of a cataclysmic nuclear detonation by way of ‚Äúaccident, miscalculation, or madness.‚ÄĚ There‚Äôs little positive news: Al Qaeda, for example, is a very bad terrorist organization headed by an Islamic fundamentalist who believes in ‚Äúbalancing the scales of justice‚ÄĚ by wiping out a major American city. That crazed desire can be made a reality due to the poor security of Russia and the former Soviet satellite countries, where highly enriched uranium is apparently easier to filch than potatoes. We learn of the troubling tale of Oleg Khintsagov, a small-time hustler who somehow got his hands on uranium and planned on selling it on the black market to the highest bidding religious extremist group. For a while, the theft went completely unnoticed.

We also learn of errors and near-errors in the military‚Äôs handling of its most precious cargo: downed A-bomb-carrying B-52s and submarines whose weapons were never recovered, accidentally dropped bombs left undetonated due to one last safety mechanism. In 1995 Russia almost interpreted a scientific experiment conducted by Norway as an imminent American nuclear attack; the U.S. once detected the rising moon as a Ruskie bombardment. And if the prospect of hundreds of thousands, if not millions, of lives being wiped out because of a malfunction or misreading of information isn‚Äôt terrifying enough, there‚Äôs always the batshit state of global politics to calm the nerves. Though the United States and Russia control 95% of the world‚Äôs arsenal, Pakistan, one of nine countries in possession of nukes, is on the verge of political instability; it also happens to be home to one Osama bin Laden. Iran is in the process of developing a bomb. North Korea has boasted nuclear capabilities; there‚Äôs no need to explain why the words ‚ÄúKim Jong-il‚ÄĚ and ‚Äúbomb‚ÄĚ make for a stomach-turning combination.

These facts serve their function: as simple reminders of how potentially cataclysmic the nuclear age remains after the supposedly more on-edge Cold War period. But Walker belabors the point; it‚Äôs hard enough to accept the possible annihilation of entire populaces without security camera shots of innocent people strolling about unaware that they‚Äôre targets, overhead graphics of major cities and their fallout circumference areas, and echo-y versions of ‚ÄúOver the Rainbow‚ÄĚ played against images of explosions. Yes, cold, hard evidence of the fragile state of geopolitics is delivered by the likes of experts Valerie Plame, James Baker, and others who understand first-hand the seriousness of the situation. (The most poignant of these talking heads are Mikhail Gorbachev and Jimmy Carter, both of whom express regret at not being able to stem the arms race during their respective reigns).

But any deeper analysis is sacrificed for the unnecessary explanation of doomsday scenarios (to wit: if a nuclear weapon detonates, monumental destruction will transpire) and scientific processes involved in the fashioning of nukes. What of other relevant questions: how obligatory is the use of nuclear power, and what is preventing another Chernobyl-level accident? Is the military philosophy of ‚Äúmutually assured destruction‚ÄĚ essential to peace-via-stalemate with nations like Russia and China? (Recently, in the New York Times, Timothy Egan reiterated the point of how obsolete this way of thinking has become in the age of box-cutter-wielding terrorists). And how do nuclear weapons stand in relationship to the military-industrial complex (hawks have certainly been none-too-happy about Barack Obama's agreement to de-escalate the U.S. production of nuclear weapons), nation-making, environmental disasters, etc.? Indeed, when Walker conducts man-on-the-street interviews, she asks only statistical questions (which countries possess nukes? how many such weapons exist in the world?) to highlight the public‚Äôs ignorance on the issue. How much of a greater service she could have performed‚ÄĒand how much of a better film she could have made‚ÄĒif she asked questions and provided information linking nuclear weapons to our very way of life. Instead she gives us ninety minutes of non-newsworthy red alerts with a ‚Äúyou can do something, too!‚ÄĚ text message number to send one‚Äôs anti-nuclear protest. Countdown to Zero is not only unenlightening but strangely na√Įve.