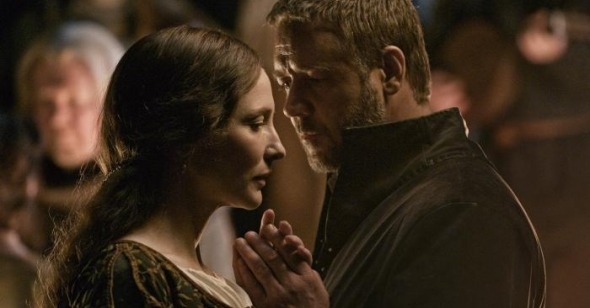 It‚Äôs amusing to speculate about how certain directors continue to maintain pride of place in the Hollywood hierarchy absent the commercial or (far less important) critical returns that would justify their perch. The old dictum ‚Äúyou‚Äôre only as good as your last picture‚ÄĚ appears to apply far less universally than one might think. Like fellow dourpuss Michael Mann, Ridley Scott has had a less than enviable track record over the past decade: one monster (Gladiator) and one medium-sized hit (American Gangster) have been complemented by a series of abject flops (Kingdom of Heaven, Matchstick Men, A Good Year, Body of Lies). That this grim legacy hasn‚Äôt weighed him down more can perhaps be attributed to the uniquely evaporative nature of his stodgy, elephantine aesthetic. Breathing a viscous cloud of money, groaningly stuffed with high-priced talent on both sides of the camera and apparently unlimited resources, the films of Scott the Elder (even the half-decent ones) nevertheless seem to wisp away the moment they end. Cloaked in a gloomy aura of faux-respectability, Scott‚Äôs brand of high investment/low impact filmmaking makes him something of an anachronism in the quick-hit mentality of contemporary Hollywood. Like Mann, this former trendsetter of the slick and ultramodern now seems like the last of the puffy Hollywood dinosaurs inexplicably kept alive by big-studio life support, a George Stevens for the 21st century.

It‚Äôs hardly a surprise then that Robin Hood is merely another dreary step on Scott‚Äôs long slog, its scanty virtues wholly negative ones (primarily a lack of that self-consciously sadistic, souped-up ultraviolence that has begun to infiltrate even kiddie pictures these days). The only slight interest to be derived from this grindingly predictable umpteenth retelling of the old legend‚ÄĒrather thinly disguised, in superhero-style franchise-speak, as the heretofore unknown ‚Äúorigin‚ÄĚ of our bow-wielding hero‚ÄĒis how rigorously Scott works against hitting the familiar pleasure centers that these hoary old tales can still stimulate. Like so many of today‚Äôs ‚Äúentertainments,‚ÄĚ Robin Hood has the paradoxical effect of painfully distending time with its wearying length (141 minutes) while simultaneously rushing through narrative, character, and atmospheric development at blinding speed, handily blocking viewer interest or investment. Equally typical is the film‚Äôs resolute lack of direction or any sense of considered narrative construction, evident directly from the opening: some painfully banal gothic scroll text sets the scene (‚ÄúIn times of injustice,‚ÄĚ etc.), and cut to a context-free scene of a salt-of-the-earth Lady Marion (Cate Blanchett) interrupting a night raid on a grain barn by a group of feral children, cut back to idiotically unspecific scroll text, cut to portentous title screen of an arrow leaving a bow in slow motion.

From the outset, then, Scott establishes the entire film‚Äôs brutally clumsy narrative schema. Shunted to France via an undistinguished battle sequence, we meet our hero, and the film‚Äôs one slight opportunity for interest: rather than a disenfranchised nobleman, Russell Crowe‚Äôs Robin is a simple yeoman archer in the crusading army of the vainglorious Richard the Lionheart (Danny Huston, bellowing). Absent title and privilege, Robin shows a loyalty to king and country that is divested of patriotic noblesse oblige and takes on the quality of mandated subservience‚ÄĒand one that could potentially turn on the arrogant entitlement of his ‚ÄúGod-willed‚ÄĚ masters. Crowe plays this note fairly well in his early scenes, his downcast eyes and reserved, low voice in front of the king indicating that fealty that comes from fear of punishment rather than devotion‚ÄĒa fear thoroughly justified when Robin‚Äôs frank talk to his sovereign on the justness of these ‚Äúholy wars‚ÄĚ lands him in the stocks with proto‚ÄďMerrie Men Will Scarlet (Scott Grimes), Little John (Kevin Durand), and Allan A‚ÄôDayle (Alan Doyle).

Escaping after Richard is dispatched by an arrow to the neck during the last stages of the siege, Robin and company make their way to England under the guise of the deceased knight Robert Loxley (Douglas Hodge), long-absent husband of Blanchett‚Äôs Marion; just prior to his death, Richard entrusts Robin with his sword to return to his father at the family estate. Fulfilling his troth, Robin is convinced by the elder Loxley, Sir Walter (Max von Sydow, hammy), to take the dead prodigal‚Äôs place as lord of the manor and husband of the distinctly displeased Marion in order to prevent the baronial lands from being seized by the grasping tax collectors of the newly crowned King John (Oscar Isaac, mincingly monotonous), whose chief henchman, Sir Godfrey (Mark Strong, bald), is playing a double game as both John‚Äôs right arm and a stalking horse for a French invasion of England.

If all this sounds tiresomely convoluted, ‚Äėtis‚ÄĒand endeavoring to diagram the above demands far more investment than enduring its onscreen realization. As with Mann in Public Enemies, Scott yanks his story from location to location for a series of rushed dialogues, favoring the illusion of motion that these geographical leaps ineptly provide rather than a considered building of atmosphere and momentum. Perversely (if unsurprisingly) for a big-budget historical epic, Scott stages most of his ‚Äúaction‚ÄĚ in undistinguished, ground-level medium shots and flip-flopping close-up dialogue sequences; after an hour of this, one‚Äôs starvation for a few picturesque vistas is only briefly sated by a lovely shot of the Thames Estuary, or Robin and his men‚Äôs first arrival in Sherwood under sun-dappled branches.

The film‚Äôs human resources are similarly slight, or rather slighted by the desultory inclinations of both director and screenwriter (the perpetually maladroit Brian Helgeland, whose last credit was for Scott the Younger‚Äôs laughable remake of The Taking of Pelham One Two Three). Despite his oft-unbearable public pomposity, Crowe remains a resourceful actor particularly adept at small, telling effects‚ÄĒnote a nice little moment in American Gangster where his dogged detective finishes his bar exam, checks his watch, and enjoys a private smile of quiet satisfaction. Crowe‚Äôs persistent problem is that he is a reactive actor rather than a properly acting one. Provided with a source of friction‚ÄĒhis underdog pursuit of slick drug kingpin Denzel Washington in Gangster, his man-of-action‚Äôs predictable but serviceable philosophical clashes with civilized ship‚Äôs doctor Paul Bettany in Master and Commander‚ÄĒhe can generate some interest; cast as an uncomplicatedly virtuous leader of men (Gladiator and here), he has little to offer beyond dull stoicism and chesty authority.

There is, however, a brief, and quickly squelched, promise of that necessary friction in his interaction with Blanchett‚Äôs prickly Marion. Though her natural magnetism has been considerably diminished of late by her star-power posturing, Blanchett, like Crowe, is a skilled old pro, and their initial scenes together‚ÄĒCrowe‚Äôs piss-taking peasant smugly enjoying his lordly masquerade, Blanchett‚Äôs lady growlingly forced to kowtow to him as husband and master‚ÄĒthrow off a few familiar but pleasurable sparks. Dependably, however, Scott intrudes upon the slow burn of their kindling romance, cutting away from Robin and Marion‚Äôs bonfire pas-de-deux for some far distant plot business and then cutting back to Robin and Sir Walter as the latter reveals the long-buried secret of Robin‚Äôs patrilineal descent: seems that Robin‚Äôs stonemason daddy had some unique ideas about all men being created equal, and set them down in a document that bears a certain resemblance to one M‚ÄĒ‚ÄĒ C‚ÄĒ‚ÄĒ. . .

The head-shaking silliness of all this aside‚ÄĒcompounded shortly thereafter when Crowe graces us with a rousingly ahistorical oratorical salute to good old centuries-distant democracy‚ÄĒwhat‚Äôs telling is the relative weight of narrative emphasis on this wholly unnecessary chunk of backwards-looking motivation at the expense of the still-progressing story. There‚Äôs a curious insistence in Hollywood action-adventure films these days (doubtless aided by the comic books that provide such an increasing amount of their adaptive material) on the centrality of origins, from the X-Men to Batman to Bond and beyond‚ÄĒoften, if not always, revolving around daddy issues. We‚Äôll leave the speculations about the deep cultural reasons for this to the zeitgeist-inclined; what‚Äôs more important, to these eyes, is the possible connection this trend has to the steadily deteriorating art of cinematic storytelling. Where the end goal of this marvelous craft has traditionally been that of detailing a change wrought in the protagonist via experiences undergone in the course of the story, the origin-hunters lay a rigidly deterministic framework over this development. Blessed with the predestination of lineage, the hero inevitably becomes the hero he or she was destined to be since time immemorial‚ÄĒa revelation that precludes any greater awareness of the world (and effectively quiets the revolutionary kernel of the Robin Hood legend) in favor of a self-centered heroism granted by divine right.

Predestination, of course, has long been a narrative engine unto itself, from Oedipus to Arthur to Douglas Fairbanks. What makes this current, bastardized incarnation ruinous for Hollywood storytelling, however, is that it contributes to the entirely rote and disinterested detailing of narrative events. Mistaking fate for character (cf. Johnny Depp‚Äôs Dillinger in Public Enemies), far too many Hollywood filmmakers are content to set their familiar stories in grooves that preclude surprise or wit. Bowed down with the weight of the past, rushing through their stories to solemnly validate that heritage, they rob us of the moments in the present when those same old reliable tropes can kindle once again.