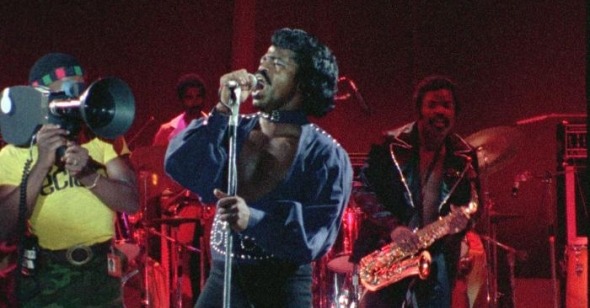 “One ever feels his twoness—an American, a Negro; two souls, two thoughts, two unreconciled strivings; two warring ideals in one dark body whose dogged strength alone keeps it from being torn asunder.”—W. E. B. DuBois, The Souls of Black Folk

Like Wattstax, shot in 1972 at an L.A. Coliseum concert commemorating the tenth anniversary of the Watts riots, emceed by Richard Pryor and headlined by Isaac Hayes, Soul Power is a booty-bumpin’ verité film that illuminates a specific moment in black political culture. Part time capsule, part chronicle of a transatlantic journey to Mother Africa, Soul Power captures the spirit of optimism and celebratory, homeward-bound impulse of notable black and Latin musicians through the backstage banter and energetic performances of its most legendary participants: James Brown, Celia Cruz, Bill Withers, Miriam Makeba, Fania All Stars, the Spinners, B.B. King, and many others. Distilled from 125 hours of archived footage, the movie documents “Zaire ’74,” a three-day music festival held in Kinshasa on the eve of the “Rumble in the Jungle,” Muhammad Ali’s famously seismic title bout with then-heavyweight champion George Foreman, previously anatomized in Leon Gast’s Oscar-winning When We Were Kings. Jeffrey Levy-Hinte, a prolific producer (Roman Polanski: Wanted and Desired, Mysterious Skin) and an editor on Gast’s film, mines the leftovers, reconstructing a star-studded event that languished in the vaults for two decades.

Since Levy-Hinte adheres to verité dogma—there are no voiceovers or retrospective interviews, and very few intertitles to provide context—the sociopolitical milieu of this footage is worth briefly elucidating. In 1974, the groovy hippie idealism of the Sixties counterculture had all but vanished in a druggie haze of self-destructive decadence. The most eloquent voices of the student antiwar movement, cowed by Nixon’s “silent majority,” had retreated to academia, the halls of Congress, or the hideaway bunkers of the Weather Underground. Woodstock, the era-defining film captured “three days of peace and music,” while Albert Maysles’s Gimme Shelter zeroed in, just a few months later, on a social movement in the throes of murderous self-annihilation. But the black-consciousness movement was in full flower around the world, emboldened in the U.S. by the assassinations of Malcolm X, Martin Luther King, and Robert F. Kennedy, the fever pitch of the busing crisis, Black Panther community activism, and the struggles of various liberation movements in African countries.

W. E. B. DuBois had written presciently at the turn of the century of the “double consciousness” that defined the experience of postslave populations. The concept informed his dream of global cooperation among peoples of color, and took root in the modern civil-rights era, when continued bloodshed on home soil led many black intellectuals and activists to embrace Afrocentric doctrines emphasizing the continuity of cultural traditions among the black diaspora. “Soul” was the colloquial name given to this sensibility. “Zaire ’74,” though long faded in our historical memory, was a flash point for such ideas, mounted to project positive images of blackness and reaffirm the special status of Africa-derived cultural forms. “I need to do my thing,” Brown belts out over the opening titles of Soul Power, before we see him enact a dazzling display of shimmying, cut-me-loose footwork as the band poises to launch into a funky, set-opening horn-blast. Music has always been a vehicle for expressions of discontent, but for many black artists of the time, it was also a pulpit for testifying to the liberatory spirit of self-realization. Brown didn’t just sing “I’m Black and I’m Proud,” he embodied it in every performance.

Sponsored by the government of dictator Mobutu Sese Seko and backed by a Liberian investment outfit, the festival was the brainchild of South African Afrobeat pioneer Hugh Masekela and New York–based record producer Stewart Levine, who sought to create a sense of pan-Atlantic unity by bringing together top performers from Africa and the U.S. After teasing us with Brown’s muscular, stage-prancing rendition of “Soul Power,” Levy-Hinte winds back the clock to a few days before the event, dropping us in the midst of various planning efforts: Levine, his eyes glazed and shirt unbuttoned to the waist, merrily works the phones and gabs with staffers who are arranging travel permits for the talent. A soul-food barbecue and press conference held at the JFK Holiday Inn affords plenty of group hugs among the celebs, photo ops for the press, and big smiles for a couple of starry-eyed autograph seekers. On the opposite side of the ocean, festival coordinator Alan Pariser and sound/light engineer Bill McManus problem-solve some technical issues while trying to fend off an uppity suit anxious about scheduling mishaps he thinks the artists will take advantage of. (The Ali-Foreman fight was postponed three months, but the concert went ahead as scheduled.) Levy-Hinte also cuts in images from the streets of Kinshasa, including a roadside sign that reads: “Black power is sought everywhere, but is already realized here in Zaire.”

Needless to say, while such sequences establish the jubilant vibe and exotic setting of the event, this is hardly riveting material. Things perk up once the American performers are en route, and one of the best bits in the film is an impromptu, in-flight jam session led by Celia Cruz and the Fania All Stars, whose raucous, salsa-fied cacophony emblematizes the joy of music-making. On the ground in Kinshasa, George Plimpton pops up at a greeting party to declare, “I’m drunk in Africa,” a pointless echo of his bibulous presence in Kings. Putting aside these feints and interludes, it’s the banter of the film’s three presiding dramatis personae—Ali, Brown, and fight promoter Don King—that brings into sharper focus the political imperatives underwriting the sojourn to Zaire. Ali’s grandstanding, off-the-cuff remarks to the cameras pack all the punch of his pummeling jabs in the ring, but are cushioned in his characteristically zesty humor. Spotting SNCC activist and Black Power advocate Stokely Carmichael at breakfast, he jests, “Don’t burn up nothing over here!” Surveying the township, he marvels at how “peaceful” the country is, then launches into a free-associative litany of all the brutalities to be found in the “jungle” of New York City, conscientiously inverting all the Conradian clichés of the Dark Continent. “The savages are in America,” he quips, his insouciant observations bearing wry morsels of truth.

While Ali is the most outspoken and poetically inclined of the troupe (Levy-Hinte studiously avoids reusing footage from When We Were Kings), it’s refreshing to see Don King, sans the mini American flags, patriotic slogans, and outlandish costumes that would later become de rigueur accoutrements, weigh in on black Americans’ desire to reconnect with their roots and tradition. “Black is here!” someone declares in assent. Yet, true to later form, he isn’t above bragging about the $14 million he raised to fund the dual event. The Godfather of Soul has the most honest rejoinder for a reporter’s question about the money paid out to the artists and festival organizers: “You don’t get liberated broke,” he huffs. While these Three Kings hold forth throughout the film, other luminaries are seen wandering Kinshasa at various points. Cameroonian alto saxophonist Manu Dibango serenades a group of children with a flurry of cascading notes, directing them in a chorus of syncopated handclaps. Ray Barreto, master of the conga, ventures to try out some native percussion instruments. Spinners singer Phillippé Wynne mingles amicably with the natives, too, then pops into a local gym to engineer, with fake bravado, a comical sparring session with Ali. Certainly, there’s an element here of “tourists taking in the local color,” but there’s also a palpable sense that these artists are in search of meaningful intercultural exchange. Oddly, they seem utterly oblivious to the bloody machinations of Seko, their Pan-African-boosting host, whose image hovers over public spaces like Stalin’s once did, or Hafez Assad’s or Kim Il-sung’s.

Obviously, the central appeal of Soul Power is the music, energetically photographed by a crew of distinguished cinematographers using handheld 16mm cameras: Albert Maysles, Roderick Young, Paul Goldsmith, and Kevin Keating are among those credited. The Spinners, Miriam Makeba, Fania All Stars, and a number of lesser-known acts from Zaire, such as OK Jazz, all get a chance to strut their stuff. Accompanying himself on guitar, Bill Withers delivers a slow-rolling rendition of his plaintive soul ballad “Hope She’ll Be Happier.” B.B. King, glimpsed backstage at a piano, makes sly references to his voracious appetite for pretty women, then delivers an absolutely smokin’ version of “The Thrill Is Gone.” Makeba, who was married to Carmichael at the time, introduces her novelty hit “The Click Song” with an instructive bit about its Eurocentric title, speaking to the way white-colonialist domination extends even to indigenous language. Then she recites her full name in her native tongue of Xhosa, a gorgeous stream of tongue clicks and syllables as long as a Proustian sentence.

Levy-Hinte packs a lot of high-energy performance into the second half of Soul Power, and it’s worth seeing for the bracing power of Brown’s set alone. Anyone longing for a strong storytelling arc, however, will be disappointed, though I suspect this has more to do with the extant footage he and editor David Smith were working with and less to do with their facility for the rhythms of drama. Watching this spectacle unfold, I couldn’t help thinking that the concert film, despite the latter-day efforts of Jonathan Demme (Neil Young: Heart of Gold) and Martin Scorsese (Shine a Light), may be an exhausted genre. The era of rock ’n’ roll as cultural event preened and growled noisily for a while in the late Sixties and Seventies, when stadium shows still galvanized crowds around issues of the day, largely independent of corporate branding and commercial marketing schemes. Filmed concerts then went artsy-weird for a brief time in the Eighties (Stop Making Sense, Urgh! A Music War, The Decline of Western Civilization) before fizzling out. What made a handful of these earlier films so watchable, and what makes them still fascinating today, is more than boomer nostalgia or the intimate, you-are-there record of grand musical performances. It is the relationship between music and politics they imply; the image of people united by a shared sensibility or goal, that of a social movement finding its legs or tumbling senselessly into self-extinction. Truth or Dare, Shut Up & Sing, and Year of the Horse all have merit as under-the-skin portraits of individual performers at their peaks, but they are essentially hermetic artifacts designed for fans, tracing creative journeys or touring crises that belong, in the final analysis, to the private experience of veteran performers. Soul Power might not feel urgent today, certainly not when the funeral of Michael Jackson (who copped Brown’s moves, not his pride) rouses more public interest than the campaigns in Iraq and Afghanistan, but it hearkens to a time when music mattered enough that entire nations took notice.