The Act of Killing 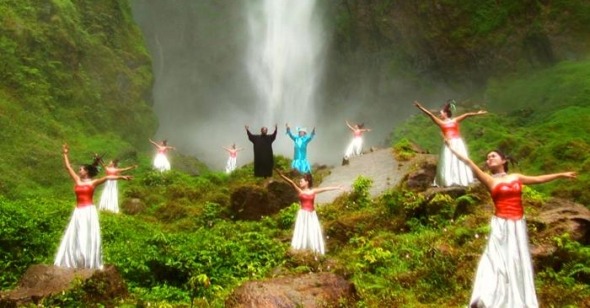 In Cold Blood
By Ohad Landesman

The astonishing and unconventional The Act of Killing burrows to the heart of human darkness. The film looks back at Indonesia’s well-kept secret: the mass murders carried out after its 1965 military revolution. This horrendous anti-communist purge, in which more than 500,000 people were brutally slaughtered by the army and its paramilitaries, has received little introspection at home and almost no international attention. Thousands of innocent victims, including Chinese people, landless farmers, and unionized workers, were slaughtered for being suspected as communists, while the killers themselves have never been brought to trial or punished in any way. Not only that, but the perpetrators of this massive genocide have actually seized powerful positions in the country, becoming wealthy and well-respected citizens.

Joshua Oppenheimer, determined to dive to the bottom of this uncharted territory, came to Indonesia in 2001, contacted human rights agencies in Jakarta, and started working with the community of survivors. He soon learned that, given this unique historical situation, the conventional route of filming and interviewing the victims of genocide could make way for a more adventurous documentary strategy: talking to the perpetrators themselves. Oppenheimer met over forty of them, who now live in Indonesia as distinguished and wealthy ex-gangsters. Quite astonished to find out how open and willing these boastful murderers were to recount their acts of brutality, he brought to some of them an unusual suggestion. He proposed to help them reenact their horrible acts in painstaking detail in front of the camera. Thus their stories would be told not straightforwardly in verbal confession, but dramatized grandiosely in a film-within-a-film structure according to their method of choice. The result is one of the most horrific and morally twisted acts of performance in all of cinema, in which perpetrators willingly and happily restage incidents of appalling violence.

The Act of Killing does not concern itself with replicating reality in the typical documentary manner: recording or preserving historical evidence. After all, since the perpetrators have never really denied their heinous acts, the film is not burdened with a need to prove anything. Alternately, Oppenheimer strives to document the imaginary world of criminals, their hideous fantasies and hidden perversities. Put differently, it does not look toward the world out there, but penetrates the illusive unconsciousness by expressing nightmarish desires. It is only appropriate then that The Act of Killing commences in a delirious state, representing a dream without a dreamer. Out of a colorful fish-shaped structure, gold-dressed dancing girls emerge in rhythmic movements. An overly eager directorial voice is heard in the background, instructing the participants not to let the camera catch them “looking bad,” and to “smile, smile, smile.” Without any clear narratological roadmap, then, the film has begun inside the heads of its yet-to-be-introduced subjects, and expresses quite evocatively a pure performance. Soon after, we first meet two central figures, Anwar Congo, one of the main executioners in 1965, and Herman Koto, a gangster and paramilitary leader. The two are looking for volunteers from a small village, people who would play communist victims in a reenactment of a terrorizing act. “You try to prevent us from burning down your house,” Koto explains to a young woman acting her role. “But in the end we burn it down. So you cry and hug this ugly kid.” Once the filming occurs, we witness a disturbing mayhem of crying mothers and shouting children, which culminates in a strong round of applause from those who stand and watch. A similar reenactment of destroying an entire village will appear later in the film, this time much more intensely and brutally, leaving the villagers, mostly women and children, traumatized and crying in agony. Herman then turns to his young daughter, who participates in the act and sobs inconsolably, telling her, “You’re embarrassing me. Film stars only cry for a moment.”

Oppenheimer challenged the killers not only to envision and direct fiction scenes based on their violent acts, but to participate in them by playing themselves or their victims. Anwar and his friends are surprisingly happy to oblige: after all, their Hollywood idols were the hard-boiled, violent characters played by Al Pacino, John Wayne, and Victor Mature. The staged scenes are created according to the conventions of gangster films, noirs, Westerns, musicals, and horror flicks; connecting real-life atrocities to genre isn’t that much of a stretch here considering that Anwar borrowed many of his killing techniques from mafia movies, such as strangling his victims with wire or putting a table’s leg on someone’s throat before sitting on it. In one scene Anwar asks Oppenheimer to help him recreate a recurring beast from his dreams as though a creature from a cheap horror film. Anwar insists that the beast does not torment him, and that he does not associate it with the people he killed.

Oppenheimer maintains a fascinating tension throughout the film between the perverse pleasures that those filmic performances elicit for the killers and the horror we experience as viewers witnessing them. During the claustrophobic experience of watching The Act of Killing, in which we are confined for over two hours to the perpetrators’ twisted point of view, we search for visible signs of regret or guilt but hardly find any. “Killing is the worst crime you can do,” Anwar explains in one of his many self-conscious moments of confession. “So the key is to find a way not to feel guilty, find the right excuse.” The film excels in demonstrating how the government and media have been encouraging the silence of victims throughout the years, even supporting the perpetrators’ boastful public retelling of their violent acts. In one of the film’s most disturbing and unimaginable pieces of found footage, for example, Anwar and Herman participate in a national TV talk show, in which they elaborate on the various modes of violence used against their victims. “Was your method of killing inspired by gangster films?” the host asks with a wide smile; “Yes, of course.” A big round of applause. “Amazing!” the host continues, “He was inspired by films!” In such a bizarre and unsettling cultural climate, it is easy to understand how Adi Zulkadry, a fellow killer, has never been haunted by his acts: “I never felt depressed, never felt guilty, and never had nightmares.”

Having said that, Anwar’s case is dramatized in the film as an exception to this rule. During the five years of shooting The Act of Killing, Anwar went through a complicated process of transformation. He started the film completely repressing the moral weight of his acts, but he changes significantly following the intense dramatizations of his past. When we first meet him, demonstrating his unique and “not too messy” method for strangling victims with a wire, he tells us it was easy for him “to forget all this with good music, wine, and some Ecstasy pills.” However, he soon realizes that he will never be able to escape the consequences of his acts. In one of the last sequences, Oppenheimer stages a gangster-style scene in which Anwar is playing the role of the victim for the first time. He is interrogated and tortured intensively by Adi and Herman, only to be strangled in the end with the same barbwire he had used with his own victims. “I felt like I was dead for a moment,” he says. Shortly after, he boasts about the experience in front of his two young grandchildren and forces them to watch the scene on video (“Come see grandpa beaten up and bleeding”). Anwar then addresses Oppenheimer with a question: “Did my victims feel what I felt here?” Oppenheimer, in a rare and explicit moment of intervention, replies, “Actually, the people you tortured felt far worse, because you know it’s only a film, while they knew they are being killed.” The director then takes Anwar to the same place where he had tortured and killed his own victims. Very soon, a strong feeling of nausea overtakes him, and his stomach begins making unbearable, almost inhuman sounds of sickness. Put together with the previous sequence, these last fifteen minutes may seem, at first, as if they are encouraging the spectator’s sympathy for the perpetrator. Is Oppenheimer suddenly interested in tracing the visible signs of trauma on his merciless killers? The Act of Killing achieves much more than that. Anwar, who has never been put to trial, is finally paying a price for his horrendous acts and for the cinematic roller-coaster ride offered to him by the film. This climactic punishment reminds us that, even though the film takes on the point of view of the perpetrators, its perspective is finally with that of the victims.

The Act of Killing subverts the conventional ways of documenting evidence of persecution; it imagines a daunting, performative new method for the representation of barbaric massacre, as its playful title insinuates. Its investigative technique, which Oppenheimer himself calls “the documentary of the imagination,” does not simply serve as a mirror held up to the souls of evildoers. This would be banal and troubling. Instead, the strategy places the killers and their horrific acts within a very specific geopolitical context, insisting that any examination of the genocide in Indonesia should take into account the society in which those perpetrators lived. Essentially, The Act of Killing is focused on understanding how Anwar and his fellow murderers want to be seen and remembered. But the bigger picture keeps us wondering: what does it say about a society that has been founded on terrible crimes against humanity and that keeps celebrating these acts and granting power and fame to the people who committed them? When the film ends, leaving us gasping for air, it is the opening quote from Voltaire that keeps resonating: “All murderers are punished, unless they kill in large numbers, and to the sound of trumpets.”